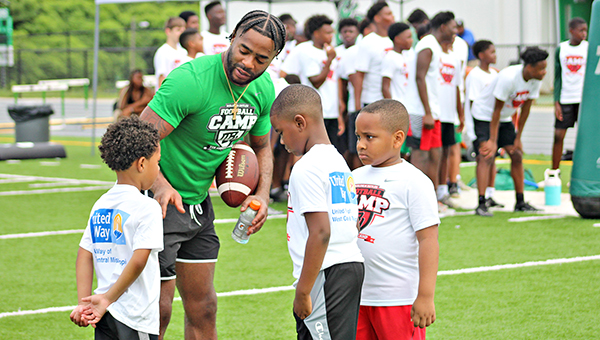 Malcolm Butler’s NFL journey has taken him to New England, Tennessee, and now Arizona. On Saturday, however, he returned to where it all started.

The Arizona Cardinals cornerback and two-time Super Bowl champion came back to his alma mater Vicksburg High for the Seventh Annual Malcolm Butler Football Camp. Nearly 300 players in grades 1-12 joined him for a few hours of drills, life lessons and fun on the turf of Memorial Stadium.

“I enjoy it. I come back and give to the community. I love the game of football and being active anyway, so these kids getting out here and getting some exercise, and they’ve got their hometown hero out here inspiring them,” Butler said. “I wish I had someone like me as a young kid growing up. I’m going to present the opportunities that I didn’t have to these kids.”

The camp at Vicksburg High for the first time since 2018. The 2019 camp was moved to Sports Force Parks because of construction at Memorial Stadium, and the 2020 edition was held virtually because of the COVID-19 pandemic.

Young players returned in huge numbers in 2021, with about a dozen groups rotating around the field. They worked with former and current VHS coaches — former Gator head coaches Tavares Johnson and Marcus Rogers were among the instructors — and Butler himself.

“I wouldn’t be able to do it without Vicksburg High School, all the sponsors, the coaching staff — they do a good job out here — my marketing guy, my agent, it’s just a total team effort,” Butler said.

Butler spent most of the final hour winging passes downfield to players who were going one-on-one against each other. He also went one-on-one himself a few times against some of the high school players in attendance.

Butler caught a pass against Vicksburg defensive back Eric Wesley, but was beaten on back-to-back plays by VHS receivers Tyler Henderson and K.D. Sims as the camp concluded.

Butler started the free camp in 2015, after his rookie season with the New England Patriots and his game-saving interception in the final minute of Super Bowl XLIX against Seattle. He won another Super Bowl with the Patriots two years later, and helped them reach a third in 2017.

Nearly an entire generation of players in Vicksburg and Mississippi have come of age since then, and many have come back to Butler’s camp each summer.

“I love doing these camps and seeing the same kids coming each and every year. I’m getting used to them. It’s just a great feeling to be out here inspiring these young kids,” Butler said. “There’s one guy, I see him each and every year, and he told me, ‘I’m going to see you in the NFL.’ I told him I’m going to be retired by the time you get there. But I love the kid’s confidence. He says the same thing every year, so I’m starting to believe him.”

Although younger and older groups were on the field at the same time, the camp was actually split into two halves. Younger players spent most of their time running drills and catching passes from Butler and other coaches, while the older ones went one-on-one against each other in a friendly but competitive workout.

“The atmosphere of being a kid is way different from hanging around all of the older kids,” said Donovan Coleman, a sophomore at Clinton High School who also attended the camp several years ago as a middle schooler. “Once you get older you do more stuff and you’re better at different things.”

Butler can relate to that.

The former Vicksburg High and Hinds Community College standout signed a one-year contract with Arizona this offseason, after he was released by the Tennessee Titans in a salary cap move.

Butler is coming off perhaps his best season in the NFL — he started every game for Tennessee, had 100 tackles and tied a career high with four interceptions. But he also turned 31 in March and, with seven seasons already in the books, is at the very least entering the back half of his career.

Butler wasn’t sure how much longer the NFL will have him, but said he has learned a valuable lesson over the years from veteran teammates — play as long as you can, and as long as you want. As long as he stays healthy, Butler said he believes he has a few more seasons left in the tank.

“I see a couple of grays in my beard, but I’m still moving. I’m still sticking with the youngsters,” he said with a laugh. “The NFL is a tough game. It’s a lot of wear and tear on your body. But it’s all about your mindset. How you take care of your body and if you’re willing to play the game. You can play the game as long as you want. It’s all a mind thing.”

St. Al coach Buck recovering after getting hit with…