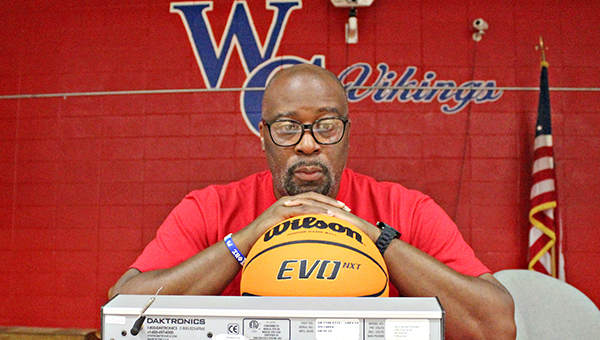 After winning two state championships as the coach at Hinds AHS, and brief stints at Port Gibson High School and Hinds Community College as an assistant, he had a place where he could enjoy the rest of his career helping to build a program from the bottom up.

“I love Warren Central. They welcomed me with open arms. The faculty, the staff, the coaching staff, they make you feel at home,” Williams said.

Plans change, though, and now Williams is the biggest Viking of all. Following four seasons as Warren Central’s ninth-grade coach, he was hired as the varsity head coach when Bruce Robinson retired earlier this summer.
The move up the food chain was a shock to many, including Williams.

“I would tell many people that I’m done. My wife and sons would tell me all the time that I wasn’t done,” Williams said. “When I came over here, it was really amazing. My son told me if Coach Robinson ever stepped down I would take over and I’d laugh at him and ask why he would say that. He said, ‘Because you love it over there.’”

Williams has had a long and successful career at programs just outside of Vicksburg. He was the head coach at Hinds AHS from 2000 to 2014 and won the MHSAA Class 1A championship in 2001 and 2010. The Bulldogs finished as Class 1A runners-up two other times in his tenure.

Hinds AHS closed at the end of the 2013-14 school year and Williams moved along Highway 18 to Port Gibson and Hinds Community College. He eventually came to Warren Central in 2017.

“When Hinds AHS closed, I had a couple of people trying to pull me over here. Knowing what I know now, I should have listened to them and came over. I’m a Viking,” he said.

Now that he’s leading a varsity program again, Williams will have the difficult task of getting it back on track. Warren Central had some success in nine season under Robinson. It won 22 games in the 2017-18 season, but was eliminated in the Region 4-6A Tournament in 2020 and finished 2-16 in 2020-21.

The Vikings struggled during Robinson’s last two years, in part, because of a double whammy of construction and COVID-19. The former took away their home gym — the team played games on the road or at Warren Central or Vicksburg Junior Highs last season — and the offseason program in 2020.

Williams said the Vikings got back to work this summer and took some steps in the right direction.

“We played a few games, made a few team camps. I was impressed,” Williams said. “In the summertime it’s not about wins and losses, it’s about growth. We saw some good things and we saw some bad things. There’s some things we have to change. But, just like anything, it comes. We’re putting our system in and getting them to believe what we expect out of them.”

“We’re not trying to reinvent the wheel with this style or that style,” he said. “People that know my reputation know that I’m a pressing, up-tempo type guy, but there are times where we can go half-court. Depending on the opponent there might be times when we have to do some half-court work, and when we do we’ll be prepared for it.”

Williams also is looking around Warren Central’s campus for inspiration. He pointed to the recent success of the school’s other programs and said there’s no reason his cannot emulate them. Warren Central’s boys’ basketball team has never won a state title, and has not played for one since the mid-1970s.

“The football team, the softball team, baseball team, have a winning tradition,” Williams said. “I feel now is the time for Warren Central Viking basketball to get on board.”