Designer Patrick Kelly, born and raised in Vicksburg, to have exhibition at Catfish Row Museum 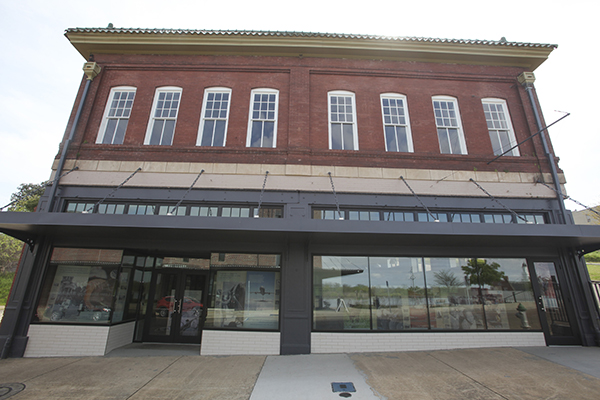 The Catfish Row Museum is located in the former Monte Carlo building in Downtown Vicksburg.

Vicksburg’s Catfish Row Museum will be opening an exhibit on August 24 featuring the work of a Vicksburg born and raised fashion designer.

Patrick Kelly started out designing window displays in Vicksburg, but quickly rose to fame upon moving to Paris in 1979 from the east coast where he had enrolled in Parsons School of Design earlier the same year. He was on the verge of becoming a household name before his early death in 1990 at the age of 35.

“He literally started with window displays in downtown Vicksburg when a lot of Black people weren’t able to go into the stores and try on a piece of clothing because they were Black,” curator of the exhibit Raymond Banks said. “But he was this young Black man that defied those odds. That’s just a huge accomplishment.”

Before his death, he had many accomplishments including being admitted to the Chambre Syndicale du Prêt-à-Porter, which governs the French ready-to-wear industry. He was the first American to ever do so.

Lauchlin Fields, project manager of the exhibit, said his work was really before his time. His fashion was quite controversial during his lifetime, mainly because of the golliwog dolls he used in his fashion shows.

“Patrick Kelly was ahead of his time in bringing attention to race through his work and creating space for conversations about race,” Fields said. “Through his work, he celebrated being Black.”

Banks said golliwog dolls were the equivalent of what Blackface is today, however, Kelly used his art to reclaim the racist doll.

“He put that racism into his clothes to show people though they were in the fashion industry, they were not removed from racism,” Banks said. ” Racism is there, but he played on that.”

Fields said at a young age Kelly saw the absence of Black models in fashion magazines and promised he would dress beautiful women of color in his designs. This was a big part of how Kelly influenced race, culture, and the fashion industry.

Banks said he marched and designed to the beat of his own drum. He said Kelly was true to his Southern roots and true to himself.

“You have a lot of designers that they follow trends,” Banks said. “Patrick Kelly didn’t follow the trend. He was the trend.”

Fields said the Kelly exhibit will allow people to see themselves in his work.

“Patrick Kelly was a Black man,” Fields said. “He was a gay man. He was a person with a dream, and he followed his own path to achieve greatness.”

Banks said that Kelly’s upbringing didn’t give him the most promising future, but he was determined to go up against the best and he did just that. Banks said it is important that people are aware of the artist talent in Vicksburg and this exhibit will hopefully allow people to experience that.

“They will get a chance to see his humble beginnings to where he ended at,” Banks said.

The exhibit is called  “Nothing is Impossible: Patrick Kelly — from Vicksburg to Paris.” Fields said she hopes it inspires people to believe that nothing is impossible for them and that they benefit from his story.

The exhibit will feature Kelly’s designs that are full of references to Black culture. Nods to the culture include jungle prints, polka dots and bandanas. His work displays his signatures through buttons, plastic hearts and the golliwog dolls. There will also be videos of his life and career.

The exhibit will be open during Kelly’s birthday when he would have turned 67-years-old. To honor his legacy and life, the exhibition team will be putting on a fashion show lead by Banks on September 24.

“I’m hoping we can create an experience to allow visitors a snapshot of what a Patrick Kelly runway show was like,” Fields said.

Banks said the show will feature young designers throughout the South who he feels embody what Patrick Kelly is. He said the planning is still underway, but the show will be amazing.

“I hope people who come to celebrate the life of Patrick Kelly at this exhibit can look at his life through the lens of where we are today with race and culture and fashion,” Fields said.

Nominate a Vicksburg restaurant for the Best Egg Dish…