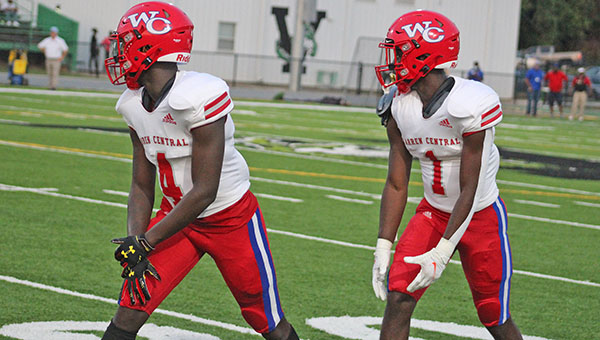 Even with a 2-0 start in the bag, Warren Central head coach Josh Morgan insists it’s not wise to look too far ahead on the schedule. The big picture, though, is a big part of what makes this week’s game so important.

The Vikings will wrap up their non-region schedule when Germantown (2-0) comes to town on Friday night. It’s a chance to head into a bye week undefeated for the second year in a row, and with a ton of positive momentum when defending MHSAA Class 6A champion Oak Grove visits for the Region 3-6A opener in two weeks.

“Momentum is very powerful, especially in football and heading into a bye week. We want to go into that with a very sound idea of our identity — this is who we are, this is how we’re going to win, and hopefully polish up as we’re heading into district,” Morgan said. “It sure does help when you’re riding momentum into that week instead of sitting around dwelling on it, because that two weeks seems like an eternity at that point.”

Warren Central has gotten to 2-0 with a pair of outstanding defensive efforts. It has allowed less than 300 total yards and six points in wins over Forest Hill and Vicksburg. After giving up a touchdown on the opening drive of the game last week, it held Vicksburg scoreless for the final 3 1/2 quarters.

Only four of 18 opponent possessions have reached the red zone so far. One of those started at the WC 32-yard line following a turnover and resulted in no points.

It’s been an encouraging start for a defense that replaced all of its starters on the line and in the secondary, but Morgan said the unit still has a lot of things to clean up.

“We’re far from satisfied. There’s areas we’re going to have to get better at. We’re going to play different offenses that try to attack you in different ways, and we have to be ready for all that comes with it,” Morgan said. “The potential is there. We have to make sure we’re reaching that potential. We have the potential to be a very good defense, but we’re definitely not there yet. We’ll try to get there as fast as we can.”

Based on the challenge facing them the next couple of games, the Vikings might need to get there in a hurry. Before the looming threat of Oak Grove becomes reality, they’ll need to stop one of the best running backs in the country. Germantown’s Branson Robinson has committed to Georgia and is the top college recruit in Mississippi.

Robinson has rushed for 201 yards and five touchdowns in the first two games this season, after he had 1,179 yards and 15 TDs in 2020. The 5-foot-10, 220-pounder brings an outstanding combination of size and speed that Morgan said is tough to bring down.

“He’s big. And he’s strong. And he’s fast. He is very well-deserving of all the accolades that he gets. He is as good as advertised,” Morgan said. “We’ve done fairly well over the past couple of years (against Germantown). We’ve done it as a unit, and we’ve done it with pursuit. Hopefully we can emulate that plan. Pursuit is going to be important, because usually the first man doesn’t get him. If you don’t have your mind right, he can tear you up.”

Robinson is Germantown’s biggest star, but hardly their only one. Defensive tackle Zxavian Harris is an Ole Miss commit who had 48 tackles and four sacks last season, and 11 tackles in the first two games of this one. Linebacker Devin Arrington and safety Bo Eldridge both have more than 20 tackles already, and wide receiver Tony Knight Jr. has nine receptions for 139 yards and a TD.

It all adds up to a talented and difficult opponent to deal with.

“They’re a good football team. We know the type of effort it’s going to take from us,” Morgan said. “Anytime you play a running back like (Robinson) he has the potential of breaking a game open, and it requires you to be on point. You’ve got to rally to the ball. Germantown is going to be a playoff team, and we’re both in that same boat right now of trying to get momentum going into a tough district.”

Looking down the road, as much as they might not want to, Morgan added that the Vikings’ new region is not any easier than their old one. Although they’ve ditched North State championship contenders like Starkville, Oxford and Madison Central — the latter two are ranked Nos. 2 and 3, respectively, in this week’s Associated Press Class 6A poll — they’ve picked up Oak Grove and perennial playoff teams like Northwest Rankin, Pearl and Brandon.

That’s still a few weeks away, though.

“We’re going to see and play in one of the toughest districts. It feels like we have this conversation every year. We can’t even begin to look up or down the road,” Morgan said. “This is the last game of our non-district, and the task at hand is trying to be undefeated coming out of it, and putting ourselves in a position where we want to play well against a really good Germantown team and finish that first season.”