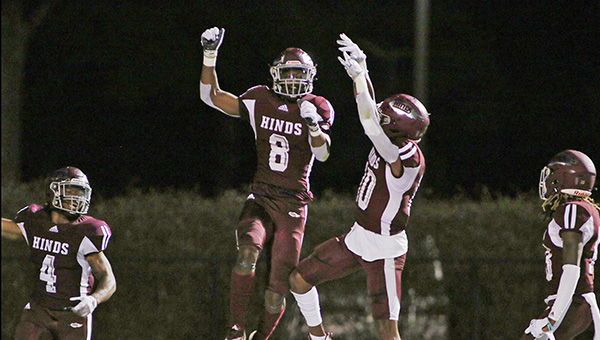 RAYMOND — Hinds Community College turned a huge deficit into one of the biggest upsets of the Mississippi junior college football season.

The Eagles trailed by 28 points after Philip Short threw a 65-yard TD pass to K.T. Hicks to give Gulf Coast a 31-3 lead with 13 minutes left in the second quarter.

“I told these guys we have to stick to together as a family,” Hinds head coach Larry Williams said. “It goes a long way when our team plays together.”

Hinds (3-1, 1-0 MACCC South) scored three touchdowns in the second quarter to get back in the game. Former Vicksburg High star Cedric Phillips had an 8-yard TD run, Pittman scored on a 15-yard run, and McCray threw a 44-yard pass to Thomas to cut it to 31-23 with 1:11 left in the second quarter.

Pittman then scored on runs of 1 and 67 yards to put Hinds ahead 36-31 midway through the third quarter.

Gulf Coast (3-1, 1-1) regained the lead with a pair of field goals by Dylan Wasson, before McCray and Thomas hooked up for the game-winning touchdown pass in the final seconds.

Gulf Coast got a long kickoff return by Hicks to get across midfield, but a Hail Mary failed as time expired.

“It was a strange, strange game,” Gulf Coast coach Jack Wright said. “It was almost like things came too easy at first. And then their talent showed. They’re a good football team. They’ve got a great quarterback who continued to make plays all night, and you’ve got to give them credit. For getting out of the hole they dug for themselves.”

Itawamba led 17-14 after Shane Lasher kicked a 32-yard field goal with 8:37 left in the third quarter, and then Jones took over. Hawkins threw touchdown passes of 23 yards to Chad O’Neal Jr. and 31 yards to Bud Tolbert, and Robert Henry ripped off a 46-yard touchdown run to give the Bobcats a 35-17 lead with 1:21 left in the game.

Hawkins finished 15-of-27 passing for 162 yards and two touchdowns for Jones, while La’Damian Webb rushed for 135 yards and two TDs.

Michael Hiers led Northwest to the win by completing 23 of 33 passes for 327 yards and three touchdowns. E. Jai Mason and Tyson Keys each had 94 yards and one touchdown receiving, while Jamarien Bracey scored twice on the ground.

Sam Brumfield had two of Northwest’s six sacks on defense, as well as a forced fumble.

Northeast quarterback Carter Putt threw a touchdown pass and ran for another score.

Pearl River only trailed 14-13 at halftime, but Co-Lin scored 34 straight points to blow the game open. Colton Gardner threw two touchdown passes in the second half, and Ques McNeal returned an interception 22 yards for a touchdown late in the third quarter.

Keyser Booth turned a short pass into a 73-yard touchdown to give East Central a 14-13 lead. Larry Wilson ran for 108 yards and a TD for the Warriors, as well.

The teams combined for 19 punts and nine turnovers. East Central was 0-for-12 on third down attempts, while Southwest was just 2-for-14.

East Mississippi quarterback Jamari Jones threw a 14-yard TD pass to Zias Perryman, a 13-yarder to Jontarius Henderson, a 46-yard strike to Zach Patterson, and added a 28-yard TD run of his own to give the Lions a 49-0 lead at halftime.

Drew Tuazama had a 4-yard fumble return TD for East Mississippi’s other first-half touchdown. Three of the five touchdowns came in a span of less than two minutes.