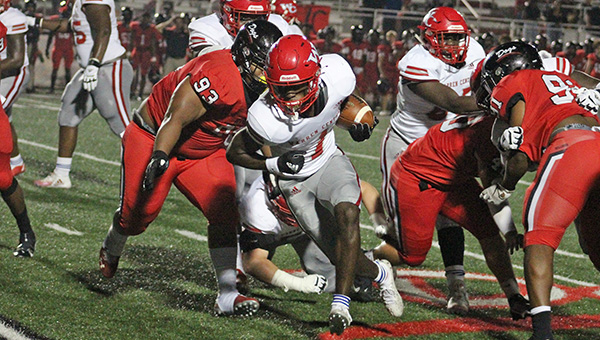 Warren Central's Trey Hall (1) runs through a hole in the first half of Friday's game against Brandon. (Ernest Bowker/The Vicksburg Post)

BRANDON — Every time Brandon scored on Friday night, it shot off a small cannon that left a cloud of smoke lingering over the field for several minutes.

Or, at least, that’s what it seemed like. The smoke could just as easily have been from the rubber pellets in the turf that the Bulldogs burned as they blitzed up and down the field.

Brandon’s up-tempo offense scored 31 points while running 60 plays in the first half, helping it build an insurmountable lead that led to a 38-20 victory over Warren Central.

Brandon (3-2, 2-0 MHSAA Region 3-6A) scored on five of its six possessions in the first half while snapping the ball every 15 seconds on average.

“The tempo gave us some problems for sure,” Warren Central coach Josh Morgan said. “The big thing was the tempo. It wasn’t necessarily the plays and the things that come along with that. I don’t think we executed well. We got into some depth issues. I think that got us a little exhausted and being misaligned and busting some assignments. We did not handle the tempo very well and they did.”

Jalen Ballard kicked a 35-yard field goal on the Bulldogs’ opening drive, and then Durr scored on fourth-and-goal from the 1-yard line on their next possession for a 10-0 lead. The two drives included 24 plays but only took a combined six minutes off the clock.

Durr’s touchdown also highlighted another problem for Warren Central (3-2, 0-2). It allowed Brandon to go 9-for-14 on third down chances, and 3-for-3 on fourth down. Last week, the Vikings gave up two fourth-down conversions in a loss to Oak Grove

“We’ve got to do a better job at it. We’ve worked on it and are going to continue to work on it until we get better at it,” Morgan said of the conversions. “Our tackling in space is not very good right now. It’s one thing we pride ourselves on, is being a well-tackling unit. Uncharacteristically, we just did not play very well in the first half, defensively-speaking.”

Warren Central answered Brandon’s two early scores with one of its own. Mark Gray scored on a 17-yard run with 36 seconds left in the first quarter to cut it to 10-7.

Again, however, Brandon pushed the pace and got the points right back. It ran four plays in the final 29 seconds of the first quarter, and six more in the first 90 seconds of the second. The last was a swing pass from Varnes to Devin Thigpen that the receiver took up the right sideline for a 28-yard touchdown.

Thigpen finished with 11 receptions for 116 yards and the one TD.

After WC went three-and-out, Brandon had a 17-play scoring drive that only took 4:18 off the clock — leaving plenty of time for another. Durr capped the long drive with a 1-yard run, and then Blount scored on a 3-yard run with 1:20 left in the half to put Brandon ahead 31-14.

Warren Central managed to score in between, on a 40-yard TD pass from Jack Wright to Preston Lynch. That followed a 34-yard completion on the previous play, but the Vikings were simply unable to keep up or get the stops they needed to get back in the game.

Wright scored on a 1-yard quarterback sneak early in the fourth quarter to cut it to 31-20, but Brandon answered again with a much slower and more methodical 11-play drive capped off by Varnes’ 16-yard TD run with 3:40 to go.

“If you get stops it eliminates that, and we had opportunities. We had a fumble on the ground early on and some opportunities to get off the field. When you stay on the field against tempo it’ll wear your butt out,” Morgan said.
Wright finished the game 11-of-22 passing, for 116 yards and one touchdown, to go along with his rushing TD. T.J. Thompson ran for 101 yards on 15 carries, and Lynch caught six passes for 74 yards and one TD.

The loss dropped Warren Central to 0-2 in region play for the first time since 2010. It will try to rebound next week at home against Northwest Rankin, in a strange spot where it might need a win to keep its playoff hopes alive despite it still being early in the region season.

“We go one day at a time. We have to understand the situation to make sure we can address it the right way. We know all the chips are on the table,” Morgan said. “It goes back to the way you approach it all. You have to earn it to get into these playoffs. My job will be to keep our team together and focused, and continue to improve and take it one week at a time.” 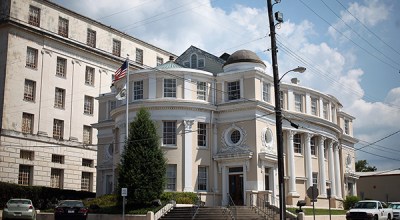