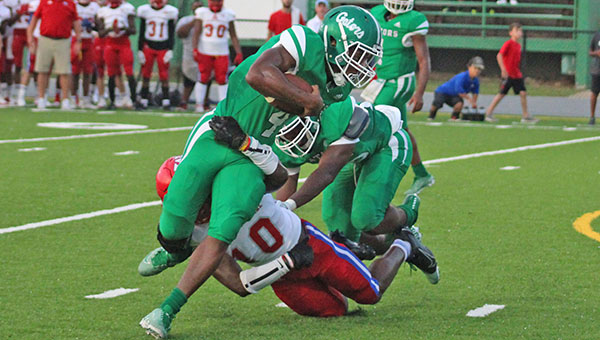 The last couple of times Vicksburg High was in the middle of the Region 2-5A playoff race, its fate was not determined until the very end of the season.

Having a chance to settle matters before the leaves change color and the grass has been cut for the final time is a welcome change.

A win and some other favorable results would definitively clinch a playoff spot, while a win alone would get them most of the way there.

It makes this midseason matchup a crucial one for a program that hasn’t had a winning season since 2016 but appears on the brink of turning a corner to much bigger things.

“Last year it came down to the last week or so, and for us to go ahead and get in in the mid-point of district play is awesome,” Vicksburg coach Todd McDaniel said. “Then we can focus on treating every game as a playoff game, because then we’re trying to win the district.”

Vicksburg has not won five games in a row since a six-game winning streak in 2008. The current run has erased the memories of back-to-back losses to start the season, but McDaniel said the Gators are also trying not to look too far ahead.

The next couple of weeks will bring showdowns with fellow Region 2-5A frontrunners Neshoba Central and Ridgeland, and a chance to win the program’s first region championship in 31 years — all assuming, of course, that they get past Callaway first.

While Vicksburg’s defense has stolen the headlines this season, its offense has piled up tons of points. The Gators have outscored their four region opponents 178-0 and are averaging nearly 300 rushing yards per game. They are scoring 33 points per game overall, and 44.5 in region play.

McDaniel said it should be more. The Gators have had nearly a dozen touchdowns taken off the board because of penalties. Still, he’s pleased with how the offense is clicking and helping Vicksburg become a complete football team.

“Our offense is our defense. I love nothing more than to see our defense on the sideline drinking Gatorade,” McDaniel said. “You’ve got to have the ball to score, and when we drive the ball down the field on two or three occasions and the score is 14 or 22-0, that puts them in panic mode and makes our defense play even faster.”

This will be the first of two Thursday night games for Vicksburg in a four-week span. Their regular-season finale at Holmes County Central was moved up one day to Nov. 4 by the MHSAA because of a statewide shortage of officials. This one is on Thursday because of a field-sharing arrangement among teams in the Jackson Public Schools district.

McDaniel said playing a day early was not a big deal. Vicksburg played three times on Thursday in 2020 and won two of those games.

“Now we’re just going in and adjusting certain things or adding a wrinkle here and there,” McDaniel said. “I believe it’s probably better for us than it is for them, because you don’t see the wing every week. They can only line up in a certain amount of fronts. I think we’ll be fine. We just have to hone in and understand how important the game is.”