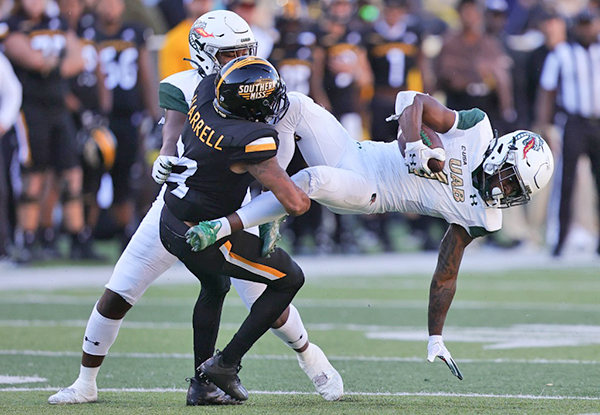 HATTIESBURG — Southern Miss lost another quarterback, another game, and increasingly it seems, another season.

Dylan Hopkins threw for one touchdown and ran for another, and UAB scored 28 points in the second quarter on its way to a 34-0 win over Southern Miss on Saturday.

Noah Wilder had 14 tackles to lead a defense that held the Golden Eagles to 107 yards of offense while recording three sacks. Grayson Cash blocked a punt and recovered it in the end zone.

Southern Miss (1-6, 0-3 Conference USA) lost its fifth game in a row and will need to run the table in its last five games to avoid a second consecutive losing season.

“Obviously, five straight losses are not easy to deal with. Nobody likes losing. We’re a very prideful group, competitive group. To be in a stretch like this, it’s very humbling, but you can learn a lot,” Southern Miss linebacker T.Q. Newsome said. “There’s not much that’s going to make us quit and you can see that in the second half of this game. We were down 31-0 but only allowed three points in the second half. I think that is a tribute to the culture we are trying to build, it’s a tribute to the attitude that we have as a team and are building as a program.”

In six games against FBS competition, Southern Miss has not scored more than 14 points in a game and has seven offensive touchdowns. Saturday marked its first shutout loss since the 2014 season opener against Mississippi State.

The Golden Eagles had nine first downs and nine punts against UAB (5-2, 3-0). Their best offensive weapon was running back Frank Gore Jr., who had 40 rushing yards on 13 carries. The Golden Eagles’ longest play from scrimmage was a 14-yard pass from Lange to Jason Brownlee on their opening series.

Adding to its offensive misery, Southern Miss had another quarterback go down with an injury. Jake Lange, a true freshman making his second start — he entered the lineup after two other QBs were hurt earlier in the season — injured his ankle in the first half.

Lange was replaced by another freshman, Tee Webb, who was 2-for-5 for 5 yards, threw one interception and was sacked once in two series. Lange was 3-for-10 for 18 yards before exiting.

Southern Miss head coach Will Hall said the decision to sit Lange in the second half had more to do with the way the game was going than the severity of his injury.

“(Lange) could have played in the second half. We just felt like with the way the game was going and the game being out of hand that we’d give some guys a shot to try to keep him healthy for the rest of the year,” Hall said. “He’s had an ankle, he should be back. He could’ve played and he wanted to play. He’s a tough kid, but we thought we’d give Tee a shot and just try to keep Jake healthy for the remainder of the year. With an off week coming up, knowing we’re going to Middle (Tennessee) next, we wanted to try to salvage him right there.”

Webb played two series and was replaced by running back Chandler Pittman, who went the rest of the way. Pittman completed his only pass, a 9-yard gain to former Warren Central star Demarcus Jones, and ran for 24 yards on six carries.

“We were going to play Pittman some at quarterback in this game anyway, we thought he gave us a little bit of a spark in the run game,” Hall said.

UAB led 3-0 after the first quarter, and then quickly blew it open in the second.
Hopkins and Gerrit Prince hooked up for a 34-yard touchdown on the first play of the second quarter and then Cash made his big play on special teams barely a minute later to put the Blazers (5-2, 3-0 Conference USA) up 17-0.

DeWayne McBride scored on a 31-yard run the next time UAB got the ball and late in the quarter Hopkins capped a drive with a short run to put the Blazers ahead 31-0. McBride finished with 137 rushing yards on 17 carries.

Matt Quinn’s second field goal, a 52-yarder in the third quarter, was the only scoring in the second half.

Once we got rolling in the second quarter, it really just took off,” UAB coach Bill Clark said. “That was a top to bottom effort, the offense was sharp and the defense played well the whole day. Then with special teams, the blocked punt, and the field goal, they put in a solid performance all day. Great effort.”