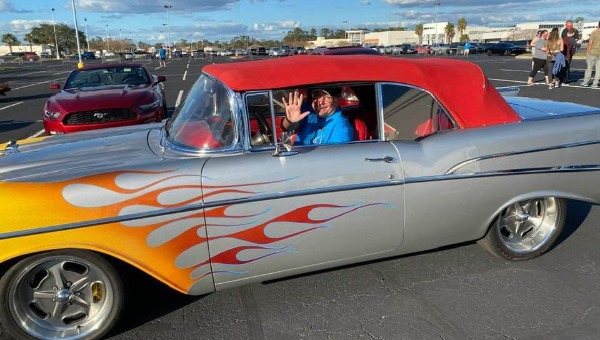 Cruisin the Coast raffled off this 1957 Chevrolet Bel Air convertible as part of their 2021 event on the Mississippi Gulf Coast with $40,000 from the proceeds benefitting the Make-A-Wish Foundation of Mississippi. (Photo courtesy of Cruisin the Coast)

Considered across the nation as the premier car show event, Cruisin’ the Coast wrapped up its weeklong event along the beautiful Mississippi Gulf Coast recently. Celebrating its 25th anniversary, “America’s Largest Block Party” was attended by car enthusiasts from across the country and many from Warren County and Central Mississippi helped make the celebration a huge success.

Those unfamiliar with Cruisin’ the Coast might not know the event began as an economic development initiative in 1996 to lure more tourists to the Mississippi Coast during a season when tourism dollars were low and hotel occupancy was down. That first year saw just 374 vehicles register for Cruisin’ the Coast, which was held in Gulfport’s Jones Park and was just a 4-day event.

To say CTC has exploded in the years since is an understatement. CTC is now the top tourist draw in Mississippi, generating nearly $30 million to the state economy during the most recent economic development study five years ago. A similar economic study was conducted this year and results will be available in the coming months.

The 8-day event held the week before Columbus Day now spans the entire Mississippi Coast, from Bay St. Louis to Pascagoula and includes seven block parties in 11 different participating cities. CTC has become such a big hit with car enthusiasts that readers of USA Today have voted the event their favorite car show in the nation three of the last four years.

Besides the tremendous economic benefit to the state, Cruisin’ the Coast also gave something back to the Make-A-Wish Foundation of Mississippi. For the 12th year in a row, CTC sold raffle tickets for a classic vehicle with a portion of the proceeds going to the foundation that supports children. This year, CTC raffled a 1957 Chevrolet Bel Air convertible and presented a $35,000 check, as well as a $5,000 bonus check, to the Make-A-Wish Foundation of Mississippi on the final day of the event.

Those classic car enthusiasts who registered their vehicle and travelled to all six stamping venues along the Mississippi Coast were eligible for monetary prizes. 50 lucky winners each received a $500 check during a final day drawing at Cruise Central, which is now located at beautiful Centennial Plaza Resort in Gulfport.

Several dozen of those car enthusiasts came from the Vicksburg and Central Mississippi area to participate and admire the classic vehicles. They were treated to not only the incredible vehicles that cruised along Highway 90’s Beach Boulevard, but also the fantastic entertainment that was presented at each venue along the 40-mile stretch of beach during the week. The festive celebration culminated on what was billed “Super Saturday” where a free show band performed the biggest hits from the Motown era, followed by a spectacular fireworks show at Hollywood Casino Resorts in Bay St. Louis.

Cruisin’ the Coast no doubt has become a huge event for the Mississippi Gulf Coast in particular, but the entire state continues to benefit economically with no signs of moving out of the fast lane. In fact, more than 1,000 car enthusiasts registered their vehicle for the 2022 event prior to heading back home.

Rob Sigler is the former managing editor of The Vicksburg Post and now a member of the Cruisin’ the Coast team as assistant registration director.