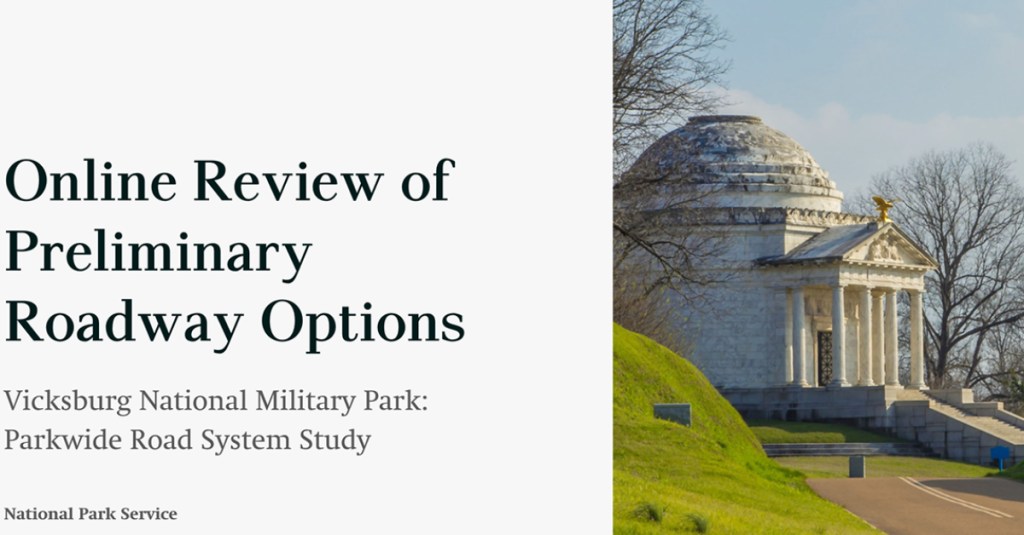 The National Park Service is using an online "Story Map" tool to gather feedback in its second phase of comments for the repairs to multiple slides on roads in the Vicksburg National Military Park.

The public will be able to take a virtual tour of the Vicksburg National Military Park’s road system as the National Park Service begins its second round of public comments on the VNMP’s Park-wide Road System Study.

The 30-day comment period runs from Thursday through Dec. 3.

Brendan Wilson, chief of interpretation, education and partnerships at the Military Park, said the virtual tour and comment period is the second phase of the park’s efforts to get public comments as part of a National Parks Service study on the park roads. The initial public comment period ran from June 2 to July 2.

The virtual tour is conducted through a website called the “Story Map,” which features a map of the park and photographs of the damage at four sites caused by erosion following heavy rains that hit the Warren County area from January through April: Battery de Golyer bridge, Grant Avenue, North Union Avenue and the Vicksburg National Cemetery. Each stop is highlighted on the map.

At each stop, visitors to the website can see the National Park Service’s options to repair the problem and are asked to give their own comments on the problem and possible solutions.

“We are pleased to offer this interactive opportunity to hear from the community and stakeholders concerning their experiences and to help explore measures to ensure the long-term sustainability of the park’s road system,” said Carrie Mardorf, acting superintendent for the Vicksburg National Military Park.

The NPS is conducting the road study after decades of erosion and hillside slope failures driven by the Park’s naturally vulnerable soils. Since November 2019, according to Park Service officials, heavy rains have further eroded roads and hillsides in the park, causing earthen roadway structures to fail. As a result, vehicle access has become limited, with one-third of the park’s roads closed.

The completed study will provide recommendations for options to manage the Park’s roadway structures more sustainably, explore new alignments for roadways and assess the reduction and addition of elements, according to a May news release from the park.

Wilson said people interested in making comments for the study can go to the story map at https://arcg.is/ybm9q. The website, he said, will allow people to make comments and provide contact information.

“At any time between now and Dec. 3 people can go in and explore the story map and leave their comments,” Wilson said.