Warren Central heads to the Coast for round one 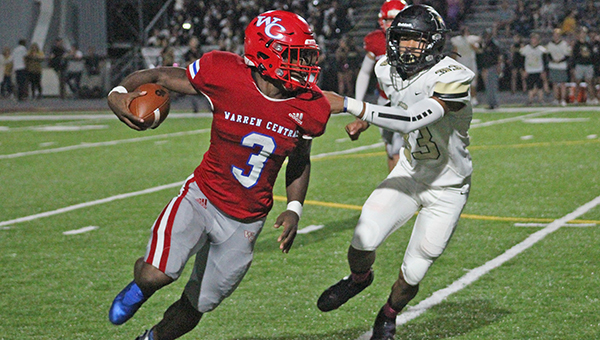 Warren Central running back T.J. Thompson (3) has run for 287 yards and five touchdowns in his last two games. The Vikings will travel to the Coast on Friday to play D'Iberville in the first round of the MHSAA Class 6A playoffs. (Ernest Bowker/The Vicksburg Post)

For a quarter of a century, Warren Central has gone to Jackson and taken a left for its playoff road trips. Far-flung northern destinations like Horn Lake, Batesville and Tupelo promised chilly temperatures and difficult matchups against some of the best football teams in Mississippi.

This time, they’re going to the beach.

The Vikings (7-3) will turn right and head south on Friday when they travel to D’Iberville (10-1) for the first round of the MHSAA Class 6A playoffs. It’s a brand new opponent — the teams have never played each other — as the road to a state title begins.

“It’s that third season. The approach won’t be any different. We understand what’s at stake here,” WC coach Josh Morgan said. “We feel like we have a good matchup. D’Iberville is a very good football team and they play a tough brand of football. They’re a very physical opponent and have been successful for a lot of years. I think the biggest disadvantage we have is making the trip. But we’ve been in this situation before. We’ll try to handle that the right way and turn this into a plus for us.”

Although Friday is the official start of the postseason, Warren Central has essentially been in playoff mode for the past month. It ran the table after a three-game losing streak to finish third in Region 3-6A, winning four consecutive do-or-die games and seemingly getting better while doing it.

The Vikings outscored their opponents 107-34 during the winning streak. The defense posted two shutouts, and the offense scored 31 or more points in each of the last three games.

Morgan rattled off a long list of players who have stepped up their games in recent weeks to help turn things around. Running back T.J. Thompson had 183 yards and a touchdown in a 31-21 win over Meridian last week, while wide receiver Preston Lynch caught five passes for a season-high 154 yards and two touchdowns.

Defensively, Jashun Simon had 10 tackles and two interceptions. Linebacker Floyd Davenport has surpassed the 100-tackle mark for the season.

On special teams, kicker Brandon Gilliam has made a field goal in three of the last four games — including the game-winner as time expired in a 3-0 victory over Pearl and a 40-yarder against Meridian. Jaevian Mims has blocked a punt in three consecutive games.

“We had some guys that made some big plays. We’re starting to get to where we’re making plays and competing at a really high level,” Morgan said. “I still feel like we’re getting better. We’re definitely a hot team coming in and we’re preparing to win and expecting to win. That’s our mindset at this point in time. We’re going to have to have a great week of preparation and earn every bit that we get because this team is not going to beat themselves.”

D’Iberville is one of the traditional football powers along the Coast and is enjoying another strong season. Its only loss was to undefeated Ocean Springs — the No. 1-ranked team in Class 6A in the Mississippi Associated Press poll — and it started 10-0 last season before losing in the second round of the playoffs.

The Warriors run a Wing-T offense that wears down opponents, but that Morgan felt was a good matchup for his defense. Warren Central played one other Wing-T opponent this season, squeaking out a 7-6 victory over crosstown rival Vicksburg in Week 2.

Morgan said having seen a Wing-T team will help his defense understand the scheme, but making plays against it will still be a challenge.

“It’s better than not seeing it at all. Vicksburg’s the only team that plays it that we’ve played in recent years. There’s a little familiarity there,” Morgan said. “But that’s the type of brand they want to play — control the clock, control the game, take shots when they see fit. That’ll be the challenge. And they’re also very physical on the defensive side of the ball.”

As much as skill, Morgan said the Vikings are counting on momentum to carry them through to the second round. They’ve been one of the hottest teams in Class 6A over the past month — they’re one of six teams in the 16-team bracket entering the postseason with a winning streak of four games or more — and have clearly ironed out the rough spots that hurt them early in the Region 3-6A schedule.

Warren Central has always had a reputation for playing tough, gritty football and finding a way to win. It’s a formula that has worked for years, and especially the past month, and Morgan is hoping it works again.

“The type of brand they play is good, and they’re probably the most physical team down on the Coast,” Morgan said. “With us having the momentum we have and being the team that we are, we feel like we can compete with anybody. We’re grateful for that opportunity. We have a good situation and we have to make the most of it, and that’s our plan.”