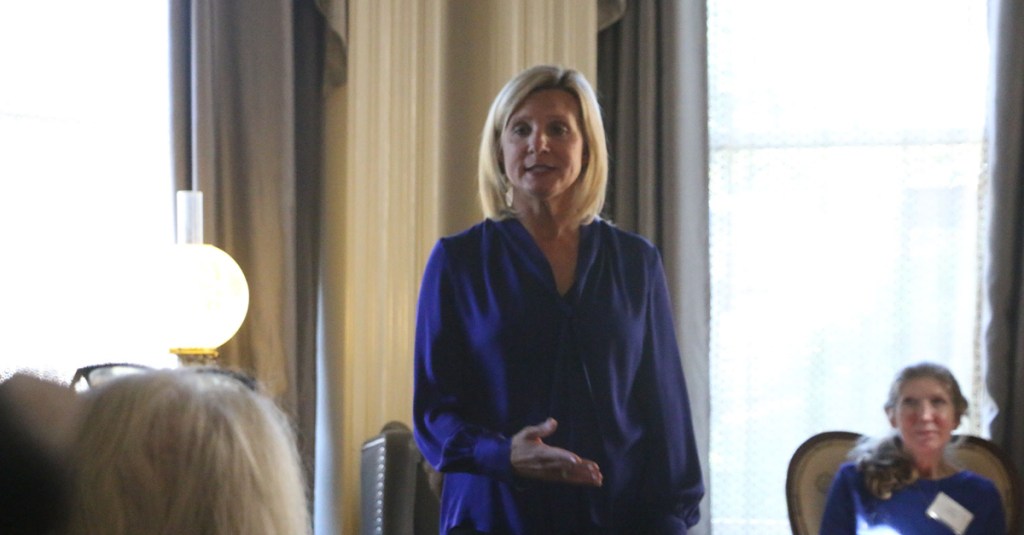 The Sampler Antique club hosted a distinguished guest at its November meeting on Friday.

First Lady of Mississippi Elee Reeves was in attendance, while also serving as the club’s guest speaker.

Held at the Belle of the Bends, home of Dr. Steven and Kendra Reed, Reeves was introduced by Vicksburg Mayor George Flaggs, Jr. prior to speaking to the group.

As First Lady, Reeves shared with the club members a bit of the history of the Governor’s Mansion and the lighter side of what it is like for her family to live in the historic home.

While there are the historic and touring parts of the home, Reeves said, the family lives in the mansion’s private quarters, which was like an “empty apartment” upon move-in.

An empty three-bedroom apartment, it was not the space the family had been used to with three daughters.

“We had originally thought we would let the two oldest share a room,” Reeves said, but the girls had their own idea as to where to live — the playroom downstairs.

“They never come upstairs,” Reeves laughed. “Only to eat, and that’s about it,” she said.

Reeves said her youngest daughter has also acclimated to their new home.

“She loves it. She plays. She runs around and thinks everybody is there to entertain her,” Reeves said, adding, “She even has a ghost app on my phone.”

Luckily, there have only been friendly spirits, Reeves said, found residing in the home.

The Mississippi Governor’s Mansion was completed in 1841, Reeves said, and it is the second-oldest governor’s mansion in the U.S. – Virginia being the oldest.

During its 180 years, the mansion has maintained its stature, surviving two near-fatal mishaps. One was when it was used as the command post for Gen. William T. Sherman and wasn’t burned like most of Jackson during the Vicksburg campaign. And two, when the Mississippi legislature considered selling it at the beginning of the 20th century due to rising real estate prices in Jackson.

Fortunately, a “Save the Mansion” campaign was enacted, and the home continued to stand.

In 1975, the mansion was designated as a National Historic Landmark and in 1980, the state legislature gave the mansion and the building and grounds to the Mississippi Department of Archives and History.

“At this time, a Friends of the Mansion committee was formed through the Department of Archives and History and was designed specifically for the preservation of the historic part of the governor’s mansion,” Reeves said.

Funds raised through this committee have slowly dwindled and in 2020, Reeves said, she and the Governor decided to reinstate the program.

“We decided to instead of just making it a fundraiser, also make it a volunteer project,” she said. “And this committee could help host events, help us with the garden or really any aspect of any public event going on at the mansion.”

Being a member is not just all work and no play. Reeves said each year, a garden party and a Christmas party are held for the committee.

Currently, there are about 200 members, Reeves said, and for anyone interested in joining, the cost is $50.

As an avid Girl Scout supporter, Reeves said, the Friends of the Mansion committee allows her to employ one of the scouts’ mottos: A Girl Scout always leaves a place cleaner than she found it.