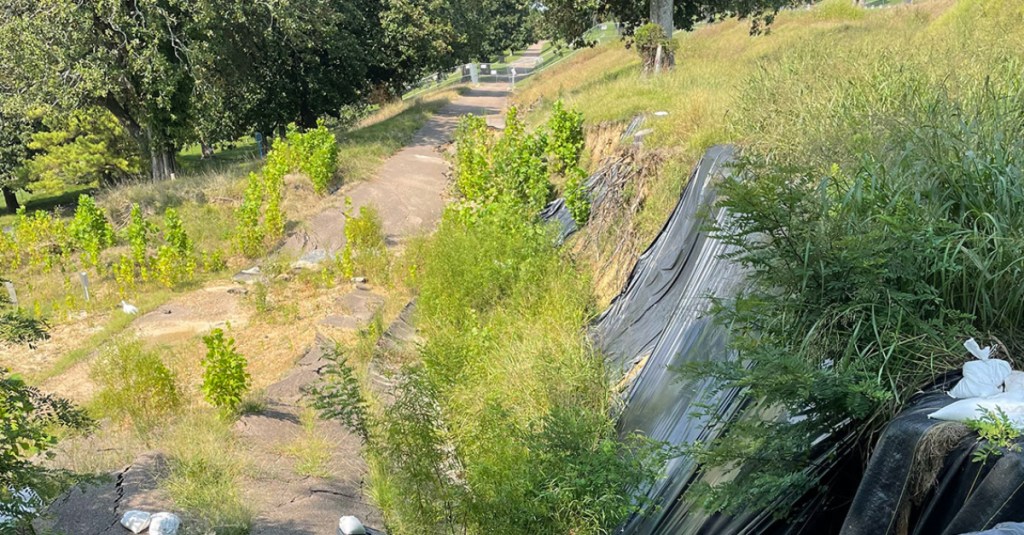 Visitors to the Vicksburg National Military Park could see some work beginning toward repairs to the road in the park’s national cemetery after the first of the year.

“We’re getting closer,” Interim Park Superintendent Carrie Mardorf said. “I would say in the next six months you’re going to see some activity. That’s my goal.”

Mardorf, however, said it could be 2 to 3 years before the damaged section of the road would be replaced.

“We’re working as quick as we can, especially with a very complicated slope that has fallen before in the past,” she said.

The problems with the cemetery road go back to February 2020, when heavy rains fell in the Warren County area, causing landslide and erosion problems across the county.

The damage to the road was discovered on Feb. 11, when the cemetery’s maintenance crew noticed some cracks appearing in the pavement, forcing park officials to close the tour road and monitor the cracks. Two days later, officials discovered a massive road failure caused by erosion, which also degraded the slope in the cemetery and exposed several graves.

Since then, Mardorf said, park officials have undertaken a three-step approach to get into a position to address the landslide problem.

“First, we had to take an inventory of what truly happened,” she said. “Since February 2020 to now, the park has done a number of geologic studies, archeological studies to figure out the number of landslides, the number of burials affected and where do we go from here.

“We finally have a general idea of where we need to go. The overall project is pretty complex and very interrelated. The first step is to identify the burials that have been affected and secure those remains that have to be disinterred and we are working through the planning stages on that so those people will be cared for.”

The second step, she said, is to stabilize the area.

“We are working with the U.S. Army Corps of Engineers Vicksburg District to come up with a geotechnical solution to stabilize that erosion area.

“They have spent a significant amount of time pulling together additional studies and we’re finally at a point where we are moving closer to have some draft construction drawings.

“Once those construction drawings are finalized we’ll have a better idea of the impact, cost magnitude and then we can be ready to proceed with the repairs,” Mardorf said.

“There is a link section on the cemetery where we are asking the public to provide feedback on what they think the cemetery should be in the future,” Mardorf said. “We’re asking people some very general questions: Should cars be allowed in the cemetery? Should it be closed to bikes and pedestrians? We’re looking at all the options and laying our cards on the table.”

Mardorf said an estimated 50 burials are affected with the potential for that number to increase to another 30.

“If we’re looking at the bigger footprint of the project, we may disinter up to 80, but that’s going to remain a flexible number as we get in there and see what burials were impacted,” she said.

And while there are some marked graves in the affected area, a lot of the graves are unmarked — some of those unknown graves hold the remains of U.S. Colored Troops; black soldiers who fought for the Union.

“We’re doing some genealogy research to reach out to any living descendants of those folks,” Mardorf said. “We have also reached out to several veterans organizations and sanitary organizations to talk with them about the project and consult with them. We’re engaging a number of stakeholders in the process.

“Our intent is to put everyone back into the same spot where they came. If we find any other objects or items that were buried with the people all those objects will be packaged and put with the remains.”

She added the remains and any other items found with them will go back into that same location after the stabilization has been completed.

Once the work begins on the graves, she said, there will be a team of archeologists and forensic scientists working together and the remains will be kept in an undisclosed secure area in the park.

“Our goal is to start the first step sometime after the start of the year,” Mardorf said. “What I understand is that the process of disinterring of people will take 3 to 6 months and then we’ll be able to start the stabilization. We’re still working through the compliance process and financial.”

Presently, she said, the slide area is blocked off and park officials are asking the public to stay away from the damaged area.

“We’ll have that framework, we’ll know what we need to build upon but that study is going to take another 12 months.”