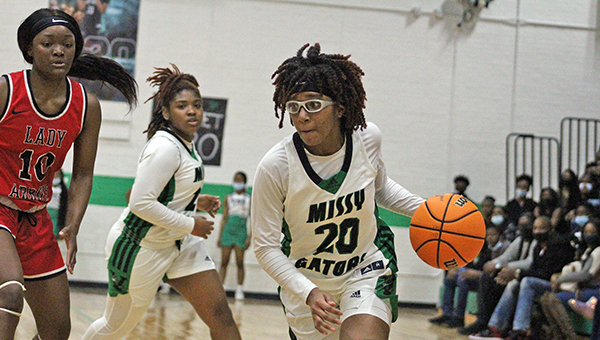 Vicksburg High girls basketball coach Troy Stewart says his team’s success is based off of excelling on defense, getting easy shots and making free throws.

Struggling in two of those areas, then, was not a pathway to victory against a quality opponent.

The Missy Gators fell behind early and hindered their ability to catch up by going 8-for-26 from the free throw line as they lost 69-62 to Clinton in their regular-season finale Tuesday.

“We live by three tenets — solid defense, make layups, make free throws,” Stewart said. “We didn’t play solid defense the first half. Our rotations were out of whack. We didn’t get back on a few occasions. Clinton makes their living beating you back and we knew that, so we tried to get back faster. It didn’t work. And then we just blew too many free throws.”

Layla Carter led four Vicksburg players in double figues with 20 points, including 10 in the fourth quarter. Ja’Na Colenburg made three 3-pointers and finished with 14 points, while Janiah Caples and Destini Sims scored 11 apiece.

The Missy Gators fell behind by as many as 13 points in the first half, however, and never could get the traction they needed to mount a comeback until it was too late.

They went on a 7-0 run in the last two minutes to cut a 14-point deficit to 67-60 on a rebound basket by Colenburg with 24.4 seconds to go. After two free throws by Durrell two seconds later, Carter hit a shot with 11.8 seconds left to make it 69-62 and then the Missy Gators simply ran out of time.

The loss was Vicksburg’s first in an actual game in 2022. It has taken four forfeit losses because of COVID-19 issues, but had not been defeated on the court.

As a measuring stick heading into next week’s Region 4-5A tournament, Stewart said facing Clinton was a good — if frustrating — test against a good team.

The Missy Gators (18-7-1) will play Callaway in the first round of the region tournament Feb. 8 at 6 p.m., at Jim Hill High School in Jackson.

“Losing to them doesn’t sting the same way it would losing to somebody else,” Stewart said. “I thought we showed gumption and heart toward the end. It’s just the ramp up for playoffs, so it may be the best thing that could have happened to us. We hadn’t lost in ‘22.”

Warren Central and Northwest Rankin will play again Monday at 6 p.m. in the Region 6-6A tournament at Terry High School.