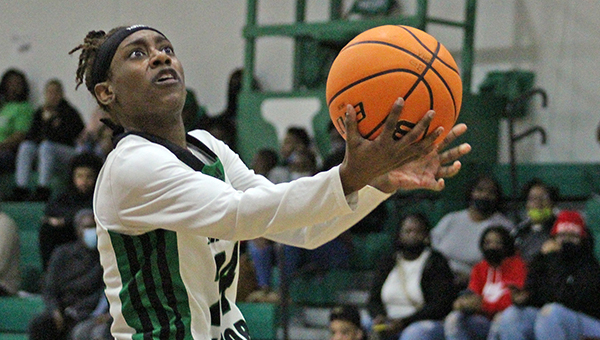 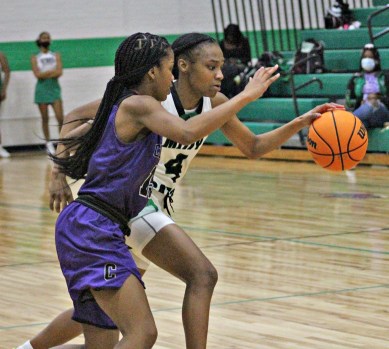 Vicksburg's Rodrianna Hall (4) tries to get past a defender during an MHSAA Class 5A playoff game against Cleveland Central. (Ernest Bowker/The Vicksburg Post) 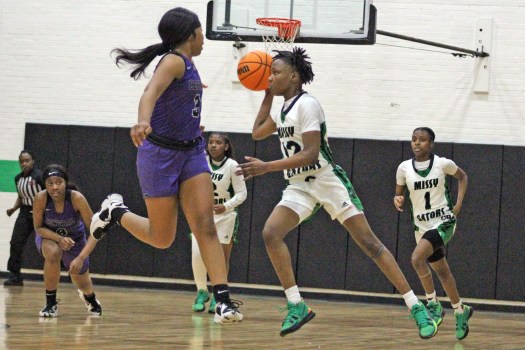 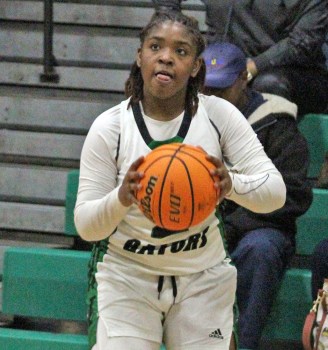 The Vicksburg Missy Gators dominated the first 11 minutes of Friday’s playoff game against Cleveland Central and built what seemed to be an insurmountable lead.

It turned out they needed every bit of it — and then some — to live to see another day.

The Missy Gators let all of a 22-point lead slip away before hitting just enough free throws down the stretch to hold off Cleveland Central and win 59-57 in the second round of the MHSAA Class 5A girls basketball playoffs.

“It’s a win. And then you had to gut it out and grind it. It’s another learning lesson,” Vicksburg coach Troy Stewart said. “We’ve just got to find that stride. I know we can play the way we played for those first six or seven minutes. If we can sustain that for 12 or 15 minutes it’ll be a good game whoever we play.”

The Missy Gators (21-7) advanced to the third round of the state tournament for the second time in three seasons. Waiting for them — again — is undefeated Neshoba Central (30-0), which beat Lake Cormorant 102-66 in another second-round game on Friday.

It’s the third year in a row and fourth time in five seasons that Vicksburg and Neshoba Central have played each other in the state tournament. Vicksburg won in 2020, and Neshoba in 2018 and 2021.

The Missy Gators and Lady Rockets will play Friday, Feb. 25, at 7 p.m. at Vicksburg High.

“They’re 30-0 for a reason. They can play really well,” Stewart said. “It’s our common nemesis. We have them every year. We’ve only won one, they’ve won two, so we’re going to do everything we can this week to get prepared for them and see how things shake out.”

The Missy Gators have a week between games, and might need to take most of it to iron out some kinks. They thoroughly dominated the early going against Cleveland Central, scoring the first 10 points of the game and rushing out to a 28-6 lead with 5 minutes left in the second quarter.

Stewart took the opportunity to slot in some subs, and at the same time Cleveland Central found its footing. The Wolves trimmed the deficit to 14 points by halftime and seven at the end of the third quarter. Even when Vicksburg’s starting lineup returned to the game their shooting was ice cold.

After scoring 28 points in the first 11 minutes, the Missy Gators scored 31 in the last 21 minutes.

“I put it more on us than anything else,” Stewart said.” We blew too many opportunities. We had wide open shots, too many turnovers when we were trying to force them to play man — we’ve got to stop turning that ball over in those situations. We made a few bad decisions. It was our fault more than anything else.”

Cleveland Central, meanwhile, kept on coming. They tied it at 55 with 1:33 remaining after McKenzie Jones made a basket, then got a steal and split a pair of free throws.

The Wolves, though, never got the lead.

Janiah Caples sank two free throws seven seconds later to put Vicksburg back in front, and another with 1:11 left to make it 58-57. Cleveland’s Sharia Davis hit two free throws and Vicksburg’s Layla Carter one to leave the score at 59-57 with 34.7 seconds to go.

Cleveland Central had a chance to tie, but Kristi Zollicoffer missed a jumper in the lane with 10 seconds left. Carter grabbed the rebounds and the Missy Gators were able to run out the clock.

Vicksburg scored its last 10 points at the free throw line and was 11-for-16 overall in the fourth quarter. Its last field goal in the game was a short shot by Destini Sims with 5:18 left.

Sims finished with 13 points, Colenburg had 15, Carter had 11 and Caples nine.

“It was a sealed game through free throws. I thought we did really well in the fourth (quarter) on free throws. That’s the best fourth-quarter free throw showing we’ve had this year,” Stewart said. “We’ve got some game closers, so I’m not concerned about those fourth quarter free throws when it matters, because I trust them.”