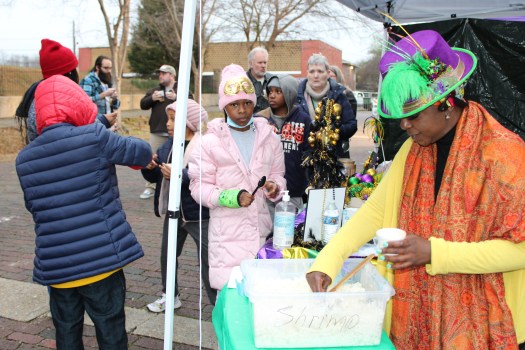 Karen Flaggs spoons rice into a cup as she serves another visitor to the Cajun Cuties booth at the Gumbo Cook-off Saturday by the Southern Cultural Heritage Center. Flaggs teamed up with Yvain Bryant from Houma, La., for the cook-off. (Photo by John Surratt | The Vicksburg Post) 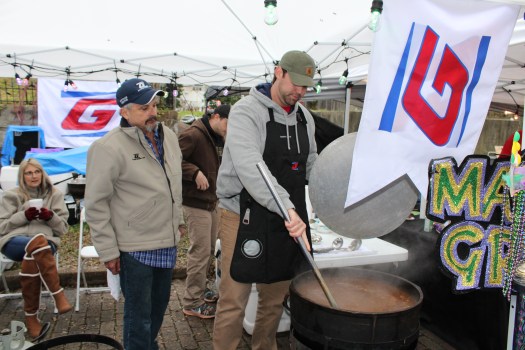 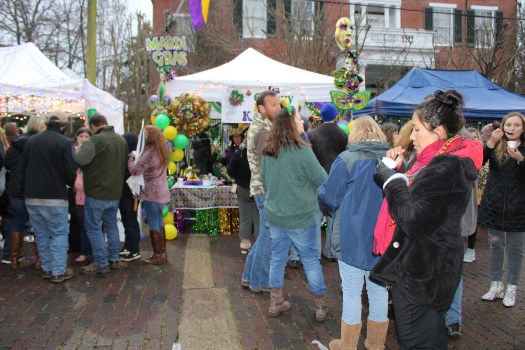 People line up for a taste of gumbo at the Groovy Roux Krew booth. (Photo by John Surratt | The Vicksburg Post) 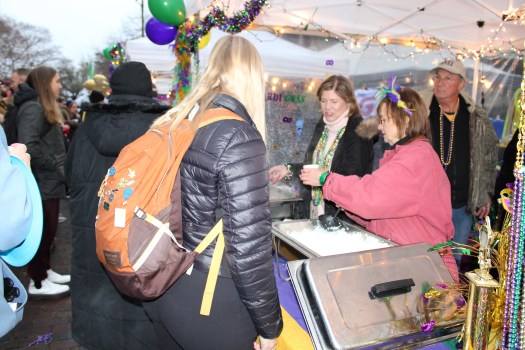 “We wanted to get involved in the cook-off,” Stubbs said. “We’ve done floats for the Mardi Gras parade for years. This year, we wanted to step up and cook gumbo.”

And he had a chief cook with a bit of a background; Capt. Marty Rinehart, a pilot for Golding and a Plaquemine, La., resident. Stubbs said events like the Mardi Gras parade and cook-off help bring company employees together “to have a good time and do something for the community.”

Golding Barge Lines was one of 10 organizations competing for the distinction of having the best gumbo in the city, and an estimated 800 people ignored the cold and misting rain to pack a section of Crawford Street between Adams and Cherry streets and sample the results of the cooks’ work.

Nancy Bell, executive director of the Vicksburg Foundation for Historic Preservation, estimated the cook-off, which was canceled in 2021 because of COVID-19, raised about $10,000.

“That’s not as much as the last time, but it rained,” she said. “I think the weather deterred a lot of people, but we’re so glad to be back and I think that’s what matters. Everybody had a great time and the teams produced some unbelievable gumbo. I think if it hadn’t rained we’d have done better.”

The wet weather marked only the second time the cook-off got wet.

“About four, five years ago, we knew it was going to pour down rain and we moved everything into the courtyard (of the Southern Cultural Heritage Center) underneath the awnings and put up tarps and moved everything inside,” Bell said. “We’ve had good weather for the others; it’s been cold but not rainy. We’ve always been blessed with good weather except for that one time.”

The weather didn’t deter the cooks, who kept the burners going, the gumbo hot and ladled out copious amounts of either chicken and sausage or a seafood gumbo to people who stood in the cold mist talking with friends as they waited to get their sample cups filled.

Gumbo also went to a team of judges: Sally Bullard, Chris Fink, Eric Richards and Catherine Hadaway, who had the task of sampling each entry and determining the best recipes.

Back outside, the team members in the booths kept the gumbo flowing.

“We’re just continuing a Mahoney family tradition,” Colleen Wells said as she dished out seafood gumbo to a steady stream of people at the Roux Krewe’s booth.

She pointed to a man in a family photo. “That’s my brother Jack; he started the Mahoney tradition.”

At the Krewe de Chaos, Paul Brasfield was checking the pot.

Over at Cajun Cuties, cook Yvain Bryant from Houma, La., and Karen Flaggs were serving gumbo with a zydeco beat as Bryant filled cups of rice with gumbo as fast as Flaggs could hand them to her.

“This is our first time,” Flaggs said, adding the process was hard work, “but fun.”

• People’s Choice: Rouxlin on the River.