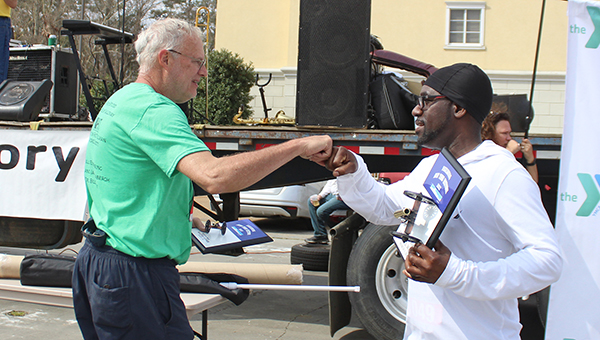 Steve Pranger, left, and Larry Robinson give each other a fist bump during the Run Thru History awards ceremony on Saturday. Robinson was awarded the men's championship after Pranger vacated it. (Ernest Bowker/The Vicksburg Post) 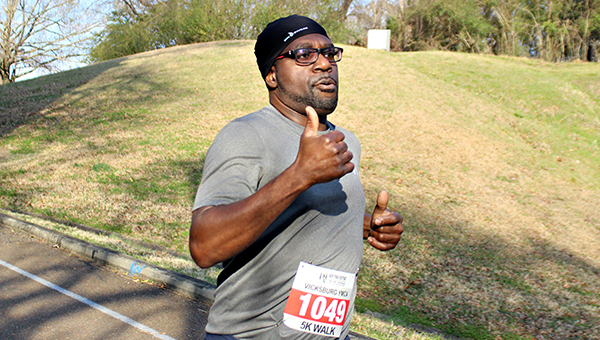 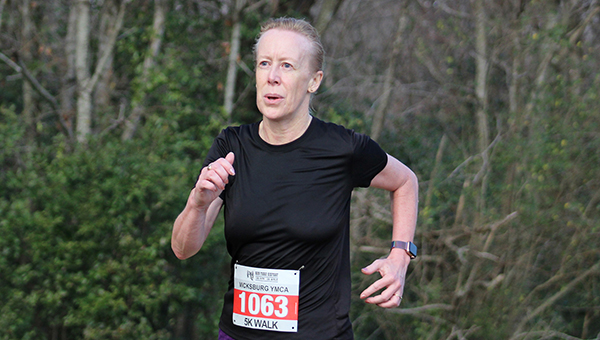 Col. Teresa Schlosser heads for the finish line at the Run Thru History 5K race walk on Saturday. Schlosser won the women's championship with a time of 32:45. (Ernest Bowker/The Vicksburg Post) 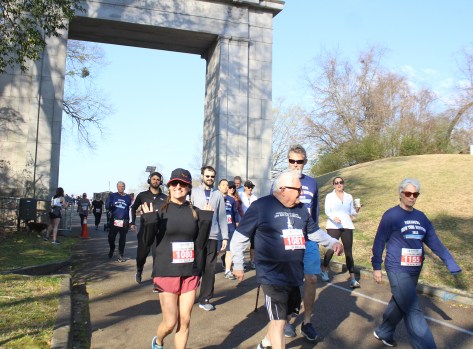 Walkers pass through the Memorial Arch in the Vicksburg National Military Park during the 43rd annual Run Thru History. (Ernest Bowker/The Vicksburg Post) 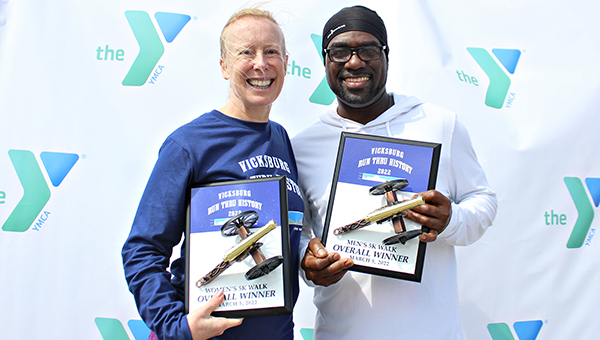 Two roads diverged in the Vicksburg National Military Park. Larry Robinson took the one less traveled. And that made all the difference.

It also made for a bit of a problem.

Robinson was leading the Run Thru History’s 5K race walk by a large margin when he missed a checkpoint and veered off course. He finished well back in the pack, far behind women’s winner Col. Teresa Schlosser and men’s winner Steve Pranger.

Pranger, however, voluntarily gave up his trophy to Robinson and the latter was named the Run Thru History winner for the seventh time in one of the strangest results in the race’s 43-year history.

“We screwed up, but Steve made it right,” Run Thru History race director Phillip Doiron said. “Normally you can’t do anything about it. You can’t ask the guy who won to give it up because the other guy would have (won). (Pranger) volunteered to do that. He’s the one that made it right.”

Robinson’s off-course adventure started when he pulled away from the pack about a third of the way through the race. A volunteer was supposed to be at a key checkpoint to direct runners and walkers where the road in the Vicksburg National Military Park forks, but was late in arriving and Robinson beat her there.

With no one to point Robinson in the right direction, the Forest resident went right when he should have gone left and followed a portion of the course designated for the 10K run. The race walk is only half that distance.

“He was so far out in front we didn’t know where he was at. He was in another county,” said Schlosser, who won the women’s title with a time of 32:45. “I was just excited to think I was going to come in No. 2 to Larry. He would have won it.”

Instead, Robinson did a lap around one of the VNMP’s hills before it looped back and he realized the mistake he’d made.

Schlosser was the first person to cross the finish line, just 15 seconds and a couple hundred feet ahead of Pranger. She won the women’s championship in her first Run Thru History.

“There were a couple of ladies that I thought were going to be faster than me, but I said I’m just going to walk my walk,” Schlosser said. “I started on the downhill and felt great. I caught Steve at about the mile-and-a-half marker and left him at the 2-mile marker. I just felt really good today.”

Pranger had his first men’s championship since 2018 — Robinson had won the last three years — but didn’t want to keep what he felt was a tainted victory. Once it became clear what had happened, he approached Doiron and asked that the title be given to Robinson.

Robinson, Pranger said, was so far ahead of the field that there was no doubt who would have won the race if not for the mishap at the checkpoint. Since the wrong turn stemmed from a mistake in race operations rather than Robinson’s own, Doiron agreed with the decision.

Robinson was credited with a winning time of 31:14, although his actual time was well over 40 minutes.

“You could say that it was sportsmanship, but it’s just reality,” Pranger said. “He didn’t realize and there wasn’t someone there to direct him and he went the wrong way.”

It was the first time since 2000 that a Run Thru History winner has had their result changed. That year, men’s walk winner Mike Renfroe was disqualified for using incorrect form — he lifted his foot like a runner — and the trophy was awarded to runner-up Charlie Montague.

This time, the winner willingly surrendered his victory.

Robinson was satisfied with the final resolution, but frustrated that it had to come to that.

“It would have been more satisfying if it was done the right way,” Robinson said. “I appreciate what Steve did. But I just wish somebody was there.”

Robinson also kept a sense of humor about the entire incident.

“I know one thing. Doing that extra time is going to make me sleep good today,” he joked.