Southern Miss runs out of gas in C-USA Tournament 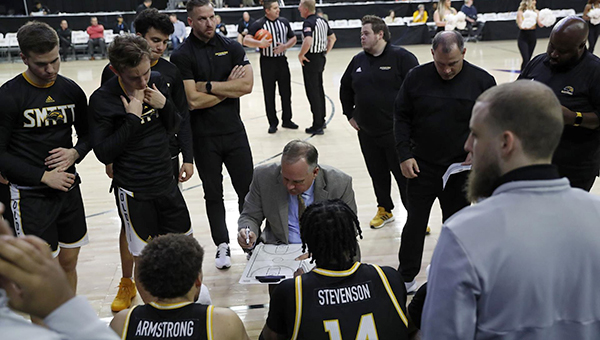 FRISCO, Texas — One upset was all Southern Miss had in the tank at the Conference USA men’s basketball tournament.

Five Florida Atlantic players scored in double figures, and the Owls pulled away in the second half to beat Southern Miss 86-59 in the second round of the C-USA Tournament on Wednesday.

Southern Miss (7-26) snapped a 14-game losing streak by beating UTSA in the first round on Tuesday, and only trailed by six at halftime against Florida Atlantic.

Southern Miss went nearly eight minutes without a field goal, and five minutes without scoring at all. Tyler Stevenson hit a jumper with 10:38 left to finally end both droughts, but Florida Atlantic led 61-36 at that point.

“In a tournament setting like this, typically the team that played the day before has a slight advantage the next day, especially in the first half,” FAU coach Dusty May said. “For us to have a lead and not feel like we played anywhere near our full potential, we felt like we could make a run in the second half. I thought our guys were phenomenal in the second half, on both sides of the ball.”

Bryan Greenlee led Florida Atlantic (19-13) with 15 points on 5-of-6 shooting from 3-point range, and had six assists.

Goldin added 12 points for the Owls. Giancarlo Rosado had 11 points, while Brandon Weatherspoon and Alijah Martin both scored 10.

Florida Atlantic advanced to play UAB in the quarterfinals Thursday at 8:30 p.m.