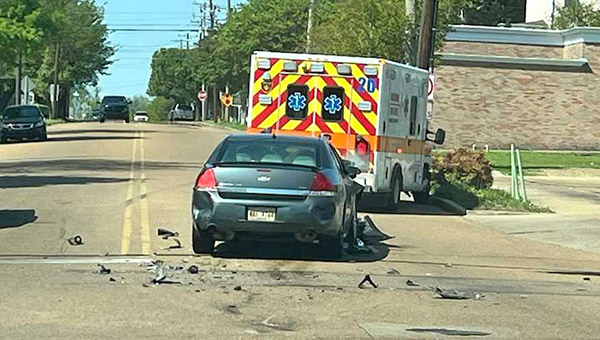 A dark gray Chevrolet Malibu sedan struck a Vicksburg Fire Department ambulance on Tuesday afternoon at the intersection of Clay and Cherry streets. (Photo by Anna Guizerix | The Vicksburg Post) 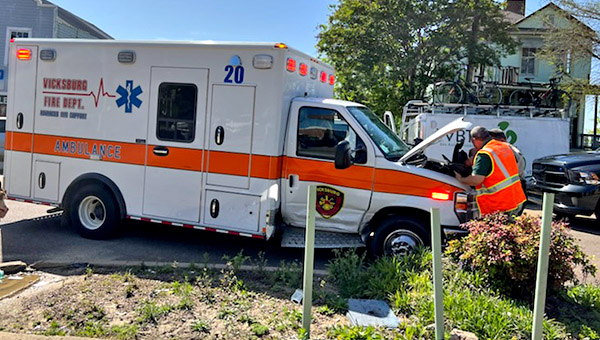 Paramedics work to disable the alarm on a Vicksburg Fire Department ambulance Tuesday after the ambulance was involved in a collision with a passing vehicle. (Photo by Anna Guizerix | The Vicksburg Post) 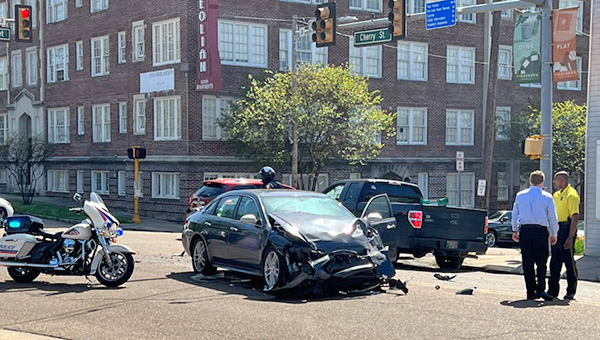 A Chevrolet Malibu was damaged on Tuesday when it hit a Vicksburg Fire Department ambulance at the intersection of Clay and Cherry streets. (Photo by Anna Guizerix | The Vicksburg Post)

A Vicksburg Fire Department ambulance was hit by a car as both vehicles passed through the intersection of Clay and Cherry Streets at approximately 3:20 p.m. on Tuesday.

The ambulance, which had its lights and siren activated, was heading north on Cherry Street to respond to a call. The ambulance bypassed stopped traffic in the northbound lane and turn lane of Cherry Street and was struck as it traveled across Clay Street.

The car that hit the ambulance was a dark gray Chevrolet Malibu, which was traveling west on Clay Street, in the direction of Downtown Vicksburg. Airbags were deployed, but the vehicle’s occupant, a female, sustained only minor injuries.

Warren County Sheriff Martin Pace was traveling south down Cherry Street in his patrol vehicle and was the first law enforcement officer on the scene. Pace was followed shortly by Vicksburg Police Department personnel, Vicksburg Fire Chief Craig Danczyk and an additional ambulance to attend to the driver of the car and the two paramedics who were riding in the ambulance at the time of the accident.

Deputy Vicksburg Police Chief Troy Kimble was on the scene and assisted in conducting an analysis of the wreck, at one point noting debris from the car was strewn approximately 25 feet from its final resting point.

“The paramedics are checking out everyone to make sure they’re okay, and then the safety director is going to do his thing and we’re going to assist them,” Kimble said. “Once we have the assessment of the occupants of the vehicles complete, hopefully, it’ll be about 30 minutes when the intersection is reopened.”