LOOKING BACK: A South Street home from days gone by 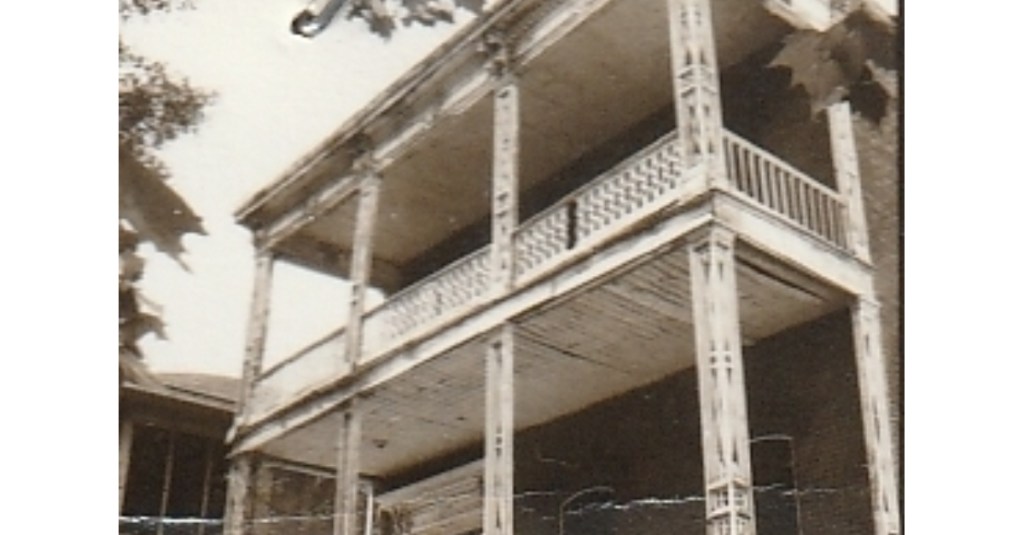 Last week, we featured the first in a row of two-story residences on South Street between Adams and Locust streets.

This house is the second house from the left and was a two-story brick three-bay Italianate townhouse with its porch supported with Vicksburg pierced columns. It was most probably built in 1877 by R.F. Beck, who had completed his residence on the same street in 1875.

He advertised the house for sale in September 1877 in the Vicksburg Herald, stating that it had seven rooms, a kitchen, servant’s quarters, bath and storerooms. The Herald then reported that Dr. Quinn had moved into the house in October 1877.

An article in the Vicksburg Herald on May 27, 1879, reported that “the residence of Dr. R.A. Quinn was burglariously (sic) entered Sunday night and the clothing worn by the Doctor the day before carried off, together with various articles of jewelry. The burglar effected (sic) an entrance by climbing the balustrade and prying open a window that led into the sleeping apartment.

“No arrest has been made, but as the articles stolen are all easily identified, there is scarcely a doubt that the thief will be overtaken and the stolen property recovered.”

According to the Vicksburg Herald, “he entered the Confederate Army as a member of the Volunteer Southrons and was attached to that command, a part of the 21st Mississippi Regiment, Humphreys’ Brigade, until appointed to the staff of his distinguished commander as ordinance officer, which position he filled with that personal credit and high efficiency which sigualized (sic) his entire military career. Upon returning to the city he resumed commercial pursuits and was a partner at different times in various well-known business houses.

Cramer died on Aug. 17, 1894, and was buried from this residence. The front room of this house was rented out for many years with advertisements extolling that the fully furnished room had privileges of the bathroom with hot and cold water.

In 1904, Emma Shearer Rector lived in the house and died, her funeral also from the house. In March 1906, Holy Trinity Church bought the house and it became the rectory for the Rev. J.R. and Harriet Carter. In 1911, the house was rented to W. Magruder Drake, a manager of W.C. Craig and Company.

In 1918, James and Emily Shaw rented the house and by 1919, the church was advertising it again for rent.

In 1924, James and Stella Aicklen and James’ mother, Mary, lived in the house with children Hugh and Frank. James was a bookkeeper at the Vicksburg Ice Company. James was still a resident of the house when he died in 1955, as was Stella when she died in 1956. In 1959, it was the home of William and Hattie McKenzie.

The house continued to be alternatively vacant and rented over the next 20 years and was then torn down.