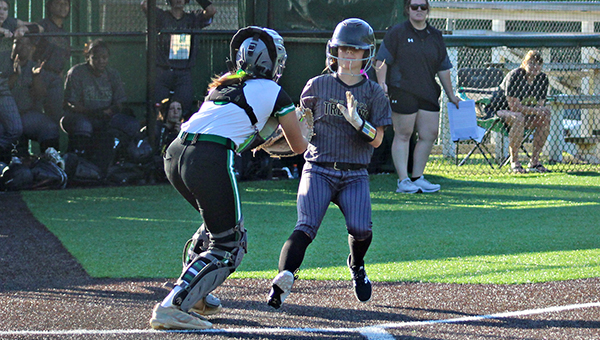 The Vicksburg Missy Gators wanted Friday’s game more than any they’d played all year — and that might have been their biggest problem.

New Hope rode a fast start and a dominating pitching performance by Adi Duett to a 6-0 win over the Missy Gators in Game 1 of their MHSAA Class 5A playoff series at the Softball Swamp.

New Hope scored five of its six runs in the first two innings and Duett took it from there, racking up 10 strikeouts in a three-hit shutout.

“I think we were just so nervous and tight in the first couple of innings because last year we got screwed out of a win,” Vicksburg infielder Lexi Kistler said, referring to last season’s controversial playoff loss to New Hope. “We’re back again, we had a big crowd, and we wanted to impress everybody. I think we got a little too nervous. But we loosened up. We’re going to go back there and do just like we did (in 2021).”

Game 2 of the best-of-three series is Saturday at 4 p.m. at New Hope. Vicksburg (11-14) needs to win it to force a deciding Game 3 Monday night back on its home field.

One bit of consolation for the Missy Gators is that they’ve been down this road before. They lost Game 1 of a second-round series vs. New Hope last year and then bounced back to win Games 2 and 3.

New Hope, however, appealed its Game 3 loss to the MHSAA when it alleged that an illegal ball was used. The appeal was upheld, the MHSAA ordered Game 3 to be replayed in its entirety, and New Hope won the do-over and the series.

“There’s no doubt in my mind that we can beat this team. If we go up there with the right mindset and stay loose in our own head, and not guess and just go up there and play the game and react to the ball, then we’ll be fine,” Vicksburg coach Brian Ellis said. “Win or lose, we’re going to play hard. Hopefully we can go up there and win a ballgame and be back here on Monday night.”

Avenging last year’s bitter ending was foremost on the Missy Gators’ mind heading into this weekend. Unfortunately, they weren’t able to fully harness that emotion in Game 1.

New Hope scored two runs in the first inning and three in the second to jump out to a big lead. Most of the Lady Trojans’ 10 hits in the first two innings were lightly-hit balls that seemed just out of reach of Vicksburg’s fielders.

One of the few that was smashed, a two-run double off the center field wall by Zoe Goodman that made it 5-0, came on a pitch delivered with two outs and two strikes.

“We weren’t ourselves. It wasn’t that we were too relaxed. We were too tight and we were trying to fight it the whole time,” Ellis said. “But on the flip side of that, I don’t know how many games we’ve allowed a run in the first inning or two. It was more the errors and they hit the ball.”

Vicksburg settled down defensively after its rough start. New Hope only scored once in the last five innings. The Missy Gators never got their bats on track against Duett, though.

The right-hander retired the first nine batters she faced, and 19 of the first 21. Amari Johnson led off the fourth inning with a single and hit a two-out double in the sixth to account for Vicksburg’s only baserunners through six innings.

Vicksburg did put two runners on in the seventh, on an error and a double by Trinity McGloster, but both wound up stranded in scoring position.

The Missy Gators only hit three groundballs the entire game. Twenty of their 21 outs were recorded on either strikeouts, pop-outs or flyouts.

“That was a lot of where we got to chasing and we were guessing on our swings,” Ellis said. “We know we can hit the ball. They’ve just got to go up there and see the ball over the middle of the plate and hit it.”

The Missy Gators will face a do-or-die situation on Saturday, but the other bright spot of Friday’s loss was that there were several clear deficiencies they could point out that caused it. Correcting those, they said, should make for a better outcome.