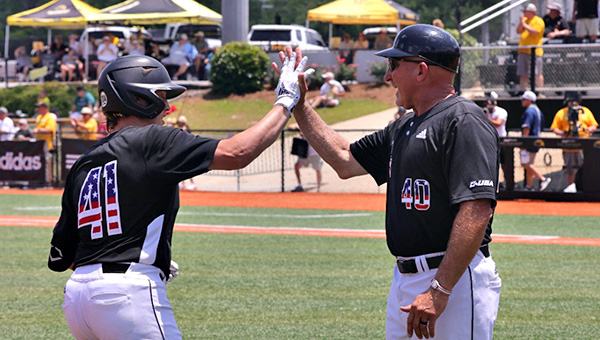 Southern Miss' Christopher Sargent (41) gets a high five from head coach Scott Berry his third home run of the game in a 9-5 win over UTSA on Sunday. (Joe Harper/BigGold Photography/Southern Miss Athletics)

Christopher Sargent tied a school record by belting three home runs, and Southern Miss hit six in all as it beat UTSA 9-5 in their series finale at Pete Taylor Park.

Southern Miss (38-14, 20-7 Conference USA) closed in on the C-USA regular-season championship by winning the series against UTSA (33-18, 17-10). The Golden Eagles finish the regular season with a three-game road series at Middle Tennessee beginning Thursday, and have a two-game lead on Louisiana Tech (36-17, 18-9).

Southern Miss had entered this weekend with back-to-back series losses, and dropped the opener vs. UTSA before righting the ship on Saturday and Sunday. The Golden Eagles scored a total of 17 runs in winning the last two games, and the finale turned into a home run derby.

In the fourth inning, Reece Ewing hit a long two-run home run over the right field wall to make it 7-5 and put the Golden Eagles ahead for good.

Paetow homered in all three games of the series and has 12 for the season. Sargent’s big day gave him a team-leading 18 home runs.

Justin Storm (2-0), the third of five USM pitchers, recorded the victory by fanning two over 1 2/3 innings and getting a big double play to get out of a jame.

Landon Harper entered in the eighth with two runners on after Garrett Ramsey was hit in the leg with a batted ball and had to leave the game.

Harper got consecutive strikeouts and a flyout to end the threat and then retired the Roadrunners in order in the ninth to earn his 10th save. He is the first Golden Eagle to register 10 or more saves in a season since Nick Sandlin collected 12 in 2016.

Ole Miss won its seventh consecutive game and clinched a berth in the SEC Tournament, just a couple of weeks after it looked like it might be on the bubble. The Rebels also got their first-ever three-game series sweep in Baton Rouge and first of any kind since taking both ends of a two-game series in 1969.

The homers by Alderman and Chatagnier snapped a 3-all tie and put the Rebels ahead for good. Alderman’s blast was preceded by a leadoff single from Tim Elko, and Chatagnier’s by a two-out walk to Leatherwood.

Chatagnier finished 3-for-5 with two RBIs and two runs scored.

Ole Miss relievers Jack Washburn, John Gaddis and Brandon Johnson combined to allowe one run in 4 2/3 innings. Gaddis (3-1) pitched two innings and earned the win, while Johnson went the last 1 1/3 for his ninth save of the season. Johnson had four strikeouts.

Ole Miss will play a midweek game Tuesday at Arkansas State, and then hosts Texas A&M in a three-game series beginning Thursday to close out the regular season.

Luke Hancock got another RBI single in the seventh for Mississippi State, but Bost’s double in the eighth sealed it.

Mississippi State lost its third consecutive SEC series, and ninth game in a row overall. It finishes the regular season with a midweek game vs. North Alabama on Tuesday, and a three-game series at home against No. 1 Tennessee beginning Thursday.

The Bulldogs will need to win the series against Tennessee, and most likely sweep it, to secure a spot in the SEC Tournament.