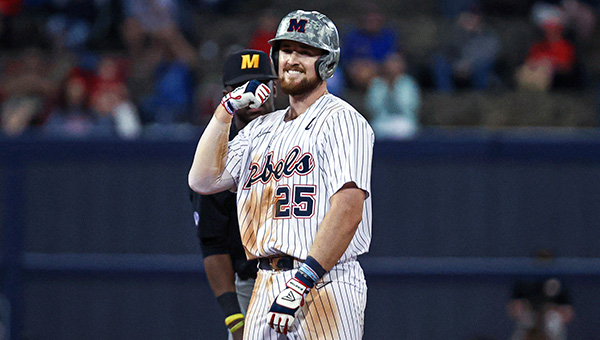 Ole Miss' Tim Elko (25) is one of five finalists for the C Spire Ferriss Trophy, given annaully to the top college baseball player in Mississippi. Elko ranks second in the Southern Conference with 19 home runs and 60 RBIs. (Kiana Dale/Ole Miss Athletics)

Elko and Hall will be joined by Mississippi State infielder R.J. Yeager, Delta State pitcher Harrison Haley and Belhaven pitcher Brett Sanchez at the awards ceremony next Monday at the Mississippi Sports Hall of Fame and Muesum.

Elko ranks second in the Southeastern Conference with 19 home runs and 60 RBIs. Yeager is in the top five in both categories with 17 homers and 52 RBIs.

Hall has a 7-2 record and a 2.60 ERA in 14 appearances this season. He has posted 10-plus strikeouts in five outings and was named the Conference USA Pitcher of the Week twice.

Haley, a sophomore, is 10-1 with a 3.84 ERA. He has 58 strikeouts and 15 walks in 91 1/3 innings pitched, and his 10 wins lead the Gulf South Conference. Delta State (32-15) will begin the NCAA Division II Tournament Thursday against Rollins College, in the South Regional.

Sanchez is Belhaven’s fourth Ferriss Tropghy finalist and the first since 2014. He led the Blazers with an 8-1 record in 11 games, threw four complete games and one shutout, and posted a 0.91 WHIP.

The Ferriss Trophy presentation will be Monday, May 23, at 11:30 a.m. at the Mississippi Sports Hall of Fame and Muesum in Jackson. Former Mississippi State coach Ron Polk will be the featured speaker and each respective coach will talk about their players.

Individual tickets for the luncheon are $40, and a table of eight costs $350 with additional benefits. Tickets are available at the MSHOF website.