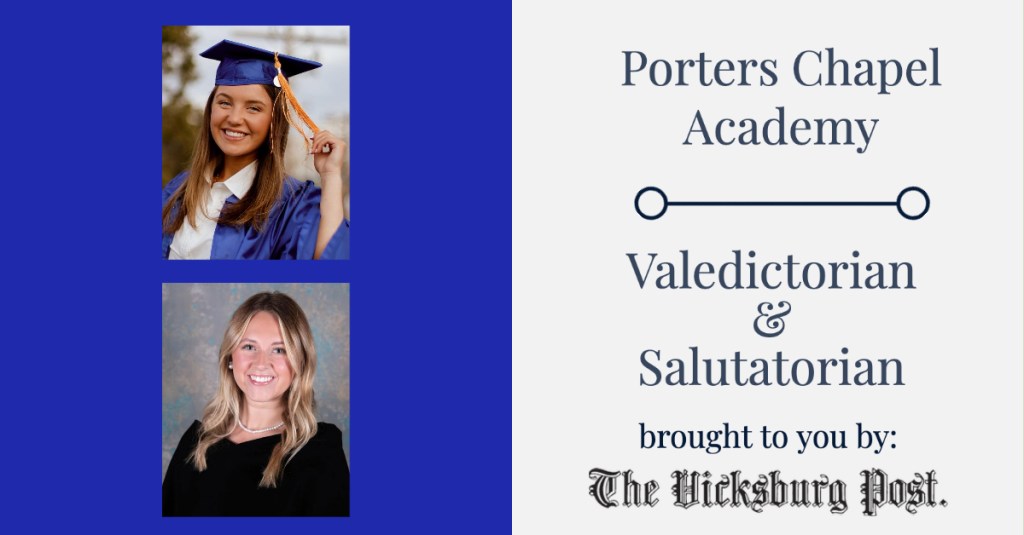 Masterson, who is the daughter of Dr. Calvin and Dana Masterson, said she was excited when she learned she had been named PCA’s 2022 graduating class valedictorian.

“The feeling was pure joy,” Masterson said. “It was something I have worked so hard for, and it has finally paid off.”

Masterson said it had always been her priority to be at the top of her class, and helping her reach the goal was her family and faculty at PCA.

“I would like to thank my parents and siblings for pushing me to always do well. I would also like to thank Mr. Williams, Mrs. McClain, Mr. Crabtree, Mrs. Baker and Mrs. Warren. They always wanted the very best for me and they always believed in me,” she said.

Masterson is graduating with a 4.5 GPA and was awarded a Red Carpet Bowl Scholarship and a Merit Scholarship from the University of Louisiana-Monroe.

While a student at PCA, she was a member of the National Honor Society, Phi Theta Kappa and Mu Alpha Theta. She was a cheerleader, a member of Key Club, and on the school’s softball, basketball and track teams. Masters was also a member of the Cotillion Club and SubDebs.

Masterson is set to attend the University of Louisiana-Monroe and major in pre-nursing with plans to become a nurse practitioner.

During her valedictorian speech, Masterson said, she will remind her class God is always present in their lives.

“And I will remind them to pursue Christ in whatever they plan to do after high school,” she said.

Macey Leanne Bufkin is the daughter of Mickey and Mary Bufkin.

In learning she had been named salutatorian of her graduating class, she said she was “excited.”

“My goal was to do the best that I could,” she said. “It was a close competition for salutatorian.”

Bufkin credited her mother as being her biggest supporter.

“My mom was a great support in helping me achieve my goals,” she said.

Bufkin, who graduated with a 4.41 GPA, said she plans to attend Hinds Community College and study nursing. She received two scholarships from HCC — one for having a 4.0 or above GPA and the other for being named salutatorian.

While a student at PCA, Bufkin was a member of Phi Theta Kappa, the National Honor Society, Mu Alpha Theta, Key Club and the Fellowship of Christian Athletes. She served on the student council, was a cheerleader and was a member of the softball, track and basketball teams. Bufkin was named a 2022 Delta Honor Graduate and was awarded PCA’s 2022 scholar-athlete of the year.

During her salutatorian speech, she said, she plans to tell her classmates, “We have faced many challenges, but we made it.”

Porter’s Chapel Academy will hold its graduation ceremony on Saturday, May 21, at 3 p.m. at First Baptist Church in Vicksburg.

RECOVERY AND RESTORATION: Belmont Gardens begins next chapter as…