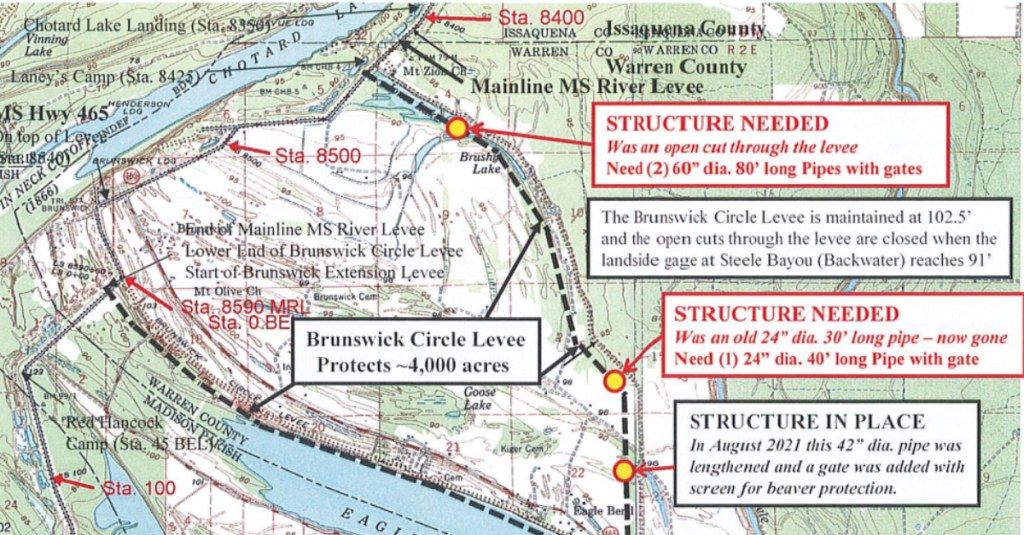 A map of the Brunswick Circle Levee, pictured with notes explaining existing structures and areas for improvement. (Map Courtesy of the Mississippi Levee Board)

A levee in the Yazoo Backwater area was a topic of discussion at Monday’s working session of the Warren County Board of Supervisors.

Eagle Lake resident and board member of the “Finish the Pumps” organization Ann Dahl addressed the board and detailed her concerns about the Brunswick Circle Levee, an earthen levee that, when closed, protects 230 homes and one church in the Eagle Lake area.

Dahl’s request on behalf of her neighbors was simple: Please move quickly.

“The circle encompasses about 4,000 acres and originally, it was built for farming,” Dahl said. “Now that the lake is better inhabited, it serves other purposes.”

In April, the Mississippi State Legislature approved $75,000 in state funds to be used to update and repair the levee, specifically to construct floodgates. Dahl, on behalf of the Finish the Pumps group, said she visited the board to impress upon them the seriousness of the situation.

Peter Nimrod, the engineer for the Mississippi Levee Board, said the levee structure dates back to the 1880s. As such, the open culverts in the levee structure don’t have modern gates to protect against floods. Instead, it’s up to the landowners to pack the openings with soil, to block out floodwaters. The levee sits on private land, but the funds were allocated due to the impact flooding has on the area beyond the private lands.

“What it does, is it sits along the southern edge of Eagle Lake, and then it peels away from Eagle Lake, back to the north and then goes west back to the main Mississippi River levee,” Nimrod said. “The little circle levee still has some function to it, especially during the Backwater Flood (of 2019). There are two culverts going through it, and also a cut through it, and all the water in that circle levee has to drain into Steele Bayou.”

Dahl elaborated that point to the supervisors, explaining the process and pitfalls as she had seen them.

“It has to be closed when (the water) reaches 91 feet. When it reaches 91 feet, the landowners get a call from Peter Nimrod,” Dahl said. “And by closed, it’s not a gate you open and close. It’s getting track hoes in there to try to find dirt to fill in these culverts.”

One culvert, which was updated in 2021, has grates and a 42-inch drainage pipe installed by landowner Merritt Aden and his associates.

“So, you can’t haul dirt in,” Dahl said. “When they open the cut, all the water just washes the dirt away. The last couple years, at both of the bad cuts, they are actually scraping dirt off of the levee itself, undermining the width of the levee and the height of the levee.

“I am asking you to utilize that $75,000 as soon as you physically get it in your hands. No additional scope, just as soon as it’s available to y’all, please get it done.”

Nimrod clarified that the $75,000 in state funds would be able to cover the full cost of the project, but said he was concerned about supply cost increases.

“We’d been talking about this for some time, and finally, after the massive backwater floods over the last couple years, people finally realized the real need for that circle levee,” Nimrod said. “Rep. Kevin Ford and state Sen. Briggs Hopson really stepped up, and said, ‘What can we do?’ and we said, ‘Well, we need some money.’

“It’s one of those things we’ve been talking about for 20 years, and we’re finally getting to the point where we can actually get it done,” Nimrod added, highlighting the good relationship between the state legislature and Warren County on this matter.

The board determined it would communicate with Nimrod and would further discuss the matter with his office, in terms of logistics for completing the project. Board President Kelle Barfield stated that the funds would be made available to the board by July 1.