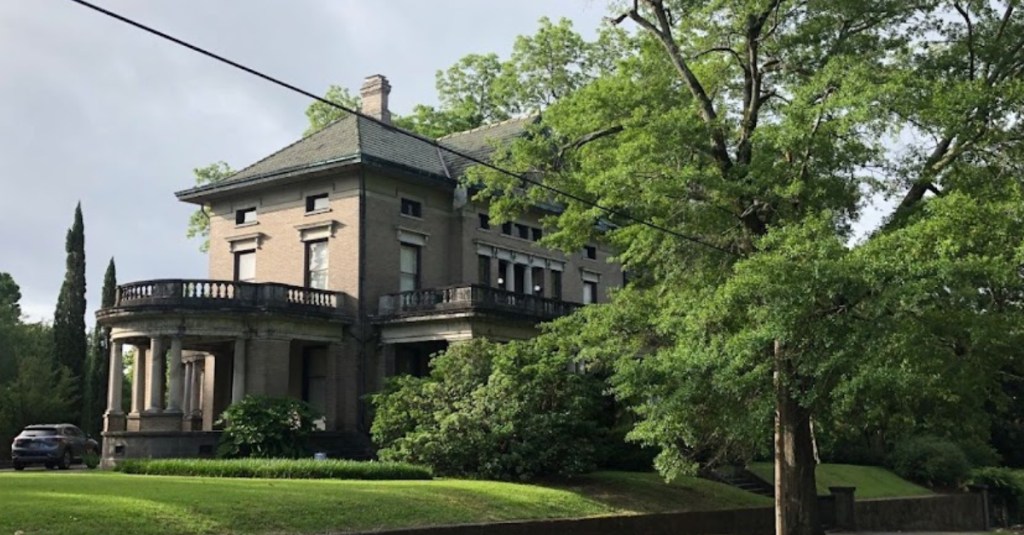 Edwin Jefferson and Mosella Bomer bought the lot on the corner of Cherry and Halls Ferry in July 1904.

They built the retaining wall that supports the property along with Halls Ferry and Speed Street from September to November 1908. The house was built in 1909, finishing up in November/December.

The Vicksburg Herald reported that W.H. Bruser was installing the plumbing and gas and that J.L. Motts was providing the Imperial porcelain plumbing fixtures.

The Bomers had two children: Cherry and Lottie. Bomer and his brother John were from Tennessee (John still lived there) and owned Bomer Brothers Lumber Company.

They were manufacturers and dealers in hardwood lumber. Edwin was active in the Board of Trade and Crawford Street U.M. Church and Mosella was a member of the board of directors of the Old Ladies Home. In 1915, the Bomer Brothers moved their operation to Blanks, La., but Mosella and the children stayed in Vicksburg and Edwin traveled back and forth when he could.

Cherry was married to Rundle Smith, an attorney, in 1917 and the couple made the house their home as well. In August 1919, the Vicksburg Evening Post reported that “Capt. W.T. Rigby chairman of the Park Commission is very much pleased with a gift of a bronze portrait tablet of Lieut. Col. Pembroke S. Senteny, which is to be presented to the park by Mr. E.J. Bomer, of this city.

Lieut. Col. Senteny was killed at the Third Louisiana Redan on July 1, 1863, when his regiment, the Second Mississippi, was in support of the Third Louisiana infantry, and it has long been the desire of Capt. Rigby to add his portrait to the others in the park. Mr. Bomer, taking a deep interest in the beauty of our fine showplace, generously offered to present the tablet, which will cost in the neighborhood of $270.”

Rundle Smith was a soldier in World War I and on returning to Vicksburg after the war was considered a “brilliant young attorney.”

He was very involved in the Kiwanis Club, holding various offices, including secretary. In 1922, he was one of fifty speakers (and one of two southerners) chosen to deliver an address at the International Kiwanis Convention in Toronto, Canada.

On Confederate Memorial Day in 1922, he delivered an address for the Allein Post of the American Legion in memory of World War I heroes. The Herald reported that Smith “delivered the address at the monument and paid an eloquent tribute to his comrades, those who made the supreme sacrifice, and those who were in jeopardy and who won the great world war for liberty and democracy.”

Cherry was involved in the American Legion Auxiliary as the corresponding secretary.

By 1924, only Cherry and Rundle Smith were listed as occupants in the home on Cherry Street and they were there as late as 1935. By 1950, the house was the home of Dr. and Mrs. Walter Johnston. The 1904 wall continues to support the house and grounds today, some 118 years later.