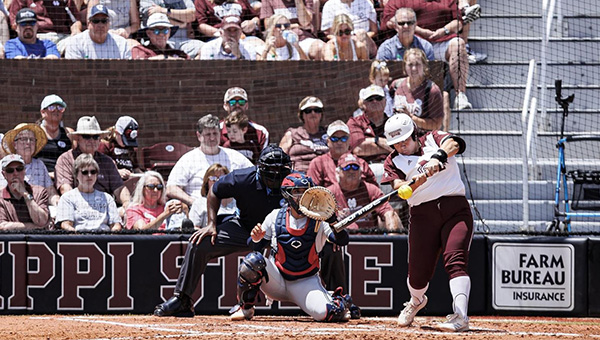 And then Arizona left them all reeling.

Sharlize Palacios hit a game-tying sacrifice fly in the seventh inning, Izzy Pacho hit a solo home run in the eighth, and Arizona rallied to beat Mississippi State 3-2 in Game 1 of their NCAA Tournament super regional series on Friday.

Game 2 of the best-of-three series is Saturday at 3 p.m. in Starkville. Mississippi State (37-26) needs to win to force Game 3 on Sunday, while Arizona (37-20) can advance to the Women’s College World Series with another victory. Game 2 will be televised on ESPNU.

“I think, for us, all year long it’s been about learning from each weekend and each game, and I think we have a great example of it from last weekend down in Tallahassee that we can now look back on and learn,” Mississippi State coach Samantha Ricketts said. “But at the same time, we talked about that was its own separate moment, and this weekend is a new moment. We can look back and learn but we need to refocus and be where our feet are in this moment.”

Arizona is playing in its eighth consecutive super regional.

Mississippi State is in the super regional round for the first time in the program’s history. A sellout crowd of 2,209 — the largest ever to watch a college softball game in the state of Mississippi — was on hand for Friday’s opener, and tickets for all three games of the super regional sold out within hours earlier this week.

“It was a dream come true, just knowing how many people we had behind us today,” Mississippi State catcher Mia Davidson said. “Having all of those people in the stands and the outfield is just something that a little girl dreams of. That pumped us up and gave us momentum. We had zero dull moments with our crowd. It was just one of those things that you love to see.”

Mississippi State gave its fans plenty to both cheer and groan about.

Mia Davidson and Matalasi Faapito hit solo home runs as the Bulldogs ran their team’s season home run total to a school-record 73. Faapito’s homer in the bottom of the sixth inning put the Bulldogs ahead 2-1.

Mississippi State left 11 runners on base, however, and the missed opportunities to add a run or two came back to haunt them in a close ballgame.

After Faapito’s home run gave MSU the lead, Arizona loaded the bases with one out in the top of seventh inning. Reliever Aspen Wesley got the last two outs without allowing a hit, but Palacios hit a deep fly ball to center field to bring in Giulia Koutsoyanopu with the tying run.

“We hit a lot of balls hard, but we just couldn’t get enough to fall that we needed to,” Ricketts said.

Arizona pitcher Hanah Bowen set MSU down in order in the seventh and worked around a leadoff walk in the eighth to finish a complete game. In between, Pacho hit a solo homer leading off the top of the eighth to provide the winning margin for the Wildcats.