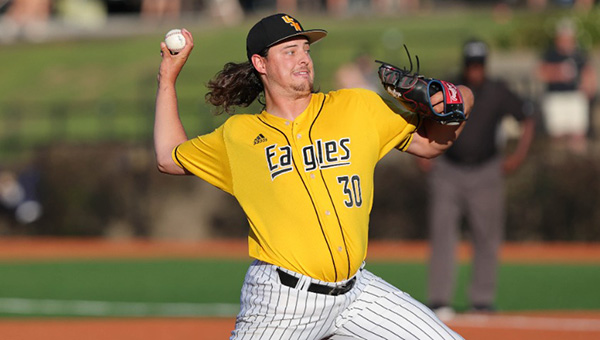 HATTIESBURG — Southern Miss has a long road ahead of it to win the Conference USA Tournament, but it’s still driving on it.

“Now our backs are against the wall, but we’re in this game and our guys responded,” Southern Miss coach Scott Berry said in a postgame television interview. “Of course tomorrow we have to play two games and win both of those games to make it to the championship. We’ll take them one game at a time. We’re trying to write a neat story right now. A tough one. We’ve made a tough road for us, but I think these guys are willing to get in there and grind it out.”

Riggins’ only real troubled came in the third inning when he walked the bases loaded. Dylan Goldstein then hit a deep fly ball to left field that USM’s Reece Ewing went over the fence to snag. The catch ended the inning with the game still scoreless.

Riggins retired nine batters in a row from the fifth through eighth innings.

“Both pitchers pitched outstanding. They gave their teams a chance to win,” Berry said. “Riggins struggled a little bit early, especially in the bases loaded situation. Ewing makes a great play against the left field wall to end that threat and it really gave us momentum and a big stop.”

FAU starter Jacob Josey matched Riggins pitch for pitch. Josey did not allow a run through six innings, and retired the first batter in the seventh before he finally cracked.

Danny Lynch hit a one-out double and Will McGillis was hit by a pitch. After a fly out, Rodrigo Montenegro lined a single to center field and Lynch scored from second with the game’s first run.

Josey walked Gabe Montenegro before exiting. His replacement, Robert Wegielnik, then walked Dustin Dickerson with the bases loaded to force in a run to make it 2-0.

Josey (4-5) wound up allowing two runs on five hits, while walking four and striking out two in 6 2/3 innings.

“For 6 1/2 innings there it was a lot of zeroes that went up. But our guys didn’t flinch,” Berry said.

Southern Miss broke the game open in the eighth. Three doubles, including run-scoring hits by Lynch and Carson Paetow, plated three runs to increase the lead to 5-0.

Rogers walked a batter in the ninth but never got into serious trouble as he earned his sixth save of the season. He had three strikeouts in 1 2/3 innings.

“Dalton, when he’s on he’s really good,” Berry said. “They have some left-handed hitters and he had to navigate through that lineup. Those lefties can really hurt you, but we felt that was the best matchup.”