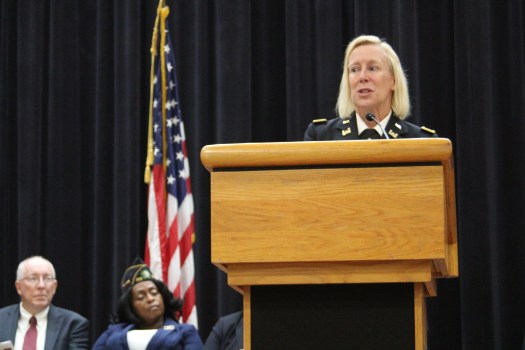 U.S. Army Engineer Research and Development Center commander Col.Teresa Schlosser talks about an experience in Iraq that taught her the true meaning of Memorial Day at the memorial service at the Vicksburg Auditorium. (Photo by John Surratt) 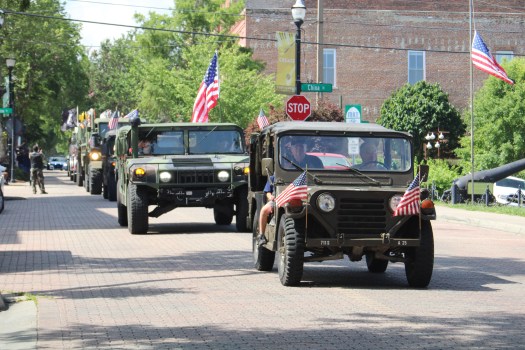 A vintage military jeep with its bumpers accented by American flags leads a group of military vehicles during Monday's Memorial Day parade. The parade opened Vicksburg's 43rd Memorial Day observance, which was held in person after being virtual for two years because of COVID-19. (Photo by John Surratt) 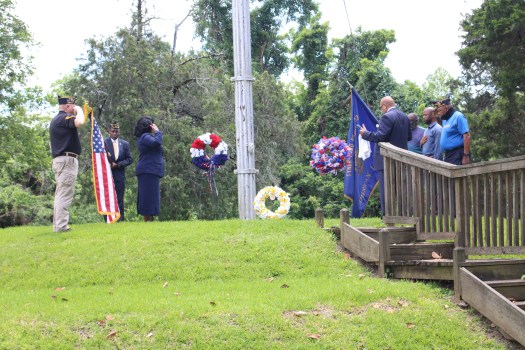 Members of Vicksburg American Legion Posts 3 and 213 salute as Taps are played at a wreath-laying ceremony at the National Cemetery at the Vicksburg National Military Park Monday. (Photo by John Surratt)

“So we’re doing a relief-in-place operation and our units are mixed and they’re showing us the terrain around Mosul, and what we’re taking over,” she said. “That day, Dec. 4, 2008, we had a combined convoy that was struck by a massive vehicle-borne improvised explosive device, instantly killing Sgt. Solomon Sam from the 84th, and Sgt. John Savage, from the 94th. Both units were devastated.

Schlosser was the featured speaker for Vicksburg’s Memorial Day service, held as part of the city’s 43rd annual Memorial Day activities. This year’s program and parade marked the return of an in-person event after going virtual for two years because of COVID 19. The theme was “Lest We Forget.”

“Memorial Day has been a day to get out on the water, put meat on the grill and be with friends,” said Rick Martin, a member of American Legion Post 3.

However, Martin said, the loss of soldiers who died in combat has affected the lives of their families who had to learn to adjust to the loss.

“These young lives lost will never see their sons play baseball or walk their daughters down the aisle,” he said. “They’ll never see the potential they could have reached.

Since the death of sergeants Sam and Savage in December 2008, Schlosser said, she has come to realize “what an amazing day Memorial Day is as a nation. When I think about it, it’s truly an American holiday and a day of remembrance.”

She recalled that Memorial Day began in Waterloo, N.Y., in 1866 when communities gathered for hours to decorate the soldiers’ graves.

“Union or Confederate, it didn’t matter,” she said. “They went to honor their soldiers. They called it Decoration Day because they used the flowers to decorate the graves. It soon took hold — again, grassroots — there was nothing special about it.”

In 1868, she said, the practice of decorating graves became a tradition when they placed flowers and flags at Arlington National Cemetery.

“It quickly became known as Memorial Day or Decoration Day. It wasn’t chosen for any special event other than in May, throughout our great nation, there are almost always spring flowers wherever you go.

“So this was a holiday, a remembrance day, that was created by us,” Schlosser said. “It was created by our communities, not by our government but by our desire to recognize our service members who gave all to the country that they serve and loved.

“We remember those, because it’s actually true — freedom isn’t free,” she added. “There is a cost to freedom. And we pay it today. We have soldiers still in harm’s way. We’re still losing them.”

Fortunately, she said, the country loses a lot less than in an official conflict, but soldiers are in harm’s way.

“And that’s okay. That’s what we volunteer to do. It’s our privilege.”

Schlosser said it is her honor to serve, adding, “When people thank me for my service, I sincerely tell them, ‘I have the best job in the entire world.’ I get to serve a grateful nation. I get to help people. I get to lead in my country.

That’s not common everywhere in the world.

“So your service members, we are proud to serve,” she said. “None of us want to pay that full price, but we’re ready to because we want our families and our friends to occasionally, or often, forget what Memorial Day is truly about, to let them celebrate their freedoms and their boating days and their barbecues; to celebrate their time with one another. That’s what our service members want to do.”

Schlosser asked people to take time at 3 o’clock, “which is our typical day-change,” and take a moment of silence Monday to just remember those the country has lost.

“Service members and others; we don’t mind sharing. Take a moment today to know they weren’t lost in vain, because we have an amazing nation that continues to grow and learn and care for one another,” she said.