Service Over Self returns for 29th summer 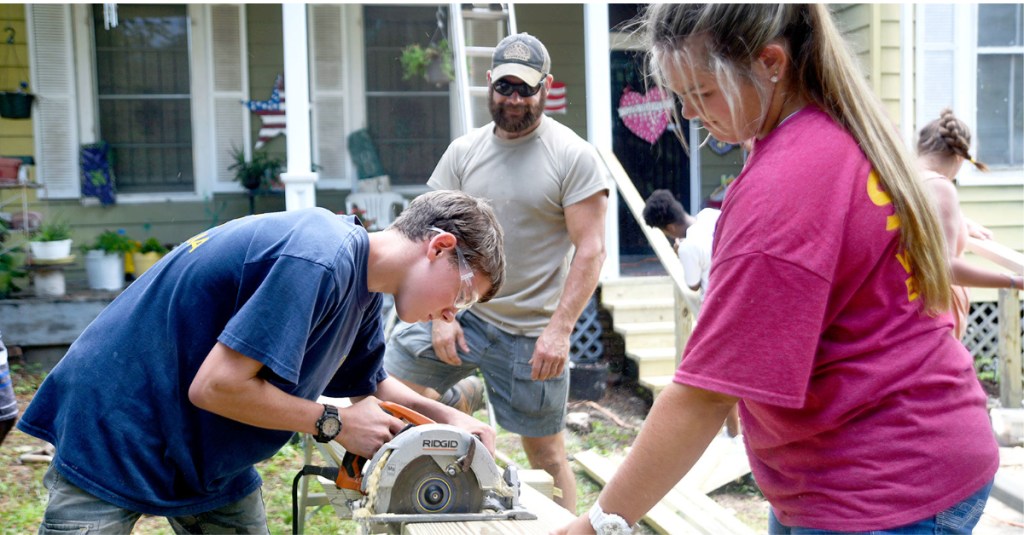 Kenai Weber, a volunteer with Crawford Street United Methodist Church’s Service Over Self mission, cuts a board while helping build a set of a stairs at a home on Main Street. During the Service Over Self program in 2020. (Courtland Wells | The Vicksburg Post)

Service Over Self, a community outreach program sponsored by Crawford Street United Methodist Church, begins its 29th year of serving the community on June 20.

Service Over Self is a program designed to use volunteers to help others have a better life by having a better, safer place to live. The program is held each summer and pairs teen volunteers who work with adults to upgrade homes in the Vicksburg area.

The program begins the Monday after Father’s Day.

“We work Monday through Friday; we have kids from all over town,” said Bob Moss, one of the program’s coordinators. “The base of operations is Crawford Street, but it’s a community operation. For the third year in a row, we have a guest group coming from First United Methodist Church in Starkville. They’re bringing the equivalent of two teams. They’re led by Maddie Jones-Burton; she’s a Vicksburg native.”

The student volunteers are housed at Crawford Street United Methodist Church during the weeklong program. Moss said the program will follow some COVID protocols, “but they’ll be much more relaxed from last year. We were all masked up at the sites, but we won’t be this year.”

Moss said the goal is to complete projects at 13 houses in the area.

“That’s our target; it just depends on how many volunteers show up,” he said. “Adult volunteers are our biggest need; the kids will come if the adults will show up. We generally have enough, but we look for two or more adults at each site.”

Service Over Self began at Crawford Street in the 1990s after Moss and Randy Stroud took 20 teenagers to Memphis, Tenn., to participate in a similar program. Crawford Street has been the program sponsor since the SOS began, and initially, the program involved teens from the church. Teens from other churches joined the program as it expanded.

The program operated under the same format until 2020, when the COVID-19 pandemic hit.

“We did SOS in 2020 but did it differently,” Moss said. “No one was housed and all the participants met on the job site. We did our best; we were a little bit too high into the COVID pandemic protocols in 2020. We tried our best to maintain social distancing and wear masks.”

When Service Over Self was formed, Moss said, “We probably never thought a lot about this longevity. It was something you thought needed to be done; you did it a year, maybe two, three, and it caught on well. I never really thought about doing it this many years.”

He believes the attraction of the program is that the student volunteers “realize that it’s something they’re doing for their community as well as enjoy doing it. Working together, doing things that maybe they don’t see their adults letting them do.

“We have them on construction sites and we lead them with good safety protocol,” Moss said. “But they get to do things — we kind of stretch their expertise and that makes the kids enjoy it and then the adults, the volunteers are extremely fulfilled by seeing young people doing what they do, giving of themselves.”

As a program leader, Moss added, “I get to see everything. I get to see the homeowners receive the benefits of what we’re doing, get to see the adults and kids; see volunteers working at Crawford Street preparing meals. It’s a very enjoyable operation from my viewpoint.

“You’ve got to have a benevolent heart to see the appeal.”