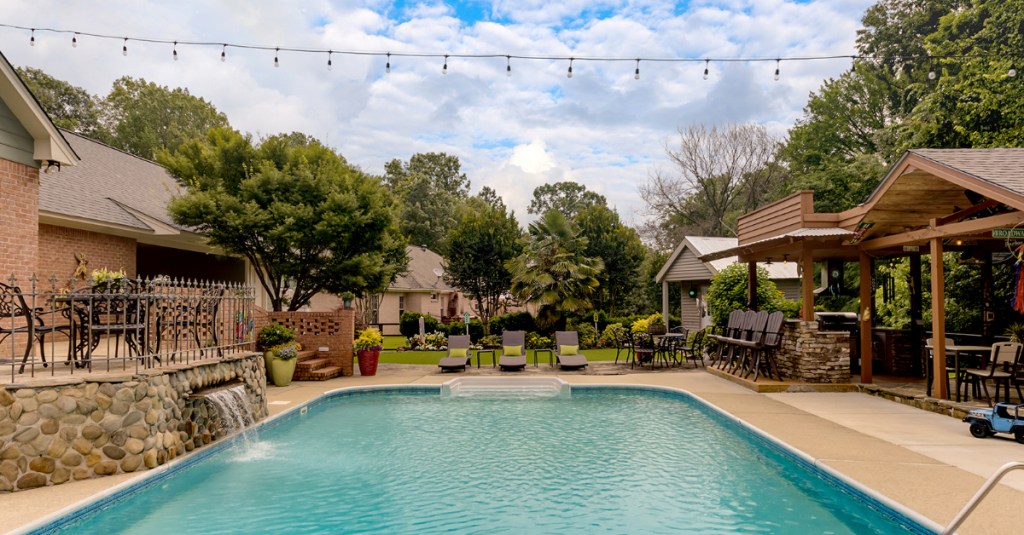 With Glen and Libby Beard operating the Flower Center, and Glen doing landscaping projects for clients, it would seem plausible the couple would have no interest in taking their job home with them.

But that’s not the case.

From the beautiful plant materials to the rock waterfall at their pool’s edge, Glen and Libby have created a backyard oasis to come home to after a long day at work.

Glen and Libby met in the spring of 1997 and, at the time, Glen was working at the Flower Center for his mother, Bobbie Beard, doing all of the store’s landscape design and installation work.

“I, on the other hand, had an office job,” Libby said.

That didn’t mean Libby was opposed to being outside. On the contrary, she enjoyed working in her yard and had even purchased a home with a swimming pool that same year.

The couple married in 2001. Shortly after, Libby said, Glen’s mother began talking about retirement. This prompted Libby to consider working alongside her husband at the retail business, located on South Frontage Road, and a year later she did.

“I loved it,” Libby said, although she admitted her first year was geared toward learning the business. “I not only learned about plants, but also chemicals and how to order all the supplies we needed.”

When Glen’s mother retired in 2003, the couple purchased the business.

Ownership brought on more responsibilities, but this didn’t keep Glen and Libby from their own backyard renovations.

The first project, Libby said, entailed removing wooden fencing and a small deck that was located near the shallow end of the 20-by-40-foot swimming pool.

While this gave visual appeal to the pool, it also created a challenge, since there was a steep incline and not much yard.

“There was not a backyard to speak of, but Glen’s creative mind went to work, and he came up with a plan to build a retaining wall up to pool level that we would fill in with dirt,” Libby said. “We would work on the wall during the weekends when Glen was off, and I would haul dirt most afternoons during the week for a couple of hours.”

The project took 17 truckloads of dirt and about a year-and-a-half to finish.

“But once the dirt was packed down, sod was laid, and flowerbeds were installed, I now had a backyard,” Libby said.

A few years later, Libby said, a second project entailed replacing the decking that was on the backside of the pool. They extended the wood retaining wall and added a flagstone patio and an outdoor room with a fireplace.

A brick wall on the opposite side of the pool, which extended from the back of the house, was also partially removed to make way for a waterfall.

By partially removing the wall, Libby said, it created a nice sitting area outside the back door.

“And it made a much nicer view from the kitchen,” she said.

And speaking of kitchens, Libby said, a few years later an outdoor one was added.

Another major renovation to the couple’s backyard space came in 2020.

In 2018, Libby said, they noticed a section of the retaining wall had begun to rot and knew it would eventually have to be replaced.

“At this point, Glen had built several pavestone walls for Flower Center customers and decided that was the way to go,” Libby said. “For this project, we did use our landscaping crew to help us because each pavestone block weighs 80 pounds, so there was no way I could help with that part.”

With the new wall and an additional four feet added to their outdoor living space, Glen’s creative juices began to flow.

“Glen began getting lots of good ideas. We decided on a concrete patio instead of flagstone and switched over to AstroTurf, which we love. We also added a cute storage building, which filled in the corner of the yard. It even has a cornhole area on the backside,” she said.

The backyard renovations have included replacing an old fence with a style Libby said she loved and using plant materials to provide privacy.

Libby said some of her favorite plantings in the yard are their Japanese maples.

“There are so many varieties to choose from. We currently have four in the yard,” she said.

One of her favorite bedding plants is the Echinacea, which is in the daisy family.

“There are so many different colors now and I want them all,” she said. “I have planted quite a few in one bed. They are a perennial so hopefully, they will be there for years to come.”

With their sprawling outdoor space, the couple’s backyard has become a great place for entertaining.

“We love to entertain. We frequently have friends and family over to cook out, and we have hosted lots of birthday parties for family and friends as well as a few announcement parties. With the nice-sized patio, we have even had Patrick Smith come play for two ‘significant’ birthday parties. That was fun,” Libby said, adding, “I am always surprised when we have people over that no matter how chilly it is they are drawn to the fireplace outside.”

“We have had rain a few times when people were over, and they still stay out in the outdoor room — it just gets a little crowded,” she laughed. And of course, during the warmer months, there are plenty of fans running to keep everyone cool.

Libby admitted that their backyard project took longer since they did it themselves.

“All the work has been worked in between working at the Flower Center and Glen’s time off doing landscaping jobs for others,” she said.

But it has all been worth it, Libby said.

“When I think back to how the pool area looked 25 years ago, I am amazed at how beautiful it has become. We started with a boxed-in pool and have made it a great place to hang out. It is now an oasis for me. In the hot months of summer, there is nothing better than getting in the pool and then cooking something on the grill.  And during the winter months, we build lots of fires, crank up the grill and eat by firelight. The backyard is also a great spot for a movie after dinner and a cup of coffee in the morning,” she said.

“My whole backyard is my happy place. It just makes me smile,” she said. 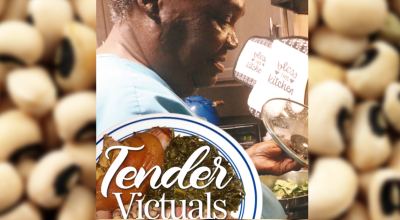