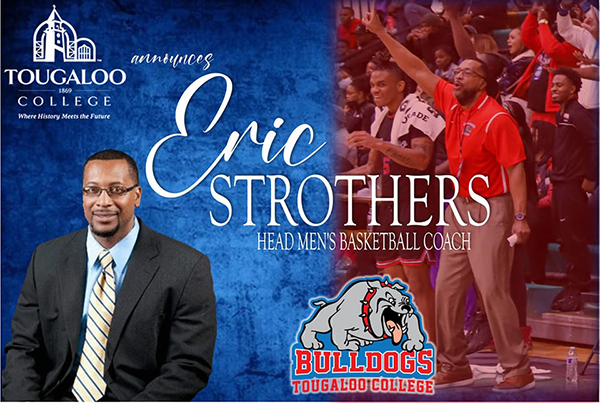 Tougaloo College is replacing one men’s basketball head coach with deep ties to Vicksburg with another.

The Jackson school announced that Thomas Billups is stepping down as head coach after eight seasons and will be replaced by his assistant Eric Strothers.

Strothers is a Vicksburg native who played at Vicksburg High School. Billups was an assistant coach at VHS from 1976-87, and helped the Gators win the 1980 MHSAA Class AA and overall championships.

Billups became became one of the state’s high school coaching legends after he was hired to lead Lanier’s program in 1991. Billups led Lanier to 13 state championship games, won eight of them, and amassed a 617-119 record in 22 seasons.

After one season at Oak Grove High School, Billups was hired at Tougaloo in 2014.

Billups had a 124-85 record in his eight seasons as Tougaloo’s head coach. Three of his last four teams won 20 or more games, with the exception being the COVID-shortened 2020-21 season when the Bulldogs finished 3-12.

In an Instagram post announcing the hire, Tougaloo said Billups will remain on its men’s basketball staff as Strothers’ assistant.

Strothers, a Vicksburg native, has coached college basketball for nearly 30 years in Mississippi but this will be his first full-time job as a head coach.

He was an assistant at his alma mater Jackson State for 20 years, joined Mississippi Valley State’s staff in 2014, and then moved on to Tougaloo in 2019.

Strothers briefly served as Valley’s interim head coach, after Andre Payne was fired at the end of the 2018-19 season, but he was not retained on the staff of Payne’s successor Lindsey Hunter and was hired to Billups’ staff during the offseason.

In three seasons together at Tougaloo, Strothers and Billups led the Bulldogs to a 45-29 overall record. Tougaloo won the Gulf Coast Athletic Conference tournament championship and played in the NAIA national tournament this past season.

Rebels romp past Hogs, now one win away from…