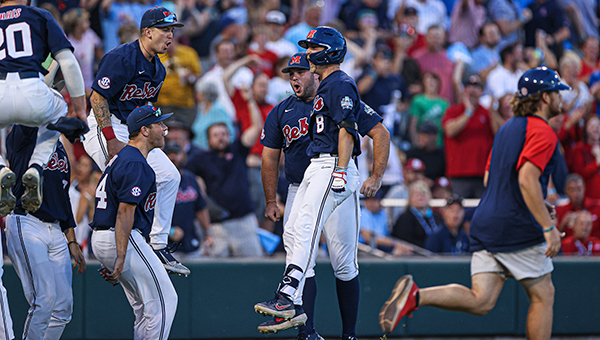 OMAHA, Neb. (AP) — Jack Dougherty knew for 24 hours he would get the ball for Ole Miss in Game 1 of the College World Series finals Saturday night, and he didn’t want to jinx himself.

Dougherty carried a perfect game into the sixth inning in his first start in nearly three months, the Rebels broke things open with three home runs in a row in the eighth, and they went on to beat Oklahoma 10-3.

Ole Miss (41-23) can secure its first baseball national championship with a victory Sunday (2 p.m., ESPN). Oklahoma (45-23) must win to tie the best-of-three finals and force a deciding game Monday.

“Go for it,” he said he told them. “You’re here to win a national championship series, you deserve to be here and it’s time to press the gas pedal.”

Oklahoma sputtered early, and with Dougherty in a groove with his fastball and slider, the Rebels were able to seize momentum. When Dougherty got in trouble in the sixth and left with the bases loaded and no outs, freshman Mason Nichols was there to limit the damage.

“I had plenty of butterflies,” Nichols said. “The biggest thing was coaches have been good enough to trust me and put me in situations earlier in the year in a big environment. I focused on my job and I’m glad I got it done.”

T.J. McCants, Calvin Harris and Justin Bench hit back-to-back-to-back homers off Chazz Martinez to make it a six-run game in the eighth. It was the first time a team had hit three home runs in a row at the CWS since LSU did it against Mississippi State in 1998.

Ole Miss nearly ran itself out of the inning. After the first two batters reached base, Kemp Alderman was thrown out at third on a bunt and Peyton Chatagnier was tagged out after sliding off the bag on an attempted steal of third. Then, within five pitches, the Rebels hit the three home runs and the suddenly uncomfortable two-run lead swelled to 8-2.

“We were getting beat in every aspect of the game until the sixth inning and we still had a chance to come back and win,” Oklahoma first baseman Blake Robertson said. “It’s an unfortunate loss, but it doesn’t define us as a team.”

Tim Elko also went deep for Ole Miss and finished 4-for-5 after entering the game 3-for-6 with seven strikeouts in the CWS.

Dougherty (4-3) took the mound with a lead in the first inning after the Rebels capitalized on OU starter Jake Bennett’s two wild pitches and error to go up 2-0.

With Ole Miss short on starting pitching because of the newly condensed CWS schedule, Bianco went with Dougherty against an OU offense known for extending at-bats and working pitch counts. Dougherty was the best option available, Bianco said, because he reliably pounds the strike zone and gets ahead of batters.

Dougherty became the first pitcher in Charles Schwab Field’s 11-year history to retire 15 batters in a row to start a game. Dougherty never had a 1-2-3 inning in his other three starts this season.

The sophomore right-hander struck out five in a row over the third and fourth innings and got a big defensive play from shortstop Jacob Gonzalez to keep the perfect game alive in the fifth.

Jackson Nicklaus broke it up with a single to center leading off the sixth and Sebastian Orduno followed with a base hit. Kendall Pettis bunted for a single, and Nicklaus scored on third baseman Garrett Wood’s wild throw to first. That ended Dougherty’s streak of 17 straight shutout innings.

Dougherty left after he walked John Spikerman to load the bases with no outs. He threw 72 pitches, 50 for strikes, and struck out six.

Nichols struck out Peyton Graham and Blake Robertson before walking Tanner Tredaway to bring in a run. Jimmy Crooks grounded out to end the inning.

“I thought that was the baseball game there,” Bianco said.

Bennett (10-4), who had won his previous six starts, struck out 10 and walked none in 6 1/3 innings but couldn’t overcome his early control problems.

The lefty threw three wild pitches in the first two innings after throwing three in his first 110 2/3 innings this season, and all of them led to Ole Miss runs.

“They took the momentum from the beginning of the game,” Oklahoma coach Skip Johnson said. “We’ve got to learn our lesson from today and move on.”