Service Over Self helps improve lives of Vicksburg residents 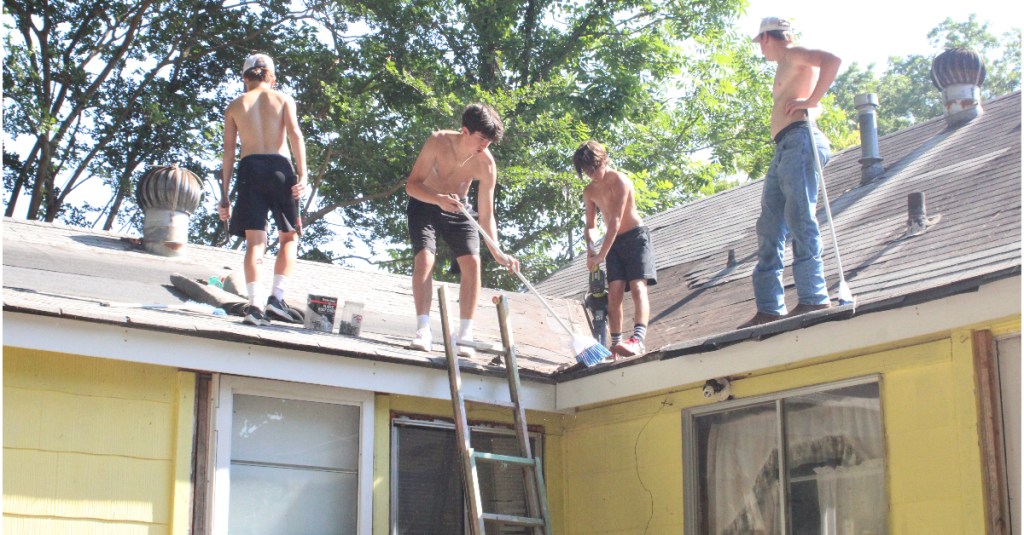 Volunteers Harber Williams, Bryce Billingsley, Holden Davidson and Gray Lampkin remove debris after patching some leaks in a roof on a house at 810 Patton St. (Photo by John Surratt | The Vicksburg Post)

Wednesday morning, a group of young people and adult volunteers descended on a Halls Ferry Road house to begin cleaning and making other improvements to its interior.

On Patton Street, another group of volunteers was putting a fresh coat of paint on the exterior and interior of one house while next door another team was repairing the roof and making other improvements.

Service Over Self, a community outreach program sponsored by Crawford Street United Methodist Church, began its 29th year of serving the community on Monday.

The program is designed to use volunteers to help others have a better life by having a better, safer place to live. It is held each summer and pairs teen volunteers who work with adults to upgrade homes in the Vicksburg area.

Monday, the program sent teams to a total of eight homes in Warren County and Vicksburg, where they performed different projects to improve the properties. And each team consisted of “rookies” and “veterans.”

Katelyn Bateman, who attends Starkville First United Methodist Church, was making her second visit to Vicksburg with her church group.

“It’s one of my favorite things; helping people,” she said during a break from scrubbing a door at the house at 2808 Halls Ferry. She said her youth leader, Maddie Jones-Burton inspired her first visit two years ago.

“(Burton) grew up in Vicksburg and I always heard how much fun it was, so I came down,” she said.

Tracie Davis, who attends Crossway Church, has participated in SOS for three years.

“I just love helping people in the community that really need it and deserve and I love seeing their faces light up when they see their house has been cleaned and people are able to help them,” she said. “It’s a good feeling.”

Jackson Holden, also from Starkville, was participating in SOS for the first time.

“I thought it would be another way to help people with my friends,” he said.

“We had all kinds of blue roofs; we’re trying to fix where the roof was leaking,” Jones said as watched a group of volunteers on the roof.

One of those workers was Bryce Billingsley from Georgia, who was in Vicksburg visiting his grandparents.

“This has been a good week,” said Lucy Young, who attends Crawford Street. “We’ve gotten so many things accomplished. Hopefully by Friday we’ll leave the homeowners in much better condition than we found them. “That’s our main goal; make life better.

“The adult volunteers and other workers from the community that have helped have made it a community effort.”

Service Over Self began at Crawford Street in the 1990s after church members Bob Moss and Randy Stroud took 20 teenagers to Memphis, Tenn., to participate in a similar program. Crawford Street has been the program sponsor since the SOS began, and initially, the program involved teens from the church. Teens from other churches joined the program as it grew.

The student volunteers are housed and fed at Crawford Street United Methodist Church during the weeklong program.