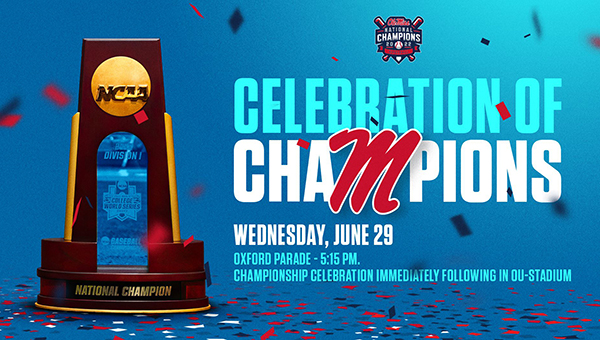 OXFORD — The national championship trophy is on its way back to Oxford, and the parade floats are revving up.

Ole Miss will celebrate its College World Series championship on Wednesday, with a parade through the Square that will culminate with an event inside Oxford-University Stadium/Swayze Field.

The school will also honor the team with a celebration at the Walk of Champions on Monday at 2 p.m.

The parade will kick off at 5:15 p.m. Wednesday. The route will begin at midtown, go past The Graduate on North Lamar, take a full circle around the courthouse, continue down South Lamar, take a right on University and end at the Lyceum.

The parade will include Ole Miss baseball players and coaches, athletics and campus administrators, as well as other invited guests and honorees.

Gates at the stadium will open at 5 p.m. for a celebration following the parade. Coaches, players and team personnel will speak and be honored at the ceremony that begins at 6.

All seating will be general admission. Coolers and chairs will be allowed in left and right field only. No glass or prohibited items will be allowed inside the stadium and all items must be cleared immediately following the event.

Free parking will be available on campus.