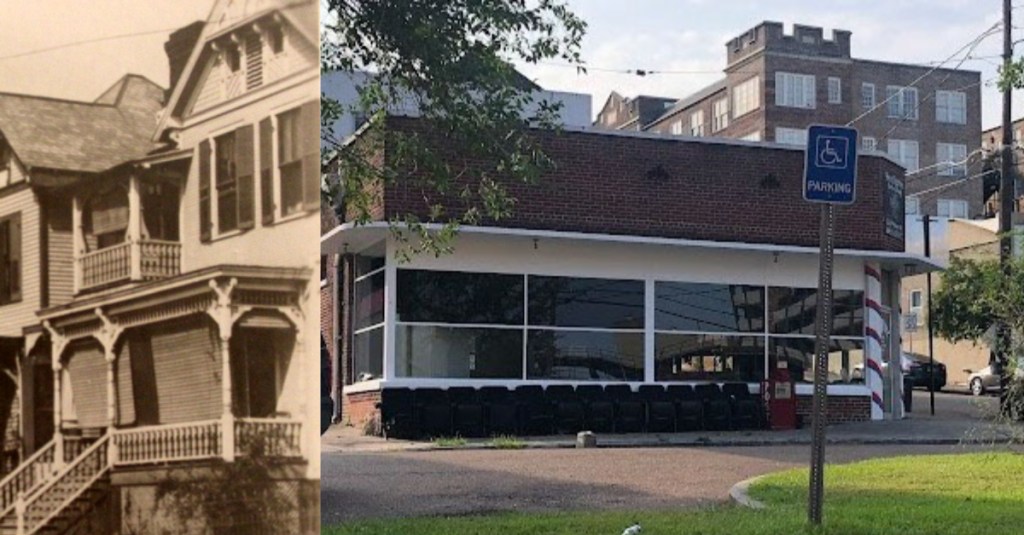 The home formerly located at 1123 Monroe St. was constructed in 1903. Today, the site is home to Headquarters hair salon. (Photo Submitted.)

This two-story Queen Anne residence was built on the corner of Monroe and Clay streets in 1903 by Robert Voellinger.

The plans for this house were identical, with the exception of some architectural detailing, to the house next door which was built seven years earlier, likely by Robert’s brother, William. The Mann Building and Manufacturing Company built the house at 1223 and Robert Voellinger and his family moved into it in August 1903.

Robert was the inspector for the Vicksburg Board of Health, tasked with checking every property within the city to make sure that owners and renters “keep your premises clean, gutters in front of your house and in yard, put all necessary gutters in yard in repair, sprinkle lime in closet, keep all vaults clean, put all trash in a box or barrel and screen all cisterns and water barrels.”

He gave a time limit when this work had to be completed and then he said that violators would “be dealt with as the law directs.”

In 1906, residents were given two weeks to comply. When Voellinger reported back to the Board of Health, he stated that “in making his rounds he had come across many places which looked like hog pens. There were many cases of bad closets (outhouses) and in such cases, he had served about 200 notices. He requested that the city pass an ordinance requiring all closets to be dug at least six feet into the ground. He called attention to the fact that there were many closets in the city which had no vaults.”

Voellinger also reported to the board that he had been informed by a physician in Vicksburg that 50 out of 100 babies in the city died on account of bad milk supplied to them. The doctor had tested five suppliers of milk and found that only one of these was not adulterated.

Voellinger was also an amateur boat builder. An article in the Vicksburg Herald in August 1897 reported that he was a boat builder of the highest quality “and could, in fact, become a professional at any time, such is his skill” and that “he has turned out a dainty little craft that challenges the admiration of every sportsman who beholds it.  The little vessel is 16 feet long and is clinker-built, sharp at each end and fitted with Allen’s bow-facing oars, which enable the oarsman to look ahead at all times.  It is very light, weighing only 65 pounds, and is as attractive in finish as in shape.”

In 1911, the house is the home of Henry Mayer, the manager of the Walnut Street Theater and a distributor of bill posters and outdoor advertising. In 1914, John (superintendent with the Y an MV Railroad) and Dorothy Meehan lived in the house. Ida Feith and her family lived there from about 1918 to about 1929 when the house became Mrs. Pearl Houston’s furnished rooms.

The house was gone by 1948 and the lot was vacant until the current building was constructed in 1957.