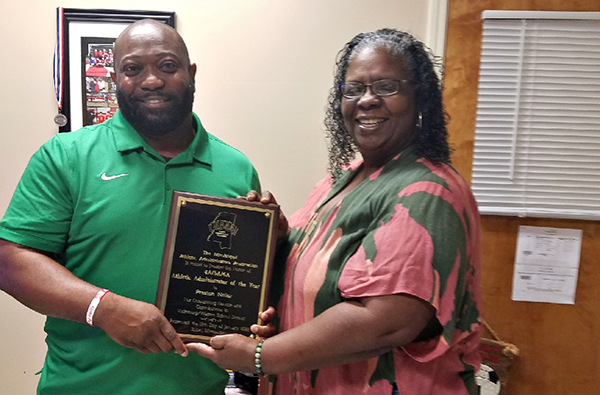 Preston Nailor’s name went on the plaque. The honor, he insists, belongs to everyone else.

The award honors an athletic administrator across a number of criteria, ranging from experience and accomplishments to the way they care for their students and coaches. It is given through the Mississippi High School Activities Association.

“I was grateful enough and humble enough to receive that for our district, and for the hard work that everybody has done — not just me,” Nailor said. “My name is on it, but I feel like it’s a collective effort with all our coaches, athletes and administrators.”

Nailor was hired as the VWSD’s athletic director in 2016. During his tenure overseeing the programs at Vicksburg High School and Warren Central High School, as well as their accompanying junior high schools, he has led them all into a new and modern era.

The school bond issue that passed in 2018 led to major renovations of stadiums, gyms, running tracks and baseball and softball fields at both high schools.

Nailor also pushed for the addition of several new varsity sports to the district’s offerings, such as bowling and e-sports; overseen a district-wide apparel and equipment contract with adidas; and the creation of the VWSD Athletic Hall of Fame.

“I’m very proud of everything we have accomplished as a community,” Nailor said. “I look at the number of Division I-ready athletes we have now, and I think that number is going to increase because our kids are more focused on the ACT and we have quality coaches that are pushing the kids to not only get recognized but to put them in a place where they can be recognized.”

On the field, the VWSD’s teams are also on an upward trend.

Vicksburg High’s football, girls and boys basketball, baseball and softball teams all made the MHSAA Class 5A playoffs during the 2021-22 school year.

Warren Central’s football team continued one of the longest active playoff streaks in Class 6A, while both of its basketball teams, baseball and softball teams also made the state playoffs.

With a strong foundation laid, Nailor is hopeful the best is yet to come.

“I think we can only go up from here,” he said. “Now we have adequate facilities for everybody to train in, to work in, to continue to accomplish those district and regional championship goals. Now we want to try to get a state championship from a couple of our bigger sports. I think we’re heading in the right track to get that done.”