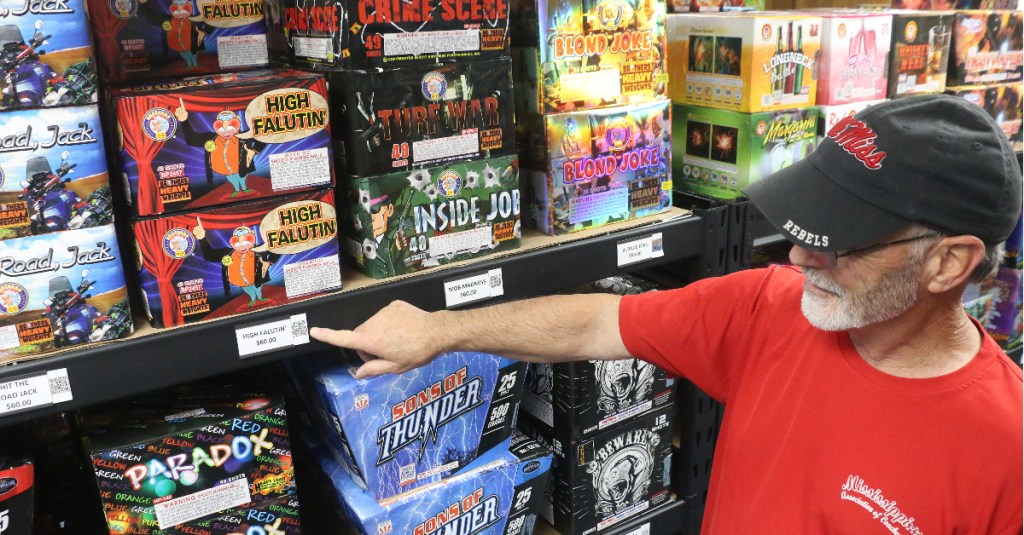 Rickey Mitchell pointing out the new QR codes for the fireworks. (Photo by Terri Frazier | The Vicksburg Post)

The whistling sound of fireworks signals to spectators that the show is about to begin.

And then with a loud boom; the wait is over.

A spectacular spray of colors explodes into the night sky, and the crowd responds with oohs and aahs.

Fireworks have been around since China’s Han Dynasty, which began in 206 BC, and with their brilliant bursts of colors, they are still a magical giving delight to every age.

Rickey Mitchell, the owner of Mitchell Distributing, the only locally owned fireworks distributor in Vicksburg, can attest to this.

He has been selling fireworks since he was 9 years old, and their allure is still popular.

Located at 3506 Manor Drive, Mitchell Distributing has a large variety of fireworks from “Rush Hour,” which has 100 shots and lasts three minutes; to party packs, which include a variety of pyrotechnics; to sparklers, all of which line the shelves in the air-conditioned facility.

This year, Mitchell said he has implemented something new for his customers to help with the description of the fireworks — QR codes.

While Mitchell said he is still happy to explain how the fireworks will display, by using the QR code, he said, customers can get a visual.

“So, you can try before you buy,” Mitchell said.

QR codes for fireworks became available in 2020, but because it was during the COVID lockdown, many people were not exposed to them, he said.

In addition to shopping in the cooled facility, another unique aspect of Mitchell Distributing is its ability to offer personal service.

Not only does Mitchell give his customers a “little something-something, or lagniappe,” as he calls it — a few free items — they also take call-in orders.

“We have some people who call in ahead of time and tell us how much they want to spend and then we will go ahead and box their order up,” Mitchell’s wife, Melba, said. “They trust us to pick their items for them.”

This nice little perk could certainly come in handy, especially with the Fourth of July only a couple of days away.

Imagine not having to fight the crowd, who will be scrambling at the last minute to find the most popular items advertised, which Mitchell has in stock, currently — the “High Falutin” and “Hit the Road, Jack.”

Those who place an order can just leisurely walk in and pick up their package.

“I don’t want anyone to get hurt. I want everybody to be safe,” Mitchell said, and by safe, that includes having adult supervision when shooting fireworks.

Also, he said to read the warnings printed on the packaging.

Mitchell got his start selling fireworks when he started working for his father, the late Joe Mitchell.

Mitchell’s dad, who was the son of Lebanese immigrants, had also begun selling fireworks at a young age when he set up a card table in front of a Vicksburg dry cleaner’s, peddling his goods.

“It was in 1939 during the depression, and nobody had a lot of money,” Mitchell said, “So he (Joe Mitchell) decided he was going to do something to help the family.”

Mitchell’s father eventually became the owner of a furniture business downtown, but he continued selling fireworks.

For years, Mitchell said he and his father rented space to operate Mitchell Distributing, but in 2000 they decided to forgo renting and purchased the facility on Manor Drive.

Father and son planned to open the doors to their new facility in December of the same year, but sadly, Joe Mitchell died in October.

Thankfully, Melba was able to step in and help and in doing so has continued to be a vital asset to the business, as well as some of the couple’s extended family members.

Legally, fireworks can only be sold from Dec. 5 to Jan. 2 and from June 15 to July 5. Therefore, the Manor Drive facility has become the family hub for the holidays.

“Now we all just celebrate down here,” Melba said.

After nearly 60 years of selling fireworks, Mitchell said, he has built a strong customer base, so much so that he is seeing second and third generations.

And that’s fun, he said, “Especially since I’m like a 12-year-old kid in a 65-year-old body,” Mitchell laughed.

Through Saturday, Mitchell Distributing will be open from 9 a.m. until people stop coming in, Mitchell said, and on Sunday from “10ish” until.