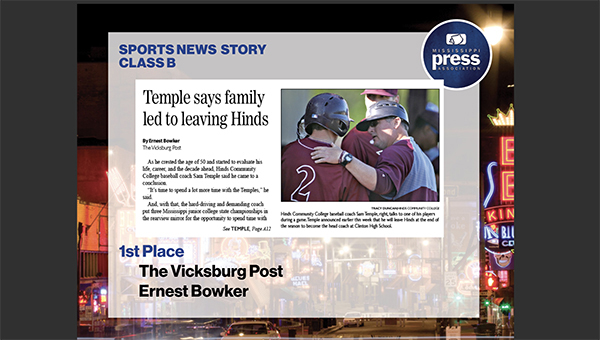 Saying this might be considered sacrilege to some of my fellow journalists, but I did not get into this business to change the world.

I never felt a calling. Never felt compelled to speak truth to power, or any of the other lofty and haughty ideals we’re supposed to aspire to.

I got into journalism because, as a high school student, I seemed to have a talent for writing. Finding a steady job working in newspapers seemed like an easier way to make a living with it than trying to become the next great novelist.

There have been occasions, of course, when I’ve had to write difficult stories and ask hard questions. By and large, however, my career has been based on cranking out informative stories and hitting deadlines — the gritty, unglamorous sausage-making that they don’t make movies about.

At the Mississippi Press Association Awards last week, I won five awards spread across four categories, including a first-place award for the best sports news story. My math is probably off by a few, but over the course of 24 years at The Vicksburg Post, I think it brings my personal total to about 70.

My colleagues here at the Post also did pretty well. News editor Anna Guizerix was honored for a series of stories on youth gun violence. Features writer Terri Frazier spearheads our “Vicksburg Living” magazine that received a second-place award among all of the state’s newspaper magazines. Anna, Terri and news reporter John Surratt got another award for their investigative coverage of the Yazoo Pumps Project.

I’m honored to work alongside all of them, as well as all of the reporters, editors and photographers over the years who helped turn The Vicksburg Post into the most reputable news source in our community and one of the best in Mississippi.

Of course, awards aren’t everything. I’ve seen stories that were great that didn’t win anything, and stories that felt merely above-average nab first-place awards. The difference between first place and nothing at all could be how close to lunch a hungry and impatient judge reads your stuff.

Because of that, I don’t often brag about winning them. There are too many subjective variables that can go into the process. But when you do things right and do it often enough, that consistency tends to be rewarded.

During the 2 1/2 decades that I’ve been here — and the century-plus that I wasn’t — through countless staff changes that are a natural part of the business, The Vicksburg Post has maintained a consistent level of excellence that I’m proud to be a part of.

It’s sometimes nice to take a minute, give ourselves a little pat on the back, and remind everyone else — and ourselves — that we’re pretty dang good at what we do.