Addiction as a disease: Understanding the path to recovery 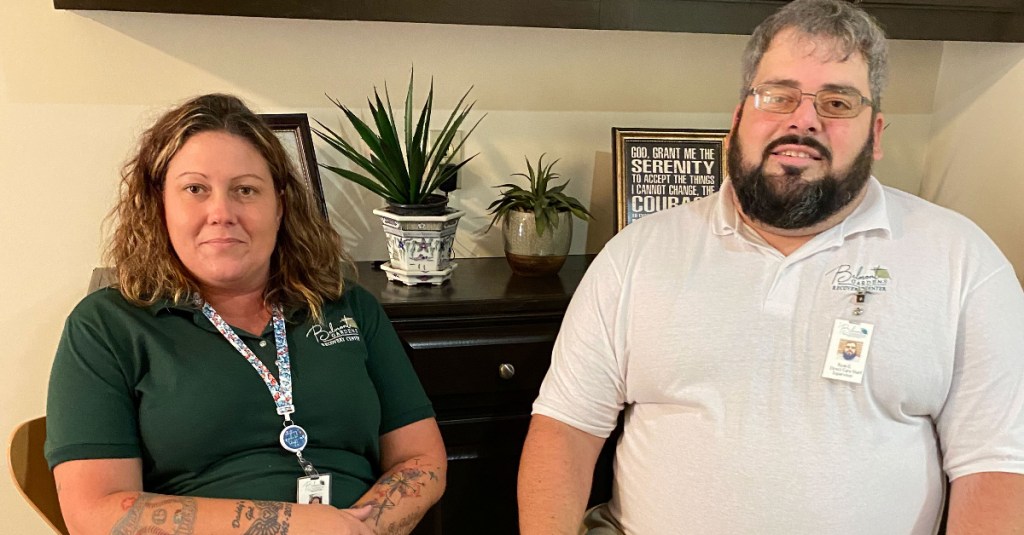 Kelli Caves and Ryan Engles pose for a picture at the Belmont Gardens Recovery Center. Both Caves and Engles serve as peer support specialists for those seeking treatment for addiction. (Photo Submitted)

Editor’s note: This is the second in a series about Belmont Gardens Recovery Center and addiction resources in Warren County. To read the first story, click here.

Often misunderstood, addicts suffer from a disease — one that is classified by the American Society of Addiction Medicine as a primary disease of the brain.

However, many think it is the result of some other situation, problem or health issue, which couldn’t be farther from the truth. Addiction is “hardwired” into the brain, making it no different than other illnesses that affects the body or mind.

“Diabetics make bad choices all the time,” Mississippi State Health Officer and Vicksburg physician Dr. Dan Edney said. “For diabetics, it’s usually the wrong food. But they still have the disease of diabetes, it still has to be treated and you work on your choices, and you try to medicate those choices, but you have to treat the disease.”

Addiction is the same, Edney said.

Unfortunately, even addicts don’t realize they have a disease, Edney said, “So the first thing you have to do is help them understand what’s been happening to them and what’s been going on and what it’s going to take to get better — and you have to educate the family.”

Being certified in addiction medicine, Edney knows that for those in active addiction, treatment is imperative.

That is why he recently opened the Belmont Gardens Recovery Center, which is a private facility that accepts traditional health insurance, Medicaid and Medicare and private pay for those with limited or no resources.

“Unless they (addicts) are in treatment or unless we get our arms around them, they cannot fix themselves and they can’t just stop,” Edney said. “If they could, they would. Because by the time they get to us, they are not having fun anymore. The fun is long gone, they are just trying to survive.”

Edney added that when the disease is active, the addict “has to acquire and use the substance otherwise they will be tormented by what we call the Lizard Brain.”

This “lizard brain,” or “primitive brain,” if not satisfied will cause the addict all kinds of discomfort, Edney said, until they acquire the drug.

“And it will literally torment and torture them until they do,” he said.

With addiction, Edney said, there is a specific part of the brain that is targeted, which means some individuals are genetically predisposed to the disease.

And for these individuals, if there is sustained exposure to an addictive substance, “the disease activates, and it (using drugs and or alcohol) then goes from being a choice to there being no choice,” he said.

Trauma also increases the risk of addiction for those born with a genetic predisposition.

Typically, addicts are those who have had some type of trauma in adolescence or early adulthood, Edney said.

“This can be physical trauma, emotional trauma or sexual trauma. It can be a whole list of things,” he said.

Addiction, untreated, is a progressive illness, Edney said, one that leaves the person suffering with basically three options.

“If they don’t get treatment, they will either be sent to Parchman because of their behaviors — DUIs or stealing — or they wind up at Whitfield because of significant brain impairment or they will die,” he said.

“It’s one of those three options, or they get clean and sober,” Edney said. “And if you listen to them, they call it ‘getting normal,’ and that’s when they are not in withdrawal and craving all the time.”

The disease of addiction can be treated, Edney said, and when it is, “The patient starts thinking normally and making normal decisions. Executive function comes back where they make appropriate choices and decisions, and they get their life back.”