Anchored Down: Tourists come off riverboats to see Vicksburg sights 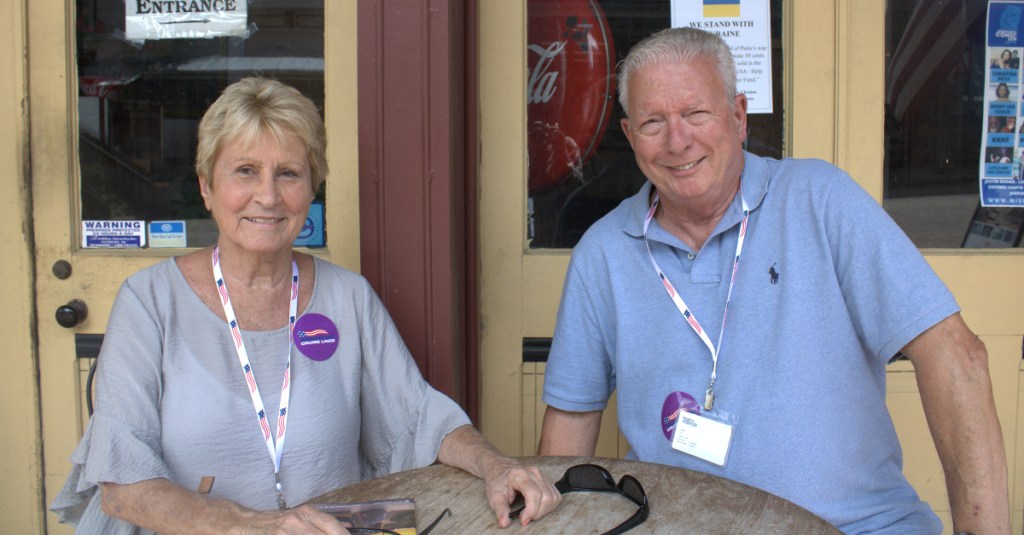 John and Sandy Hill visited Vicksburg recently as part of a Lower Mississippi River cruise on the American Duchess. (Photo by Tat Ross | The Vicksburg Post)

Carrying a capacity of 166 passengers, the American Duchess docked in Vicksburg in June for a duration of two days, allowing tourists to enjoy the scenery and historical landmarks.

According to passengers, Vicksburg was the first stop on their river cruise traveling along the Lower Mississippi River. For many, this was their first visit to the River City.

John and Sandy Hill, a couple from South California, said they had a great first time in Vicksburg. The couple said that they really enjoyed the scenery and learned a lot.

“It’s just a beautiful little town, and we learned some things in the Civil War Museum down here that we didn’t know,” John said.

The Hills said that the river cruise provided tour guides that led them to the different tourist attractions around town. The couple said they enjoyed the Riverfront Murals and shared the most interesting thing they saw on the tour.

“One of the murals, one of the things that was interesting was the little house in there that floats down the (Mississippi) River. Our guide said people would build those to float their whole family and livestock down the river,” Sandy said. “Then they’d get out here to Vicksburg and take the wood and everything from the boat, take it apart and build a house,” she said.

The couple also said that Vicksburg is a beautiful city that holds so much history it could take more than one visit to absorb it all. However, it was a pleasant stop on this trip to celebrate their 59th wedding anniversary.

Walking the streets of Downtown Vicksburg, a family of three, Jackie, Mike and Stefanie Webb, from West Virginia, took a riverboat cruise for the first time. Jackie Webb said that her husband is from Memphis and had never traveled the Mississippi River before, so this summer they did it as a family.

The Biedenharn Coca-Cola Museum was the real eye-catcher for the Webbs, but Jackie added she felt like there were not enough places to shop.

“The Coke Museum, the first place it was bottled, that’s history,” Jackie said. “But they need more things that people could buy. The shops where people will want to buy paraphernalia and memorabilia.”

On the other hand, Vicksburg left Stefanie in shock from its size.

Still, the Webbs said they enjoyed all Vicksburg has to offer, and they’re planning to visit again.