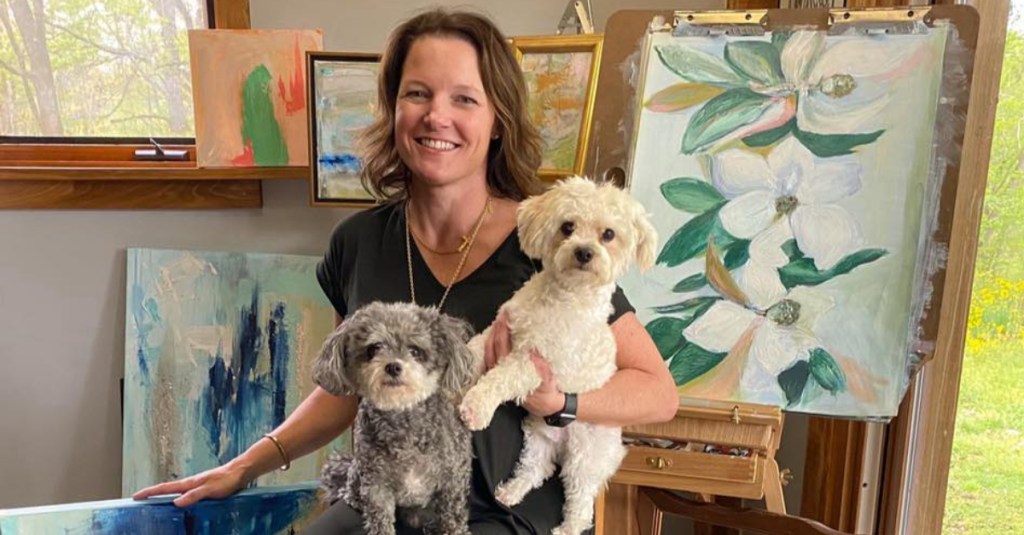 Vicksburg resident Clare Huntley is no stranger to the local arts scene — her husband, Clark, is known for his watercolors — but all it took was one week of isolation to get her own creative wheels turning.

During the February 2021 ice storm, Huntley found herself stranded in her Bovina home with her husband, two daughters and the family’s five dogs. When her daughter Josie broke out the art supplies, Huntley decided to join in on the fun after years of her creativity laying dormant.

“In high school and everything, I would doodle and do art and draw, but then college and life and children came, and I put it down completely,” Huntley said. “But it’s kind of funny; last year, when the ice storm hit, we were without power for like, a week or so. I was at my in-laws’ house next door, and my daughter was dabbling in watercolors. She paints on these little canvases and I said, ‘Josie, I’m going to sit down and paint with you.'”

Huntley completed five floral watercolors that week, and then was struck with another idea: What if she framed them and gave her paintings to friends as gifts?

The response was tremendous, she said, and since then, Huntley Collective Fine Art, a partnership between Clark and Clare, has taken off.

“I posted it on Facebook, and since then, people have been coming to me and asking me to paint things for them,” she said. “Caroline Youngblood is a young artist whose work is an inspiration, and my first two commissions were a blue heron and a floral I did which were inspired by her work.

“But now, all I do is dog portraits, it seems like.”

While her pet portraits are the bread and butter of Huntley Collective, diners at Main Street Marketplace can view her work up-close. As part of a fundraiser for local non-profit Good Shepherd, Huntley said she had the opportunity to paint the restaurant’s exterior. Owner Sally Bullard has the piece in pride of place inside the popular plate lunch spot.

“The dogs are my favorite animals, so anytime I get to paint a dog it’s a real treat,” she said. “My own dogs always sit at my feet while I paint. I get lots of pictures of my subjects, and between their name and the traits their owner describes about their dog, I try to capture that personality in my work.

“The most important part of a pet portrait, I feel like, is the eyes,” she added. “I can paint an animal, and the eyes are really what make it look totally different and come alive.”

Each of her works is also available to be framed by Huntley herself. She sustainably sources the frames from a variety of places, most often selecting antique or outdated styles so she can paint them and give them new life.

In addition to dogs, landscapes and florals, Huntley has also built a name for herself with her bright, textured abstract paintings.

Using a variety of tools to spread, splash and splatter acrylic paints across large canvases, Huntley said the statement pieces are some of the most personal works of art she creates.

“When I do florals or abstracts, I tend to gravitate toward brighter colors. And I tend to work in layers, which lends itself to abstracts because I can keep coming back to it,” she said. “I use knives, brushes, tinfoil, even my fingers — I want to show the marks, and not smooth out everything. I want to leave texture, and actually show the act of painting.”

Huntley can be contacted via her Facebook page, https://www.facebook.com/huntleycollective, or by email at huntleyclare@gmail.com.