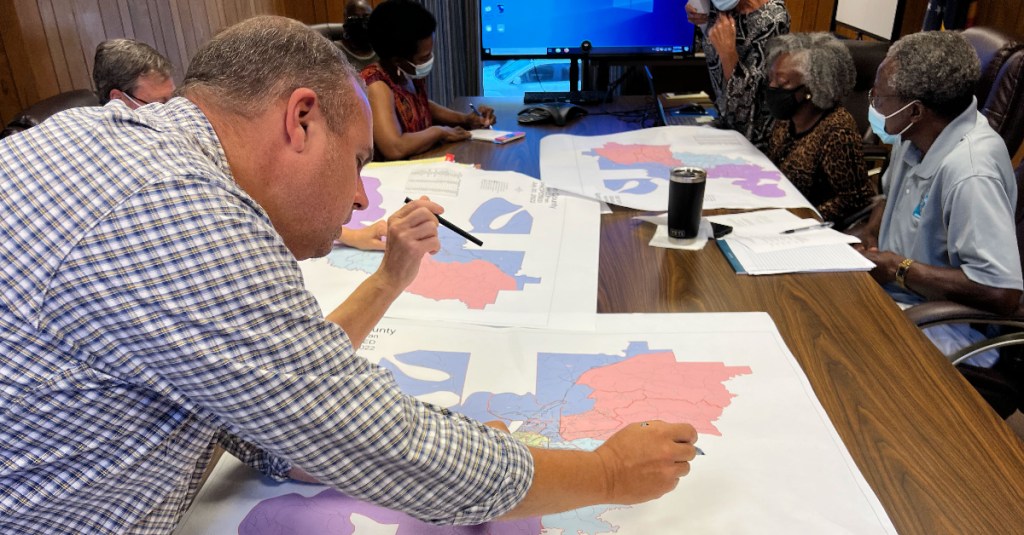 District 1 Supervisor Edward Herring examines a map of precinct line recommendations presented to the Warren County Board of Supervisors on Monday. (Photo by Anna Guizerix | The Vicksburg Post)

The Warren County Election Commission presented its precinct recommendations to the Board of Supervisors on Monday morning, in hopes that re-drawing precinct lines and eventually aligning them with the city of Vicksburg’s lines will eliminate voter confusion.

As stated by the commission chair and District 4 representative Sara Dionne, the recommendations were based on fulfilling three priorities for voters in the county.

“As a group of five commissioners, we have three priorities that we discussed over and over again,” Dionne said. “No. 1, that city residents vote in a polling place within the city limits. No. 2, that we use polling places that are convenient, not too far to drive and in safe neighborhoods with good parking and lighting. And third, that we use less polling places county-wide to save tax dollars and make it easier to find enough poll managers.”

Overall, Dionne said, the election commission’s goal is for residents to go to their nearest polling place to vote.

For District 1, there were “minimal changes,” according to the commission. District 1 Commissioner Nancy Hale was not present at the meeting, but Dionne presented those changes to the board.

In District 1, the east side of Highway 3 was scooped into the district. In the areas between Beechwood, the Vicksburg National Military Park and Clay Street, some previously fragmented portions of the district were eliminated thanks to the redistricting plan approved by the Board of Supervisors earlier this year.

Where changes are concerned, impacted voters will receive notice of a change in their polling place in advance of upcoming elections.

“(District 1) unfortunately, has 22 people that live inside the city limits, and so those people will have to vote somewhere else for city elections, which we were desperately trying to avoid,” Dionne said. “We are planning to personally notify each and every one of them so they know where they are supposed to vote for county elections.”

District 2, represented by Election Commissioner Bobbie Bingham Morrow, saw several changes to precinct names and the addition of a precinct, bringing its total up to seven.

“We still have the auditorium, Kings and Eagle Lake named the same thing,” Morrow said. “The precinct we’re planning to add is the Medgar and Angela Scott Foundation building. Those voters were added to this district. So instead of having six precincts, we will now have seven.”

The additional area added to District 2 was pulled in from Districts 1 and 5.

“(District 2 Supervisor William Banks) and I went over the map and thoroughly looked at each location,” she added. “We’ve driven the locations as well. So we have a pretty good idea of what the layout is and where those voters will be going to vote. We’ve worked it and we’ve walked it.”

However, during the presentation to the Board of Supervisors, Circuit Clerk Jan Daigre pointed out concerns and complaints about one precinct in the district: Elizabeth Circle, which reports a voting-age population of 645 people.

Daigre said her office receives more complaints — and more absentee votes — about the Elizabeth Circle precinct than any other in Warren County.

When the idea was suggested to consolidate the Elizabeth Circle precinct with nearby Spring Hill Church, District 2 Supervisor William Banks responded by saying it was “completely out of the question.”

Morrow went on to explain that a portion of voters in the Elizabeth Circle precinct are elderly and have issues with transportation, and as such, the current location is the most convenient for them. She also asserted that many of the complaints Daigre referenced were brought about due to the precinct’s location in a primarily Black neighborhood.

“Let’s just be frank about what’s going on in Elizabeth Circle. The individuals who are complaining are just afraid to come into that community because it’s a majority African-American community,” Morrow said. “And African-Americans are afraid to come in as well. But what’s happening in Elizabeth Circle is happening all over Warren County. I’m not understanding why the voters choose to think that it is some violent gun zone.”

Daigre denied that being the case, saying to Morrow, “Those are your words. I’m telling you from the clerk’s office, that is the precinct we get the most complaints about.”

The Elizabeth Circle neighborhood has a history of criminal activity. Among other felony arrests over the last two years, on the night of June 8, 2021 — election night for the city of Vicksburg’s last mayoral election — 14-year-old Thomas Hardman shot and killed his 11-year-old cousin, Rashawn Wilbert at an address on Elizabeth Circle.

Both Banks and Morrow said they had “no reservations” about voting in Elizabeth Circle or traveling through the neighborhood.

Other issues presented by the Board of Supervisors while reviewing recommendations for District 2 precinct lines included the distance some voters will have to travel to reach their polling places.

If approved by the Board of Supervisors, some city voters in District 2 will have to go to two different polling places to vote in city and county elections — and some will have to travel as far as 16 miles one way in order to reach their polling places. However, Morrow said, the addition of the Medgar and Angela Scott Foundation precinct will remedy some of the issues, as it is centrally located on Sherman Avenue in the district.

The majority of District 3 lies within Vicksburg city limits, and following redistricting, the addition of a precinct was recommended to the board.

“Plumbers and Pipefitters is in District 3 now, where it used to be in District 5,” said District 3 Election Commissioner Elva Smith. Traveler’s Rest is moving to Parkside Playhouse. The Cherry Street precinct at Serēn venue is already in the American Legion precinct.”

Dionne spoke once more as she presented her recommendations for District 4, which included making changes to maximize the convenience of polling places within communities in the district.

“There were several places in District 4 where people were having to drive a long way to go vote, and that’s been true since the last time we did this,” Dionne said. “So, we’ve made some changes to the precinct lines to let people vote in their communities instead of having to go farther away. So, the Elks line has changed; we’ve also made sure that, as much as possible, people can vote as close as they can to where they live.”

Dionne said polling places themselves haven’t changed in the district, but precinct lines would change if her recommendations were approved by the Board of Supervisors.

“All mine are on main roads, easy to find,” she said. “We had people by the river bridge that were driving out past the airport; now they’re just going over to Elks. Those are the kinds of changes we’re making.”

District 5 saw a decrease in population as approximately 2,000 people were absorbed by Districts 1, 2 and 3.

Election Commissioner Debra Grayson said the population decrease will also lead to a decrease in precincts in addition to renaming of some precincts.

“We closed Tingleville, which was a scary hazard for the county. On a large election for the county, people were parking everywhere and walking in the middle of the road,” Grayson said. “Beechwood is now going to be Old Highway 27, Lee Road will be Lee Road Fire Station, the Old YMCA will now be Porter’s Chapel and Moose Lodge will be Fisher Ferry.

“I’ve gone from six precincts to four, and I’ve just moved people to their closest precinct,” Grayson said. “All city voters in District 5 will all vote in city limits.”

District 5 Supervisor and Board President Kelle Barfield said she supported the changes, and agreed with renaming polling places across the county.

As Dionne explained, naming a polling place based on its geographic location versus the building where it’s located will not only decrease confusion; it will also save taxpayer dollars in the long run.

“(If we name polling places to match building names) we have to re-label every piece of voting equipment… everything will have to be renamed and repainted, and that’s a great cost to the county,” she said.

Next Steps for Elections

The Board of Supervisors is anticipated to discuss and possibly approve precinct lines during its Aug. 1 meeting.

Once those are approved, Dionne said, the city of Vicksburg will attempt to align its polling places with the county inasmuch as it is able.

Dionne was appointed by Mayor George Flaggs Jr. as one member of the city’s redistricting committee, which is led by City Clerk Walter Osbourne, and added that Flaggs is “totally on board” with aligning precincts between the city and county.