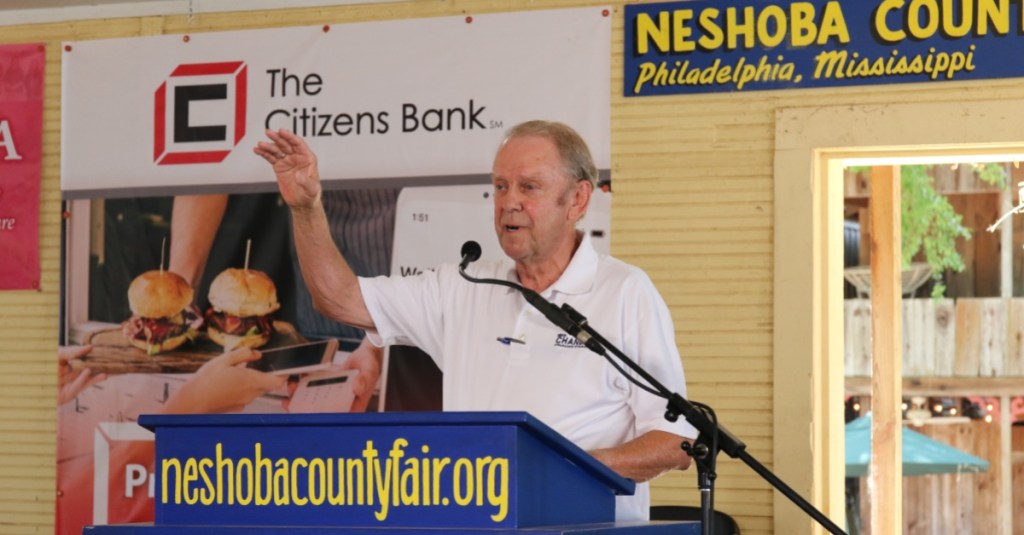 Chaney began his speech with a bid for re-election.

“To be clear, I am running and seeking reelection for your insurance commissioner and I am asking for your continued support and vote,” Chaney said.

Chaney devoted much of his 10-minute speech to the ongoing dispute between the University of Mississippi Medical Center and Blue Cross & Blue Shield of Mississippi. The dispute has left many Mississippi residents, some of whom are in need of critical care like organ transplants, uninsured and without access to local healthcare.

“I do not regulate large group health insurance rates and I have no authority to regulate medical healthcare costs or drug costs except for balanced billing issues,” he said. “The federal government has refused to control drug costs and has done very little to reign in healthcare costs, and this is basically the root of the problem between the UMMC and Blue Cross & Blue Shield (of Mississippi).”

Chaney said he was not happy with either party’s effort to resolve the dispute.

“I have appointed a mediator to work with all the parties. This is a very complex issue that centers on money and forgets about access to immediate healthcare for patients. … UMMC says they should be paid more for these services. Blue Cross says rates will go up if they get the higher reimbursement rate that UMMC wants.

“These are valid concerns, but the UMMC can ask for a lower increase in their payments, and Blue Cross & Blue Shield (of Mississippi) is certainly able to pay more than they are paying now without raising rates to policyholders,” he added.

Chaney warned of where healthcare could go in the future if the dispute is not resolved.

“We all know that the only thing that keeps insurance rates and health care costs in check are networks,” he continued. “Without networks healthcare providers like the university medical center can charge any price they want to treat patients, which they are doing now. I pray that this is not the future way of healthcare of telling patients to pay what healthcare providers demand or whatever else they want for medical care, even if it happens to be hundreds of miles away — because that is where they will have to go if they are told they will not take their insurance.

“What we are headed for, folks, is socialized medicine if we are not careful,” he said. “As I stand at this podium today, I am calling on both the university medical center and Blue Cross & Blue Shield of Mississippi to act responsibly and immediately settle this dispute and put patient care as a top priority.”

Outside of health insurance and hurricanes, Chaney said the big issue during the next session will be pet insurance.

“We’ll probably have legislation this session that will clarify that people that sell supplemental health care products can also sell pet insurance,” he said.