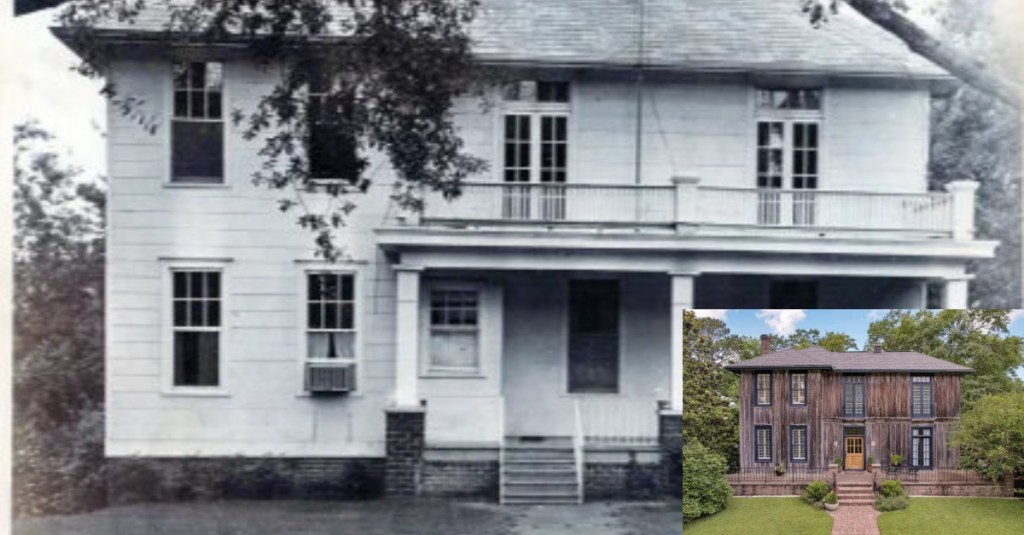 The home at 3400 Drummond St., commonly known as the “Cypress House” was built in 1913 by William K. and Willie McLaurin and was designed as a clapboard house with a one-story porch (as seen in the first photograph) by M. J. Donovan and built by H. H. Havis, contractors, for $5,400.

McLaurin was born in Smith County and studied law at Mississippi College. He then began a practice in Rolling Fork. On May 16, 1885, McLaurin killed Sharkey County Chancery Clerk S.F. Shelton in a duel in Rolling Fork.

The Vicksburg Herald reported that they learned of the duel from a young man whom William had sent to Brandon, via Vicksburg, to tell his brother about the event. They quoted the man as saying that “this difficulty is the outgrowth of bad blood which originated between Shelton and H.J. McLaurin, a brother and partner of William K., when Shelton defeated him in the election for circuit and chancery clerk.

“It was thought at that time that trouble would ensue. The matter blew over, though a coolness existed between them and thus matters stood until the fateful Wednesday, when W.K. McLaurin desired an acknowledgment made on some papers in a case of which his firm had charge. Mr. Shelton declined to acknowledge the papers unless his fees were paid in advance. Mr. McLaurin reported to Judge North in open court that the clerk had refused to acknowledge his papers, and asked that he be required to do so. Mr. Shelton remarked that no one but a fool would make any such a proposition to the court. Mr. McLaurin replied, ‘You are a liar.’

“The judge here interrupted them and fined each of them $10. On the next Thursday morning, an individual brought to Mr. McLaurin a note of a very strange character purporting to be a challenge, but which had no signature to it. The individual said Mr. Shelton sent it. Mr. McLaurin took the note and sent it through a friend to Mr. Shelton to ask him if he wrote it. Mr. Shelton told this gentleman that he did. Mr. McLaurin then sent a message to Mr. Shelton stating that he was then sick in bed, but that he would answer his note as soon as he was able to get out.”

Apparently, by Saturday, McLaurin was feeling better and sent a note to Shelton because this same young man saw McLaurin at “about half-past 7 o’clock coming out of his office with a shotgun in his hand. I suspicioned that something was up and did not speak to him. A short distance from me he passed Mr. Shannon, the city marshal, who asked him if he was going bird hunting, when McLaurin said yes, and passed on, going up the railroad track unobserved by the citizens, except a few of his personal friends who had an inkling of what was up. About 15 minutes after, S.F. Shelton was observed leaving the clerk’s office with a shotgun on his shoulder and going in the same direction.”

A single gunshot was heard and when Deputy Sheriff Orndorff arrived at the scene, Shelton was lying on his back with his gun lying alongside of him pointed in the direction of where McLaurin would have stood, and he was dead.

When the deputy picked up Shelton’s gun, according to The Post, “it was at full cock, and by some means accidentally went off, coming near shooting an old negro who was standing by.”

The Vicksburg Post reported that at the jury of inquest, three men saw the duel, one of them describing that “he saw McLaurin standing on the railroad track, and saw Shelton going towards him. Shelton halted and said: ‘How much closer do you want me to come?’ McLaurin said, ‘Five, or 10 steps.’ Shelton had his gun in his hands, but not raised, and made a movement as if making a mark on the ground with the toe of his shoe and the same instant he saw McLaurin fire and Shelton fall.”

The jury found that Shelton met his death by a gunshot wound inflicted by W.K. McLaurin, who was placed under $3,000 bond to appear at the next term of the Circuit Court.  The Post reported on November 26, 1885, that “the current rumor in Rolling Fork is that the Grand Jury now in session at that place ignored the charges against Mr. McLaurin, who some months ago killed Mr. Shelton in a duel. It is also stated that public opinion is very decidedly in favor of such action of the Grand Jury, it being generally believed that the difficulty was not of Mr. McLaurin’s seeking and that he had borne himself with propriety throughout its unfortunate circumstances.”

In March 1888, William and his brother, Walter, opened a law practice in Vicksburg. Walter would shortly become the railroad commissioner and from 1896 to 1900, William was the circuit judge. In 1903, he was elected to the state senate for two terms, ending in 1911.

William and Walter were two of seven McLaurin brothers who were well-known in Mississippi politics. Anselm was the governor of Mississippi from 1896 to 1900 and a U. S. Senator from 1894-1895 and 1901-1909. Brother Sidney was the comptroller of Mississippi banks and served in the U. S. Treasury Department during the Cleveland administration. Albert was a doctor, Robert Sylvester was a district attorney, and the other brothers were also lawyers.

William McLaurin fell from the Big Black River Bridge on Nov. 1, 1915, while inspecting it with engineers. He was the county attorney at the time and wanted to inspect the defective bridge piers for himself. Engineer Sillinger and McLaurin were crossing the bridge on foot, although they had been warned that it was very dangerous. Sillinger stated to the Commercial Appeal that “he was within two feet of Judge McLaurin when he appeared to lose his balance and then fell from the planks, giving one scream as he fell through the iron bracing and underwork supporting the bridge.”

Sillinger further stated that “I made a desperate effort to catch hold of Judge McLaurin as he fell, but was unable to do so. I suppose possibly I would have been pulled over with him had I caught his clothing as I realized instantly the terrible accident as imminent, but of course, I would have held on, had I been able to reach Judge McLaurin’s clothing.”

The Stamms added the cypress board and batten siding and removed the porch. In 2019, it was sold to Andy and Ann Andrews.