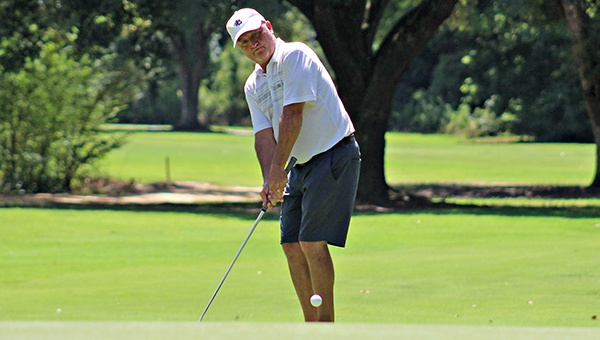 Jeff Harpole chips onto the 16th green Sunday during the final round of the Warren County Open at Clear Creek Golf Course. Harpole shot a two-round total of 141 to win the tournament for the third time in five years. (Ernest Bowker/The Vicksburg Post) 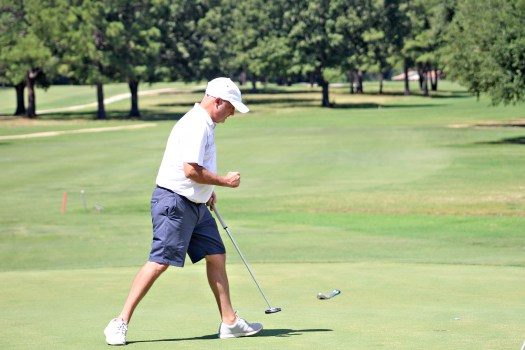 Jeff Harpole pumps his fist after sinking the winning putt on the 18th hole Sunday during the final round of the Warren County Open at Clear Creek Golf Course. (Ernest Bowker/The Vicksburg Post) 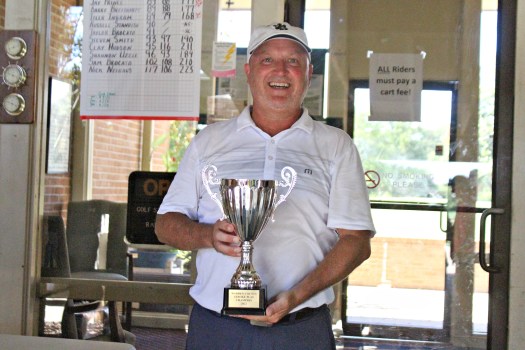 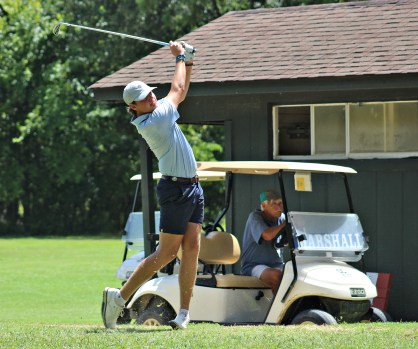 Luke Yocum hits his tee shot on the 15th hole Sunday during the final round of the Warren County Open at Clear Creek Golf Course. (Ernest Bowker/The Vicksburg Post) 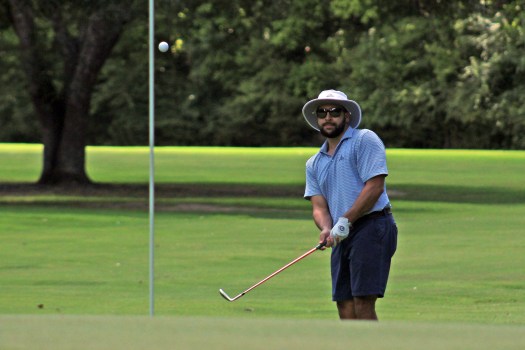 Garbiel Riveros chips onto the 16th green Sunday during the final round of the Warren County Open at Clear Creek Golf Course. (Ernest Bowker/The Vicksburg Post) 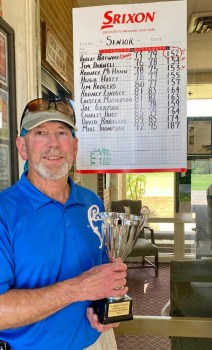 Robert Portwood shot a two-round total of 152 to win the Warren County Open Senior championship on Sunday. (Submitted to The Vicksburg Post)

All weekend long, by his own admission, Jeff Harpole’s putting stunk.

Of the 141 shots he took across 36 holes in the Warren County Open, about 50 were putts. For a golfer who relies on precision and accuracy to win, it was not a good formula.

So after he drained a short but difficult putt on the 18th hole Sunday at Clear Creek Golf Course, it was no surprise that Harpole let out a visible sigh of relief and a celebratory fist pump. He’d fought through two days of adversity to conquer not only his own struggles, but the rest of the field as well.

Harpole’s 6-foot par putt on the final hole sealed his victory in the Warren County Open by one shot over defending champion Luke Yocum.

“Yesterday I hit 14 greens and shot 1-under and I had 30 putts. My putter was just no good. Today I hit eight greens on the front nine and shot 1-over. My putter was just non-existent,” Harpole said. “When I got to the back nine i gave myself a little motivational talk at the turn. I said you’re hitting good putts and they’ll start going in. I made some putts on the back nine. I made them when they mattered.”

Harpole is the fifth person to win the tournament at least three times in its 41-year history. He also finished second in 2020 and 2021.

The 52-year-old Harpole outlasted the much-younger Yocum and Gabriel Riveros in a daylong duel decided on the final few holes. Yocum finished with a total of 142 and Riveros with 145.

Harpole’s championship was the result of not just finding his putter in the nick of time, but using it to author an incredible comeback over the last eight holes.

Yocum birdied the first and third holes Sunday to quickly extend a two-shot lead entering the round to five. Yocum still led by three after both he and Harpole made par on the 10th hole, and then Harpole got hot.

“I didn’t hit it in the greatest spot. I wanted to leave it just short of the green, kind of where he hit it,” Yocum said. “I missed it just right and caught what I would say is the unfortunate break. It was a little wet and I had a lot of mud on my ball, and it came out dead.

“I left myself with the toughest two-putt on the whole entire golf course,” Yocum added. “I hit two putts the way I wanted and they just didn’t drop. Sometimes that happens.”

Riveros was also in contention, down one shot to the leaders, but made double bogey on 16. He also bogeyed No. 15 to fall off the pace as Harpole made his move. The last of his four second-round birdies was on No. 10.

Yocum bounced back with a clutch birdie on No. 17 to cut his deficit to one stroke and give himself a chance heading to the final hole.

“The bogey on 16 hurt, but it was a good bounce-back on 17 to give me a chance,” said Yocum, who shot a 69 on Saturday and 73 on Sunday. “All I needed was one chance. One shot is a lot easier to make up than two. Unfortunately it didn’t happen.”

Both players landed their second shot off the green on No. 18, Harpole to the right and Yocum to the left. Both hit their chips about 6 feet from the hole, and both made their putts for par, but the two-shot swing on 16 proved to be the difference.

“That up-and-down on 18 was the best up-and-down I had all weekend,” Harpole said. “I told (playing partner Hunter Simrall) when we were driving up the fairway, ‘I just gave it to him.’ There was no ‘I’m getting up-and-down from back there.’ Then I hit a great chip and made that 6-footer.”

This year’s county championship was a flip-flop of last year, when Yocum shot a tournament record 132 and won by 12 strokes over Harpole.

This time, it was Harpole’s day.

“He hit the ball a lot better than I did all day,” said Yocum, a Porter’s Chapel Academy graduate who now plays college golf at Meridian Community College. “Arguably, he was just the better golfer today and that’s all it came down to. He made less mistakes and made putts when they counted.”

After Harpole, Yocum and Riveros slugged it out for the top three places, Hunter Simrall finished fourth with a score of 147 while Joel Greer and Austin Neihaus tied for fifth at 149. Kevin Neihaus and Stephen Olier tied for sixth at 150, and then Caleb Davis (151), Stephen Riddick (152), Charles Waring (155) and Keith Ehrhardt (160) rounded out the championship flight.

A total of 57 golfers played in the tournament, and they were split into five flights of about a dozen players each after Saturday’s first round.

Hartley Sullivan shot a 148 to win the first flight; Jim Warren totaled 160 to win the second flight; and Tyler Ingram won the third flight with a 168 total.

In the Senior Championship, Robert Portwood rode a strong first round to a one-shot victory over Rodney McHann. Portwood shot a 73 on Saturday and 79 on Sunday for a total of 152. McHann went 78-75 to finish at 153.

Jim Darnell was third in the Senior division, at 154.