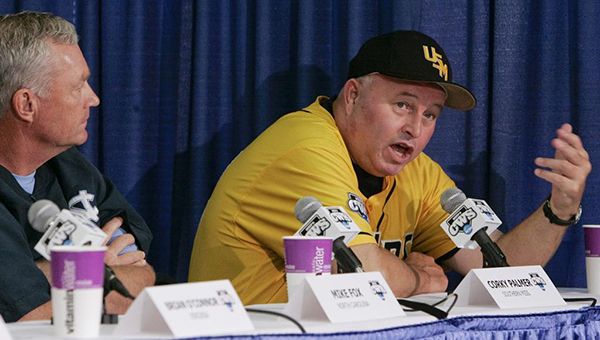 HATTIESBURG — Corky Palmer, a legendary Mississippi baseball coach who led Southern Miss to its only College World Series appearance, died Wednesday, the university announced. He was 68.

Born in Hattiesburg, Carlton Devan “Corky” Palmer had several stops in his baseball career but was associated with Southern Miss’ program for most of his life.

Palmer played catcher at Southern Miss from 1974-77 and was a team captain his senior year. He later returned for two seasons as an assistant coach in the mid-1980s and then as head coach from 1998 to 2009. He led the Golden Eagles to the College World Series in his final season as head coach.

Palmer also coached at Newton High School, Lee High School, Columbia High School, and Meridian Community College before his time as Southern Miss’ head coach. He won more than 400 games at Meridian and took his teams to three NJCAA World Series. His 1996 squad was the national runner-up and the 1994 team finished third.

At Southern Miss, Palmer had a 458-281 record. His win total is the third-best in school history, behind only his successor Scott Berry and predecessor Hill Denson. Including high school and junior college, Palmer won 946 games as a coach.

Palmer is one of only four Southern Miss baseball coaches to hold the spot since 1959. He was inducted into the Mississippi Sports Hall of Fame in 2011, and is also a member of the Southern Miss M-Club Hall of Fame.

“The University of Southern Mississippi family mourns the loss today of Golden Eagle baseball coaching icon Corky Palmer. While our hearts break at the notion of his special presence not being with us, we do take solace that he has moved from suffering to a rightful and well-earned eternal peace,” Southern Miss interim president Dr. Joe Paul said in a statement. “I am fortunate to have been blessed to claim Corky as my Southern Miss classmate and my friend. His impact on generations of young men ripples out into the world of baseball and beyond. Corky was definitely one of a kind, and we will honor and cherish his memory here at Southern Miss always. To his wife Debbie, brother Ted and all the Palmer family, and to the many Corky treated as family, we offer our most heartfelt condolences and the University’s support.”