LOOKING BACK: B.B. Club is but one branch of Vicksburg’s Jewish roots 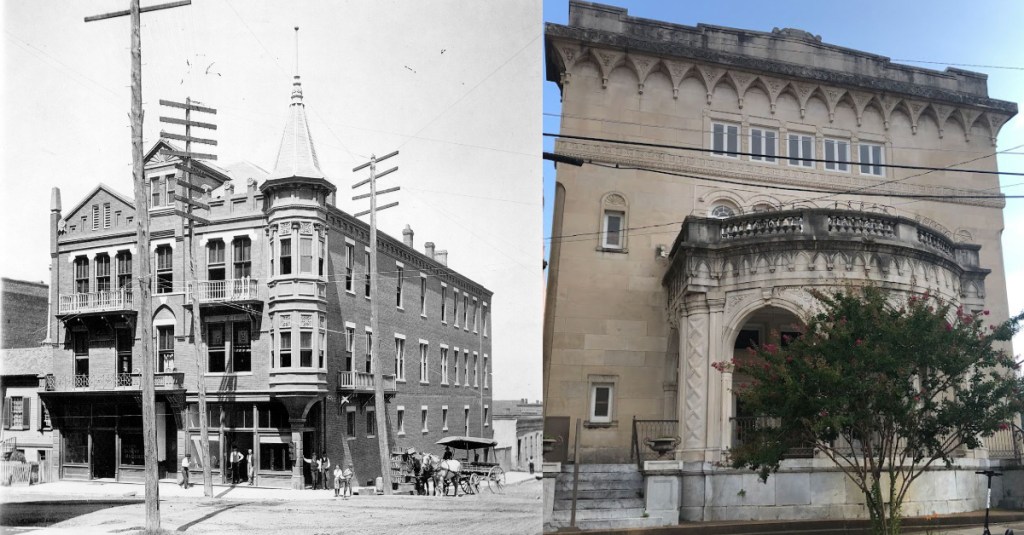 LEFT: The first BB Club building burned in May 1915. RIGHT: The B.B. Club building as it's known today was constructed in 1917. (Photos Submitted)

In 1886, the Jewish congregation, Anshe Chesed, established its social organization, the B’nai B’rith Literary Stock Association and leased the Balfour House for its clubhouse.

By 1890, the association had decided that it needed larger quarters and they commissioned architect William Stanton to design a new building. In October 1892, the new building was opened with retail on the first floor; a library with $5,000 worth of books, a parlor, a reception area, a banquet hall and billiards room on the 2nd floor; a ballroom with a stage on the third floor and Vicksburg’s first swimming pool in the basement. Here they held parties, dances, plays, children’s activities, bazaars and fundraisers for public benefit.

The story of Jewish people in Vicksburg is an integral part of the story of the city itself. When Vicksburg was incorporated in 1825, with a population of 3,000, there were approximately 20 Jewish settlers.

They had immigrated from Bavaria, Prussia and Alsace Lorraine. These families worshipped in private homes with various lay leaders conducting services. More Jews arrived in the next 20 years, including the three Sartorius brothers who brought with them two Torahs.

In 1862, 50 Jewish families formed the Hebrew Benevolent Congregation Anshe Chesed and received a charter from the state of Mississippi. Tradition holds that the leader of the congregation at this time was Bernard Yoste, a native of Charlesville, France. He provided the first public site of worship by erecting a hall over his business on Levee Street (not extant).

On July 29, 1868, the congregation bought a lot on the east side of Cherry Street, near the corner of Clay Street, for $3,500. Here, they erected the first synagogue to be constructed in the state. The Gothic edifice was completed in 1870 and served the congregation until 1969 when a new temple was constructed near the cemetery. The historic temple was demolished in 1983 after numerous attempts to save it.

The Jewish population grew quickly from 50 families in 1862 to 520 individuals in 1878. Tragically, Temple Asnhe Chesed buried 46 members during the Yellow Fever epidemic of 1878, including their rabbi who had attended the faithful since 1866.

Jewish men and women were business owners, physicians, lawyers and teachers. They served in the administrations and public institutions of Warren County and the City of Vicksburg and worked to promote the progress of their city.

The majority of Jews in Vicksburg were engaged in retail and wholesale businesses and as cotton brokers or factors. In the 1866 city directory, 90 Jewish families owned 35 stores. Some of the largest commercial concerns were owned by Jews. These merchants included the Blum, Schwatz, Leyens, Ehrman and Rice families.

Vicksburg was the largest city in the state until 1910 and this success was due in part to its location on the Mississippi River and railroad lines, but it can also be attributed to the diligence of these entrepreneurs.

An 1895 advertisement designated the Ehrmans as the “Largest Meat Dealers in the South.” Charles Ehrman and his children owned a chain of nine meat markets and Charles also served in the Mississippi State Legislature.

Abraham, Isaac and Lazarus Baer started the Baer and Brothers Dry Goods Store in 1865, and by 1871 they employed 70 clerks. When Louis Bloom, who was associated with Baer and Brothers, died in 1926, he left $6,500 for a memorial fountain.

This statue of Hebe (daughter of Zeus) stands today at the end of the Memorial Rose Garden in downtown Vicksburg.

The Cotton Exchange was founded in 1874 and incorporated in 1886. In 1890, there were 22 active members and nine were of the Jewish faith. Early in Vicksburg’s history, Jews were also physicians, druggists, lawyers, members of the Board of Trade (later changed to Chamber of Commerce), bankers, and served as directors on bank boards.

Early on, Jews also established benevolent organizations that provided support for all citizens, not just for Jews.  In 1841, the Jewish people of Vicksburg organized their first benevolent organization: the Men of Mercy, the beginnings of a congregation. Their purpose was to help the needy, the sick, the newcomers and the transient Jews. The oldest chartered ladies’ organization in Vicksburg is the Ladies Hebrew Benevolent Society, founded on April 3, 1866.

The Jewish population continued to grow and by 1905, there were 659 Jews, 4.44% of the population — the largest percentage in Vicksburg before or since. The number fell every year after and today there are about 20 members. The reason for the loss of members is due in part to the large percentage of mixed marriages and young people moving to larger cities, resulting in the loss of Judaism of many of the descendants of the early settlers and of those who settled in the 19th century.

The first B.B. Club was also lost. It burned on May 15, 1915, and was completely destroyed. After the fire, the association again rented the Balfour House for its headquarters and there they continued to hold parties and dances and rebuild its library.

They hired Leon Weiss, an architect from New Orleans, to design the new building to be built on the same lot as the old. The plans called for the elimination of the retail spaces on the first floor and to pull back the façade so that there could be a large portico. When the bids were received, the association said that they were higher than expected, ranging from $54,939 to $63,950. They eventually contracted with J.A. Burke Contractor who was the low bidder. They borrowed money and sold the Balfour House, which they had recently bought.

The new B. B. Club, which stands today, was completed in March 1917. The Vicksburg Post reported that it was the most beautiful building yet to be built in the city. The portico was built in white Georgian marble up to the floor line and the rest of the building is oolitic limestone. The first floor held the office and the magnificent library and parlor rooms which were lined with mahogany. The building was designed with beautiful windows that permitted the entire wall to be opened, allowing for great air circulation. The billiard room was finished in walnut and the banquet hall was reported as “magnificent in every detail.”

The Post reported that “It would be difficult to select one room in this building and say it was more beautiful than another, for each room has its own appropriate use and is perfectly designed for the purpose it was intended. The ballroom, however, because of its great size and extremely beautiful proportions and color effect and lighting scheme will attract most attention. The mezzanine balcony is beautifully decorated in high-relief plaster work, highly lighted with special care to produce additional relief. The stage is set in a beautiful frame with plaster also in high relief and highly lighted. The curved ceiling is ribbed with high relief plaster bands of leaves and buds, in each alternate bud being a frosted glass electric light. The cornice extending around this room is also of high relief plaster with brackets, architraves, and friezes.”

Vicksburg’s second pool was located in the basement which also held showers, lavatories, tubs and rubbing tables, all set in marble with tile floors and plaster wainscoting.

When she retired, the Fordice family sold the building to the current owners and it continues to be used as a beautiful place for gatherings and as a restaurant.