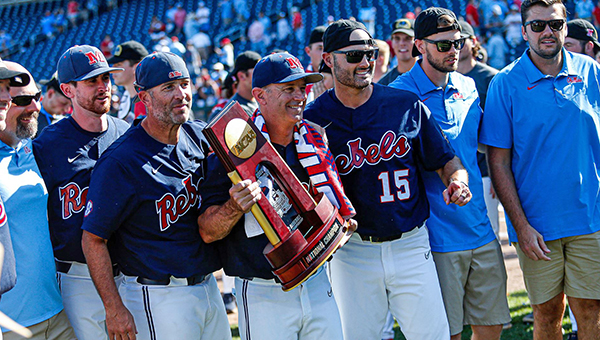 OXFORD — For once, Ole Miss baseball coach Mike Bianco can breathe easy about his job security during the offseason.

Four years is the longest contract allowed by Mississippi state law. It will keep Bianco with the Rebels through 2026. The new contract will pay him $1.625 million per year, up from $1.2 million a year in his previous contract.

The contract includes raises based on postseason performance, rather than scheduled raises, along with normal incentives. He would get a $35,000 raise for reaching a super regional, another $50,000 for getting to the College World Series, and $100,000 for winning the national championship.

The new contract will make Bianco the second-highest paid baseball coach in the Southeastern Conference. Only Vanderbilt’s Tim Corbin has a higher base salary.

“I appreciate Keith, Chancellor Boyce and our Board of Trustees for proactively and aggressively getting this done,” Bianco said in a statement. “I am ecstatic about continuing to lead this incredible program with the support of a community that means so much to Camie and me. I’ve said it before and I’ll say it again, there is no better fan base in the country. We’ve always known that but after what you guys did in Omaha, the entire country knows it — Rebel fans showed up and made a difference.”

Bianco’s job status has been an annual topic of conversation around Ole Miss. Despite having the highest win total in school history and third-most in SEC history, the Rebels’ postseason exits left many fans grumbling each summer. The team reached eight super regionals, but only one College World Series, from 2001-21.

That all changed this year.

After sneaking into the NCAA Tournament field as the final at-large team, the Rebels went on a magical run that ended with the College World Series championship. It was Ole Miss’ first national title in a men’s sport and turned all of the grumbling into cheers and accolades.

Following the season, Bianco was named the National Coach of the Year by D1Baseball, the American Baseball Coaches Association and Collegiate Baseball.

“We are blessed to have Mike Bianco as our head coach, and we intend for him to lead our baseball team for many, many years to come,” Carter said in a statement. “With his remarkable track record, no one was more deserving of that national title run than Mike. We have accomplished so much in every facet of our program, and under Mike’s leadership, we look forward to continuing that level of success and experiencing more championship moments.”