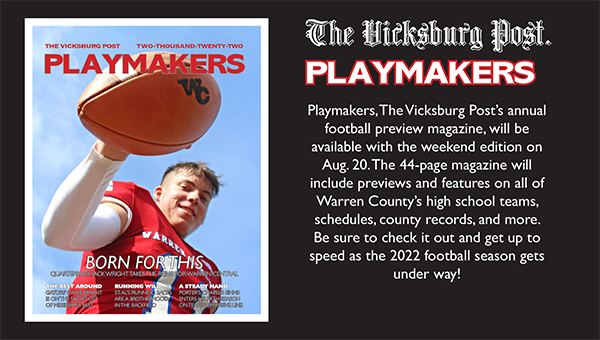 During his senior season as Warren Central’s starting quarterback, there are a lot of memories that Jack Wright is hoping to make.

Whatever the future holds, there is already one title he’ll always have and that no one can take away — cover model.

Wright won an online vote of Vicksburg Post readers to grace the cover of our “Playmakers” football preview magazine. The contest had four potential cover photos featuring Warren County players — Wright, St. Aloysius running back Padre Gray, Vicksburg High defensive end Caleb Bryant and Porter’s Chapel Academy offensive lineman Maureon Simms — and the one with the most votes was picked to be on the cover.

“I was really excited whenever I found out about it,” Wright said. “I was pushing for it, talking to my team and family and everybody I knew and asking them to vote for me. A bunch of people provided the help and it’s an honor to win.”

Wright took over as Warren Central’s starting quarterback about a month into the 2021 season and wound up passing for more than 1,200 yards and nine touchdowns. He led the Vikings to the second round of the MHSAA Class 6A playoffs and is hoping to take them even farther this season.

“I feel like we’re really well-shaped, and we’re all ready to win,” Wright said of the Vikings. “We’re all prepared. We’ve put in the time and the work, the blood, sweat and tears, everything. We’re ready.”

The same could also be said of the other cover photo finalists. All of them have distinguished themselves throughout their high school careers, both on and off the field.

Bryant is a four-year starter for Vicksburg, one of the top defensive line recruits in Mississippi, and has committed to play at the University of Utah.

Simms is a five-year starter on PCA’s offensive and defensive line who has played nearly every snap in that span.

Even though those three seniors will not appear on the cover of “Playmakers,” they will be featured in stories in the magazine. A couple of their alternate cover photos are also included.

“Playmakers” will be bundled into The Vicksburg Post’s weekend edition on Aug. 20, available to our subscribers and on newsstands around Vicksburg. If you miss it, we’ll have copies available at our downtown office at 1106 Washington Street.

The 2022 high school football season begins next Friday, Aug. 19, when St. Al hosts Park Place and Porter’s Chapel plays at home against Kemper Academy. The 60th annual Red Carpet Bowl follows a week later on Aug. 26, with the season openers for Vicksburg (vs. Germantown) and Warren Central (vs. Forest Hill) played as a doubleheader at Warren Central’s Viking Stadium.

Tickets for the Red Carpet Bowl are available through gofan.co. The cost is $10 in advance, or $15 at the gate, and sales are only through the GoFan site.

This is the 46th edition of The Vicksburg Post’s football preview edition. It’s hard to say exactly how many people have been on the cover in that time, but it is clear that Jack Wright will join a pretty select fraternity of local players.

“It’s just another thing to add to the book of memories,” he said.

Now let’s all go out and add a lot more pages to our own books, shall we?